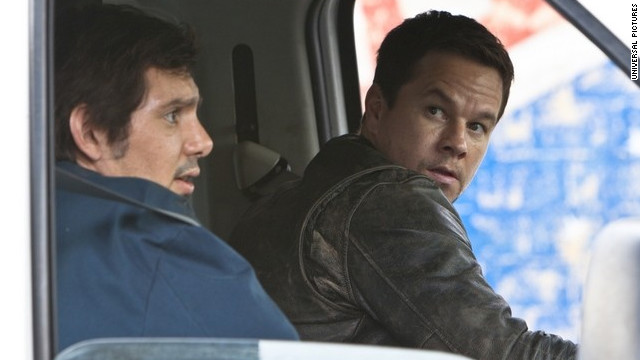 Sixty nine percent of CinemaScore's participants listed Mark Wahlberg as their reason for buying a ticket for "Contraband."

(EW.com) -- We're counting on Wahlberg to lead the way!

In a weekend that saw both the Mark Wahlberg thriller "Contraband" and Disney's 3-D re-release of "Beauty and the Beast" perform better than expected, it was the former that crossed the finish line in first place.

The R-rated "Contraband," which stars Wahlberg as a former smuggler trying to protect his brother-in-law from a drug lord, earned an estimated $24.1 million over the standard three-day weekend, and looks to finish the four-day holiday weekend with about $28 million. That's a solid start for the $25 million movie, a remake of the 2008 Icelandic thriller "Reykjavík-Rotterdam." It also represents Wahlberg's strongest solo debut since 2008′s "The Happening." (What? No!)

"Contraband" confirmed Wahlberg's ability to open a movie, as 69 percent of CinemaScore's participants listed the actor as their reason for buying a ticket. It received an overall "A-" from the tracking service's graders, indicating positive word of mouth. But the movie will have to contend with a number of action films in the coming weeks, including "Haywire," "Underworld: Awakening," and "The Grey."

A 'Mission Impossible' in the UAE

Hunt or Holmes? Which flick to pick?

In second was "Beauty and the Beast 3D" with $18.5 million for the three-day frame -- the largest January opening for an animated film (topping 2006′s "Hoodwinked"). Disney spent less than $10 million converting the 1991 classic to 3-D, so this kind of opening more than justifies the studio's decision to re-release the musical. It also bodes well for Disney's future 3-D re-releases: "Finding Nemo" in September, and "Monsters, Inc." and "The Little Mermaid" in 2013. "Beast" should finish the four-day weekend with around $25 million.

However, despite "Beast's" commendable performance, it's worth pointing out that it fell short of last September's "The Lion King 3D," which debuted to $30.2 million. That could be the result of several factors. For one, "King" was a much bigger hit in its original release, earning $312.9 million versus "Beast's" $145.9 million. Second, "Beast" has been out on 3-D Blu-ray since October, whereas "King" didn't come out on Blu-ray until after it returned to theaters. And "Beast" had a harder time attracting the interest of boys. According to Disney, just 31 percent of "Beast 3D's" audience was male -- compared to 44 percent for "Lion King 3D."

The weekend's third new release, the gospel-singing dramedy "Joyful Noise," drew a smaller congregation with $11.3 million over the three-day frame. The $25 million movie, starring Queen Latifah and Dolly Parton, is on pace for $14 million by Monday night. Those who saw the film loved it, though, as CinemaScore moviegoers handed the picture an "A-" rating. According to the tracking service, 73 percent of the audience was female, and 78 percent was at least 25 years old. A rep for Warner Bros. said the film performed particularly well throughout the South and Midwest.

One film that did not hang on well was last week's winner, "The Devil Inside." The R-rated horror flick plummeted 77 percent for $7.9 million. That's the largest second-weekend drop for a wide release since 2009′s "Jonas Brothers: The 3D Concert Experience" -- now there's a double feature for you! It's also the third-worst decline on record for a film playing in at least 2,000 theaters, behind 2003′s "Gigli" and 2009′s "Friday the 13th." But don't feel too bad for "The Devil Inside," as it has already consumed $46.2 million on a $1 million budget.

"The Iron Lady," starring Meryl Streep as former British Prime Minister Margaret Thatcher, expanded from five to 802 theaters and earned a respectable $5.4 million, which was just enough for 10th place.