Los Angeles (CNN) -- George Clooney and Meryl Streep appear to be main contenders in the 2012 Hollywood award season after Sunday night's Golden Globes. But the winners of the best film drama actor honors face competition from a silent film star and an actress who brought Marilyn Monroe back to life.

Clooney's "The Descendants" won for best drama film, while Clooney received the best actor in a drama film award.

"The Artist," a black and white silent movie, was chosen best comedy or musical film, while its lead Jean Dujardin won best actor in a comedy or musical movie. The movie's music also won for best original film score.

The Globes set the stage for a Meryl Streep versus Michelle Williams best actress showdown at the Academy Awards in six weeks by handing both women best actress honors. 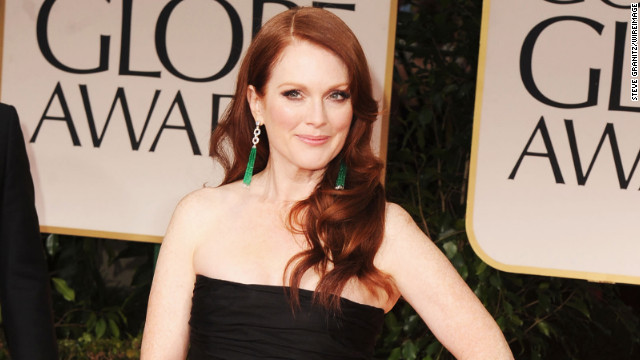 Since the Globes separates dramas from comedies -- unlike the Academy Awards -- Williams, Streep, Clooney and Dujardin were not competing against each other in the 69th annual Golden Globes award show.

"Thank you to the Hollywood Foreign Press Association for putting in my hand the same award that Marilyn Monroe herself won over 50 years ago," Williams said in her acceptance speech.

Oscar nominations will be revealed later this month and the Academy Awards follows at the end of February.

Other films expected to be Oscar contenders also got a share of the Globes spotlight.

Woody Allen's "Midnight In Paris" lost out to "The Artist," but Allen did win for best film screenplay.

The 3-D family movie "Hugo" was also passed up, but Martin Scosese got the best director award for making the film.

Who ruled the red carpet?

Spencer, who played a maid in the movie, quoted Dr. Martin Luther King Jr. in her acceptance: "All labor that uplifts humanity has dignity and importance."

Although the "Help" characters are fictional "they represent scores of real people," she said.

"The narrative itself is part of our fabric," Spencer said backstage. "It's important to keep the younger generation abreast of how far we've come, because this is really foreign to them."

Christopher Plummer won the Golden Globe for best supporting actor in a film for his role in "Beginners."

The best foreign-language film honor was awarded to the Iranian film "A Separation."

Pop icon Madonna took home a Golden Globe for writing the best original song in a movie. Her "Masterpiece" was written for "W.E."

She offered fitness advice to reporters backstage. "The best thing for your bum is dancing," the Material Girl said.

Early in the broadcast, host Ricky Gervais took quick aim at the Hollywood Press Association, the group that hired him to perform hosting duties for a third year.

Gervais, in his opening monologue, compared the Golden Globes to the Oscars, "but without all that esteem."

The Globes are to the Oscars "what Kim Kardashian is to Kate Middleton. A bit louder, a bit drunker and more easily bought," he joked.

The group of about 85 writers invited Gervais to host the telecast again this year despite -- or because of -- the controversy stirred last year by his take-no-prisoners jokes.

Unlike the Oscars, the Globes also honors television shows with 11 categories.

Showtime's "Homeland" was the only TV show to win two Globes. It won best drama series, while Claire Danes won the best actress in a drama series award.

Kelsey Grammer's Golden Globe may not be the biggest award given out Sunday night, but the actor may have been the happiest backstage where he revealed his wife is expecting twins.

Grammer won for best actor in a television drama series for his role as a corrupt Chicago mayor in the Starz series "Boss."

Kate Winslet won the Golden Globe for best actress in a made-for-TV movie or mini-series for her role in HBO's "Mildred Pierce." It was Winslet's third Globe. She won two in 2009, for "Revolutionary Road" and "The Reader."

Winslet was asked backstage her opinion of reports that Lindsay Lohan was in negotiations to portray the late Elizabeth Taylor in a film.

British actor Idris Elba won best actor in a made-for-TV movie or mini-series for "Luther." Backstage, he acknowledged that he's talked to producers about possibly becoming the next James Bond.

"Of course, I would be honored to play the part if it comes along," Elba said.

Sidney Poitier led a tribute to actor Morgan Freeman, who was presented the Golden Globe's "Cecil B. DeMille Award."

"You illuminate your presence, you infuse the characters you play with a real life three-dimensional aura," Poitier said. "You become the character, the character becomes you. So begins a process that captivates your audience."

Freeman, speaking backstage, said it was watching Poitier as a teenager that steered his path.

"Most of us need something to guide ourselves and Sidney has been my beacon, my guiding star," he said.