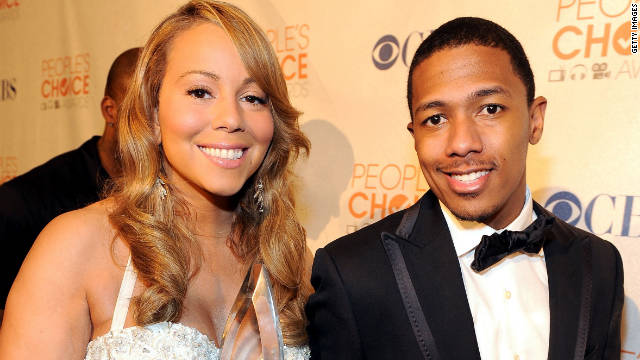 "You guys don't see her at 3 o'clock in the morning ... fixing me soup. Mariah Carey does that," Nick Cannon said.

(PEOPLE.com) -- Just over a week after being hospitalized for "mild kidney failure," Nick Cannon stepped out for the first time with wife Mariah Carey -- and praised her for being his "hero" during the ordeal.

"When times are hard, you guys don't see her at 3 o'clock in the morning, getting up in the middle of the night, fixing me soup when my kidneys ain't acting right. Mariah Carey does that," Cannon, 31, said onstage before presenting his wife with the Entertainer Award at the 2012 BET Honors taping, held Saturday in Washington, D.C. The show will air February 13 at 9 p.m.

Holding 8-month-old son Moroccan -- dressed in a matching mini tux -- Cannon gushed over Carey and at times appeared emotional as he reflected on the woman he calls "my angel."

"It is truly, truly a blessing to be here tonight, and I am humbled and in awe of everyone's presence, but mostly my hero right there," he said as Carey, 42, looked on from the front row.

"What most people don't get the opportunity to experience is the true woman; the virtuous person who is my angel."

A teary-eyed Carey soon returned the adoration, thanking God for having her husband and baby by her side.

"To my incredible husband who [has been] out of the hospital two days -- look at him all strong and healthy and big and too buff for the tux -- it's incredible," she beamed.

On the mend, Cannon even did an impromptu performance: beatboxing for his son.

"This is what makes Roc the most happy," said Carey, dressed in a form-fitting black and nude-colored gown. "And Miss Monroe Cannon's backstage, darling. We were both sewn into our dresses, so she couldn't make it out."