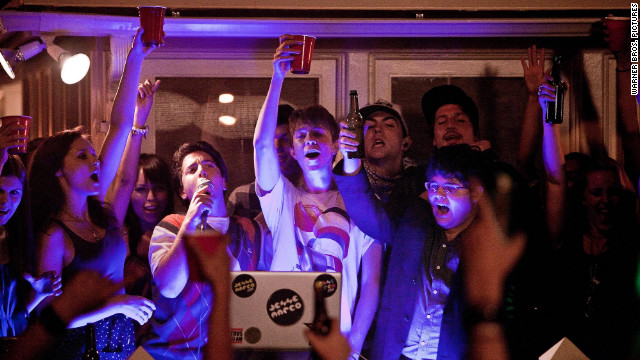 (CNN) -- Since "The Blair Witch Project," "Cloverfield" and "Paranormal Activity," it's been impossible to see a camcorder movie without steeling yourself for some monstrous horror lurking just offscreen. "Project X" is supposed to be a comedy, but parents with teenagers -- or parents with kids who may one day turn into teenagers -- will regard it with much the same mixture of dread and terror.

It's Thomas' 17th birthday. Mom and Dad have recklessly elected to take off for the weekend. Sure, they know he'll probably have friends over, but they trust him to use his common sense, and anyway, he doesn't have that many friends.

But they reckon without the influence of his determined buddy Costa, who puts all his considerable social networking skills to promoting what turns out to be the ultimate house party. Beer will be chugged, tequila slammed, pills popped (cherries too), furnishings trashed, cars crashed, there will be fire, SWAT teams and loud noise late into the night. Oh yes, my friends, the peace will be disturbed!

There's nothing new about any of this -- the wild party is firmly entrenched in youths' rites of passage in the movies and in high school lore across the land. In my day, it was Tom Cruise turning his home into a brothel and getting on the wrong side of Guido the Killer Pimp. Now, it's Thomas Mann orchestrating a rave in his backyard and stupidly ripping off a frazzled drug dealer by the name of T-Rick. (Kids, if you take away just one lesson from this movie, let it be this: There's no percentage in ripping off your dealer.)

Still, it seems to me Cruise was at least respectful of those working girls. To Thomas and the gangsta-mouthed Costa (Oliver Cooper), even their classmates are "hos" and "b*tches." If this movie has it right, today's teen culture is about what you would expect from a demographic brainwashed on a junk media diet of rap, pornography and reality TV. Please note, I said "If." "Superbad" seems almost quaint in comparison -- and a whole lot funnier, in my opinion.

Directed by newcomer Nima Nourizadeh from what must have been a stick-thin screenplay, "Project X" loses more than it gains from the "videography" gambit. It is indifferently acted and in too much of a rush for quick hits to establish anything like the lull and swell of a real rave -- there's no undertow, no rapture, just a randomized string of highs and lows.

Even the hangover is shortchanged (despite a producer credit for "Hangover" director Todd Phillips). That's not to say there aren't at least a few outrageous gags, YouTube moments to share, but mostly this looks like exactly what it is: a wasted opportunity.