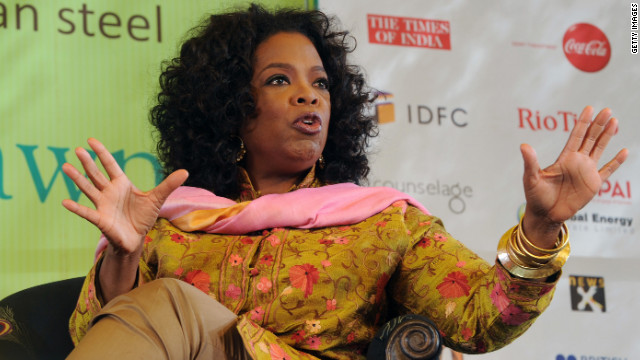 Oprah followed up with a flurry of defensive replies that were apparently in response to reader criticism.

(EW.com) -- Oprah Winfrey took to Twitter last night to ask Nielsen viewers to watch her cable network OWN, drawing criticism from some followers and investigative scrutiny from the ratings measurement company.

"Every 1 who can please turn to OWN especially if u have a Nielsen box," she tweeted Sunday evening at the start "Oprah's Next Chapter" and the mega-rated Grammy telecast. She later added, "Commercial Grammy people..u can turn to OWN."

That tweets caused a backlash on the social networking site, with readers accusing her of "begging for viewers" and being "desperate."

Oprah followed up with a flurry of defensive replies that were apparently in response to reader criticism: "The word 'please' is used as courtesy not a beg ... 'desperate' not ever a part of my vocab ... 'unethical' a little harsh don't u think? Seemed like it made sense to me. Sorry if u're offended."

As Deadline noted, networks are not allowed to specifically target Nielsen subscribers. It's policy prohibits "attempts to single out panel members ... to change their viewing habits."

"In accordance with our policies and procedures, Nielsen is reviewing this incident with our clients and we may withhold, breakout and/or make a note in the ratings," a Nielsen rep told EW.com. "We take any violation of our policy seriously and will work with clients to resolve the situation."

Of course, given that 39.9 million people watched the Grammys last night, with CBS crushing rivals, a more effective punishment might be releasing OWN's ratings instead of holding them back.

UPDATE: Oprah Winfrey released this statement: "I removed the tweet at the request of Nielsen. I intended no harm and apologize for the reference."