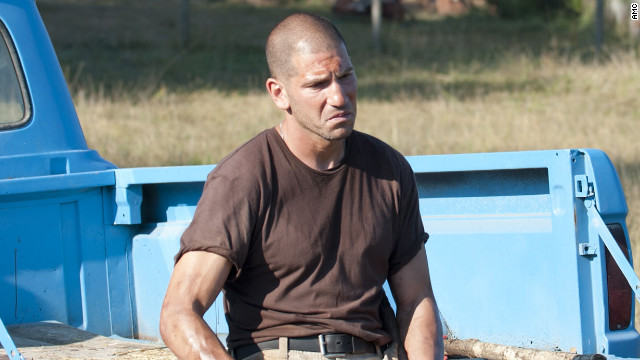 "What we've always been trying to do is a genre piece, a zombie show, but ... not be cute or campy," Jon Bernthal says..

(CNN) -- One of the more compelling aspects of AMC's "The Walking Dead" comes with watching a band of survivors try to figure out what right and wrong means in this new, zombie plague world they inhabit.

Of the lot, Jon Bernthal's portrayal of Shane Walsh has become one of the characters who wrestles with this the most in a world where there are no rules. At his core, Walsh is a jerk and a hothead who will turn to violence for problem solving.

But at the same time, his attitude seems like the sort of thing you might need to survive the next zombie attack lurking around the corner. Add in the idea that the woman he loves has gone back to her husband, and you have quite a complicated mess.

A veteran stage actor, Bernthal's TV credits include CBS's short-lived sitcom "The Class" and one-offs on shows like "How I Met Your Mother," "CSI: Miami" and "Numb3rs." Season two of "The Walking Dead" returned on Sunday, and CNN spoke with Bernthal about playing Shane Walsh and how actors typically work to construct the emotion on "The Walking Dead."

CNN: Shane's become a central figure in season two. How do you think he's changed over the course of the series so far?

Bernthal: It really takes a guy who is all too human and normal and you put him in these unusual circumstances and what comes out of him is crazy. Most importantly, I think he's the first character on the show to become a product of this new world. He discovers in season one, when he beats Ed by the side of the water, he discovers he can keep beating the guy because there is no law, there is no order. It's an unbelievably dangerous thing to discover. He realizes that you need to adapt to this new world order. For a guy who is so desperately trying to push down and bottle up his emotions and feelings, I think he genuinely feels that there's no place for them in this world. They'll only hold you back. It's such a good foil to Rick [Andrew Lincoln], who is led by his heart and trying to do the right thing. Shane looks at that as being weak. It's extremely interesting to play as an actor because here's this very emotional man going through this unbelievable emotional torment -- and sooner or later, you've gotta burst.

CNN: One of the questions with him has always been is this guy a jerk or just a go-getter in a zombie-plagued world?

Bernthal: All that goes back to [original show runner] Frank Darabont. That's what Frank really wanted to do. He saw this character that was very one dimensional from the comic and he said there's so much more here. The love affair is not just Shane and Lori. Rick and Shane are are two men that love each other as friends. Shane and [Rick and Lori's son] Carl is an unbelievable relationship. It's really this fractured and fragmented family that goes through these stages of loss and rebirth and they're changing all the time. It was really Frank that said this is the core of this story is not just a guy who everybody thinks is dead, comes back, finds out his friend is sleeping with his wife and goes crazy. It's a slow burn and so much more interesting to make human. Frank and I really set to change the viewers' opinion week in, week out.

CNN: Shane, more than anyone else, seems to think that the band of survivors he's with is not the end-all. That there might be a different path.

Bernthal: He's the first guy that talks about going out on his own. He's one of the only people that could. What's interesting about Shane is at the exact same time, he feels two things equally. Number one, unlike all the other characters, the people who he really loves in the world are very much alive. They're right there but he can't be with them the way he wants. Day in and day out, he wants to keep these people alive. At the same time, he's quite aware that his feelings for Lori and Carl are a bit of a cancer to the group and could eventually lead to a big breakdown between Rick and him. That relationship is starting to break down now, where we are in the show.

CNN: The obvious thing about the show is survival. But the emotions that exist in the nonzombie world and the zombie world, they don't go away just because former people want to eat your face.

Bernthal: That's it. What the zombie world does, the world of the apocalypse, what we want to create, it heightens things, it scrapes off the veneer and the comfort of everyday life and makes you deal with who you are and what your personality is. It poses a really cool argument to the viewer: which way is better? So far in season two, we've really made a case for Shane's way. In the rest of the season, we're going to see some validity to Rick's approach. The more "human" approach.

CNN: At the end of the last episode (of the first half of season two), when the zombies emerged out of the barn -- what was the mood on the set during that shooting?

Bernthal: We love the scenes where the cast gets to work as full ensembles and everyone gets to work off of each other. And when you get our group together and throw a whole bunch of zombies into it, you never really know what's going to happen. Ninety percent of those reactions that you see in the scenes and the interplay between the characters, that's not in the script. It's something Frank encouraged from the beginning. I think this group of actors and crew has figured out how to work as a unit and that scene -- it was a real chance for everyone to play their instrument.

CNN: How much is improv a part of this show?

Bernthal: What we've always been trying to do is a genre piece, a zombie show, but not wink at the audience, not be cute or campy. The only way you can do that is to really make believe really hard. Really reacting to it. If you're just waiting for your line ... that's a way of working, but the style of show we've developed is a little different. When actors come on this show, I think they say "oh my God, this is TV?" Because they see it's very loose. Everybody is going 100%, all the time. There's no such thing as being in the background. The beauty of it is, the stakes are freaking high. At any point a zombie can come out of the woods and eat your a** or somebody you love.