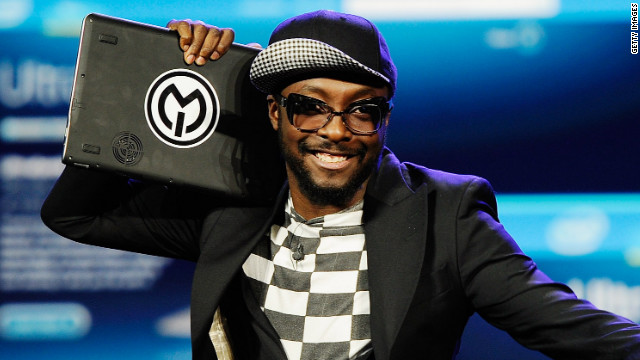 At CES 2012, Will.i.am announced that he's doing a global tour with Intel to promote its new Ultrabooks.

Editor's note: John Gaudiosi is co-founder and editor-in-chief of Gamerlive.tv video syndication network. He has covered video games for hundreds of outlets in the past 20 years and specializes in the convergence of movies and games.

Las Vegas (CNN) -- Most people know international recording artist Will.i.am (born William James Adams Jr.) as the producer and front man for The Black Eyed Peas, the Grammy-winning group that has performed at the Super Bowl and sold more than 18 million albums worldwide.

But Will.i.am is also a huge gamer and techie. When it comes to technology, he's much more than just a gear head. He actually visits NASA for rocket launches and works with nonprofits such as FIRST (For Inspiration and Recognition of Science and Technology) to encourage kids to build robots.

He also serves as Intel's director of creative innovation.

At the Consumer Electronics Show earlier this month, Will.i.am announced that he's doing a global tour with Intel to promote its new Ultrabooks. Fans will be able to follow his journey as he visits 12 countries in 12 months recording music and filming his adventures. He helped design the new willpower360 app, which allows viewers to experience the Ultrabook Project from any angle.

And -- and! -- not only did Will.i.am help create one of the top-selling music games this holiday season, Ubisoft's The Black Eyed Peas Experience, he actually helped Microsoft design the Kinect for Xbox 360 technology that powers the dance game.

The man behind the games chatted with CNN about his love of video games and tech at CES in Vegas. The following is an edited transcript of that conversation:

CNN: What's a favorite memory of playing video games when you were young?

Will.i.am: We were poor. We couldn't afford video games. So I would go to my friend Calvin and Douglas' house to play his Nintendo or Markey's house to play the Atari 2600, Intellivision or Colecovision. We'd always go to Markey's porch, and he used to have them there. We had to pay 15 cents to play one of his games, whether it was Pong or Combat. You remember Combat and having those graphics? Just think about that. Wow!

CNN: What did you think of the music in those old-school games?

Will.i.am: I remember playing Donkey Kong and Pac-Man and thinking, "Wow, who designed the audio for that?" Some guy was like, "Oh, shucks. When Pac-Man eats the ghost should it be booo-oomp!" I wonder what they were thinking when they made the audio.

CNN: Did game music influence you at all?

Will.i.am: I remember when Super Nintendo came and then the graphics changed and that was a big leap because you saw Mario from different angles. That was cool. I did a beat. I have a track where I sampled that game. I have my hip-hop Mario underground music. That's when he goes underground (in the game).

CNN: Did you play games as they got better over the years?

Will.i.am: Yeah. I remember Joust and then Q*BertC, right with the graphics started getting better and then there was Pole Position and Mike Tyson Punch-Out. That's when Nintendo started coming in. I loved Duck Hunt. Do you remember Gyromite? What was that all about? And then Zelda came out. That's when I was like it's all about video games. Zelda. Did you save the princess yet? Did you get the fairy? Where's the fairies at? Wow, that was like the dopest. And there was that little pond that you had to go to get some more lives and stuff. I loved that. I mean, that's my childhood from just video games.

CNN: What are you playing these days?

Will.i.am: My favorite game is Madden. That's it. I'm a Madden addict. I go at it. I design my own teams. People online always go, "I'm not playing you, you're a freaking cheater." And I'm like, "What are you talking about? You can design your own team too. We can just play with our own teams anyways."

CNN: Who's on your Madden team when you design them?

Will.i.am: Oh, I make names up like Little Whoop A** or Little Speedy. I make a little short guy that runs really fast; change his attributes and whatnot. I like big dudes, like 6-foot-2 quarterbacks. That's what I like doing. So that's why I play Madden.

CNN: Do you play any other games?

Will.i.am: I freaking love Grand Theft Auto. Don't have me play that because I don't even do the missions. I just like to see what I can do to make the cops come chase me and see if I can run from them. But Madden's my favorite.

CNN: What was it like working on The Black Eyed Experience game?

Will.i.am: Two years ago, I would go up to Seattle and consulted on Natal. That's what it was called before they coined it Kinect. Project Natal. So I'd go up to Seattle and put in all the work, when I finally saw the video game, I'm like, "Wow, that's what I was consulting on?" And my group got the benefit off of all that flying back and forth. I'd work with (Ubisoft) and say, "Oh, no, the dancing shouldn't be like this. We should make it so once I sit down the avatar shouldn't turn into a noodle. You got to fix it to like." And they'd work on that. And I'm like, "OK, cool. Also, it should have some type of gesture where the beat slows down and then the choreographer dance guy instructor tells you what you're doing wrong. You should have it do that. It should be real." And they'd work on that.

CNN: What impact have you seen your game have on fans?

CNN: What's your favorite piece of technology that you can't live without?

Will.i.am: Really I want to say my phone. I like my phone because that's the thing, but really it's my laptop. I can Tweet with my phone and I have all my addresses in it, but now it's backed up to my computer. So if I lose my phone, I lose it. It has a code (password) on it. Nobody's going to get into it. I just get a new phone and download. It's really my laptop that I can't live without.

CNN: How do you use your laptop creatively today?

Will.i.am: I've been making music on desktops and laptops for a long time now, so to use this Ultrabook, which is lighter and offers better performance is great. I love DJing with it. I love creating with it. If you imagine what it was like when Michael Jackson was making music, we used to make music in studios and the music played on the radio. Now you're making music on a computer and you listen to it on the computer. So just the idea of that is amazing.