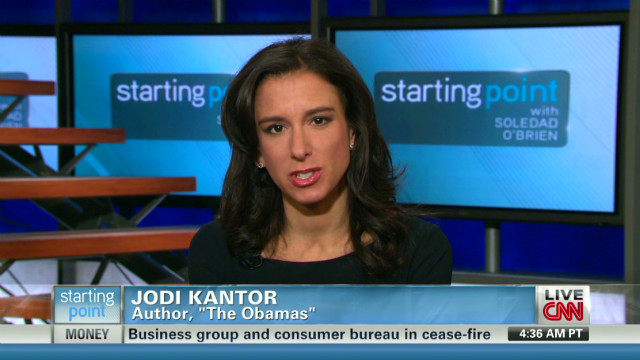 Washington (CNN) -- If you think the more than weeklong controversy over a new book about the first couple had died down, well, you'd be wrong.

"She seems nice," was Stewart's assessment of the first lady after reading "The Obamas," he told the book's author, New York Times reporter Jodi Kantor. "I'm surprised at the controversy," Stewart said, "because the book seems to portray Michelle Obama as a complex yet human individual struggling with this unbelievable situation yet remaining the moral compass and center of an administration trying to find its footing."

Later in the sit-down, Stewart tells Kantor "But I only read it because I thought there was crazy sh-t in there. You really disappointed me."

In a telephone interview with CNN on Monday, Kantor tried to explain the controversy: "The headlines in those [initial reports] did not reflect the book that I wrote," the Times' Washington correspondent said.

And Kantor responded to criticism from one of her principal subjects.

"The book does not call [the first lady] an angry black woman. Those words are never in the book," Kantor said of the soundbite that set off a second round of media coverage, "Nor is it insinuated."

"The Obamas" has come under criticism because the president and first lady were not interviewed for the book, and because passages in the book portray Michelle Obama as concerned about the support and advice the president was getting from some of his top aides.

The controversy began before Kantor's book was even formally released. When some media outlets got their hands on copies of the book early, the resulting coverage focused on what political observers call "palace intrigue" -- a moment when Press Secretary Robert Gibbs blew up and cursed the first lady and top Obama aide Valerie Jarrett, a moment when then-Chief of Staff Rahm Emanuel offered to resign (an offer that the president refused at the time), and the first lady's concerns about some of the president's top aides.

The White House hit back hard.

The book is "the author's take, reflecting her own opinions, on a remarkably strong relationship between the President and First Lady -- both of whom share an unwavering commitment to each other, and to improving the lives of Americans," White House Associate Communications Director Eric Schultz wrote in a January 9 post on the White House blog that bore the headline "Gossip in Wonderland."

Schultz continued: "The book is about a relationship between two people whom the author has not spoken to in years. In fact, the author did not interview the Obamas for the book so the emotions and private moments described in the book, though often seemingly ascribed to the President and First Lady, reflect little more than the author's own thoughts. These second-hand accounts are staples of every Administration in modern political history and are often exaggerated."

And as for parts of the book that portrayed moments of palace intrigue, the White House was equally harsh.

"And as those who have worked in this Administration will tell you, the scenes depicted in the book do not accurately portray how well the East and West Wings work together," Schultz also wrote on the White House blog. 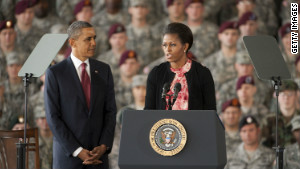 "The Obamas" is Jodi Kantor's effort to understand the impact of the first marriage on the presidency.

In a rare move, the first lady also personally responded to the book. While admitting she had not read it, Michelle Obama told CBS News that she wasn't surprised by moments in the book that portrayed her husband as telling his staff about her concerns. But the first lady rejected any suggestion that she was directly involved in the business of the West Wing, that she was unhappy in her role as first spouse, or that there was any tension between her and any of the president's top aides.

"I guess it's more interesting to imagine this conflicted situation here [in the White House], a strong woman, and, you know -- but that's been an image that people have tried to paint of me since the day Barack announced [his presidential bid]. That I'm some angry black woman."

The first lady also took issue with a distinctive storytelling choice made by Kantor in "The Obamas" -- the decision to give her reporting a kind of interior narrative quality that sometimes feels like you are reading a personal diary.

"Who can write about how I feel?" the first lady asked rhetorically during the CBS news interview. "Who? What third person can tell me how I feel?"

Kantor told CNN she requested an interview with the president and first lady but didn't let not getting one stop her from writing the book.

"A really strong principle of mine is that, as a New York Times reporter, I don't practice access journalism," Kantor said "At the Times we don't enter into reporting projects saying [for example], I'm only going to write about Mitt Romney's years at Bain Capital if he gives us an interview about it."

Kantor added that she has "years of covering [the first couple] under my belt" and that she did previously interview the president and first lady for a November 2009 portrait of their marriage that appeared in the New York Times Magazine. 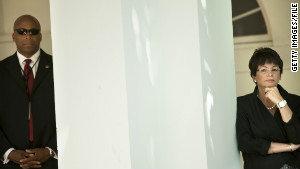 Obama aide and personal friend Valerie Jarrett, right, was interviewed for "The Obamas."

Kantor, who said she interviewed more than 200 people for the book, including current and former aides in the Obama White House, top Obama advisers, and close friends of the first couple, also said that her reporting process confirmed for her that she was learning information about the Obamas that had not been reported before.

"I worked to get an interview with [the president and first lady] up until the day the book went to the printer. And I felt that was what -- you know, that's my job. But I also felt that the stories that were coming from staff and aides were fresh, revealing stories that told as much or more as an interview might have."

And as for the book's tone, the New York Times -- Kantor's own newspaper -- took issue with her storytelling style. "Cue the groans," reads the Times' review of "The Obamas" after conveying a particularly diary-like moment in the book, "What kind of journalist presumes to know Michelle Obama's mind?" the review asks before quickly pivoting to declare that "In lesser hands 'The Obamas' would be an act of astonishing overreach but Ms. Kantor [through years of covering the Obamas] has earned the voice of authority."

Kantor told CNN the book's style resulted from how she approached interviewing people close to the Obamas.

"What I did do is really push in interviews to get friends and aides to describe how the Obamas were reacting to things."

And as for reporting about the book that played up the first lady's concerns about the advice the president was getting from some of his top aides, including Emanuel, Kantor told CNN her interviews revealed Michelle Obama and Emanuel "were philosophical foils."

"They had a distant relationship," Kantor continued, "and the relationship did have tension. .. The tensions are so indirect. There are all these messages passed back and forth between aides. And they also represent such different visions of where the presidency can go." 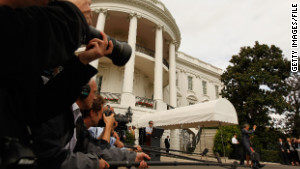 "The Obamas" has sparked controversy for its portrayal of how the first family adjusted to life inside the White House.

In the end, the controversy surrounding "The Obamas" may be the result of Kantor's frame of reference. Rather than taking the point of view of the president, Kantor chose to focus on the first lady and her partnership with him.

"I felt this was giving us a window into what this life [in the White House] was really like," Kantor said Monday, singling out a vignette in her book about how the first lady reacted to news of a minor security incident.

The window of a first lady's view on the White House and the presidency is a telling metaphor -- one that Kantor sought to convey early on in "The Obamas."

Soon after Barack Obama was elected in 2008, the Obamas visited the Bushes at the White House. While their husbands talked about economic stimulus, Laura Bush showed her successor around the private residence situated between the West and East Wings. According to the book, Laura Bush showed Michelle Obama a window in a sitting room used by past first ladies that looked out over the Rose Garden and toward the Oval Office.

"During her husband's critical meetings and long days at work, Laura Bush would stare out the window of her hideaway and feel somehow more connected to him," Kantor wrote. Laura Bush told Michelle Obama that Hillary Clinton had shown the window to her and that Barbara Bush had shown it to Clinton beforehand, and Michelle Obama should, in turn, show it to her successor as well.

Then Kantor writes in "The Obamas," "It was hard to think of a better symbol of the true duties of first ladyhood than that window: Keep a close eye on your husband. Do it quietly. There will be things about the presidency that only you will be able to see. on't expect to be at the heart of the action."