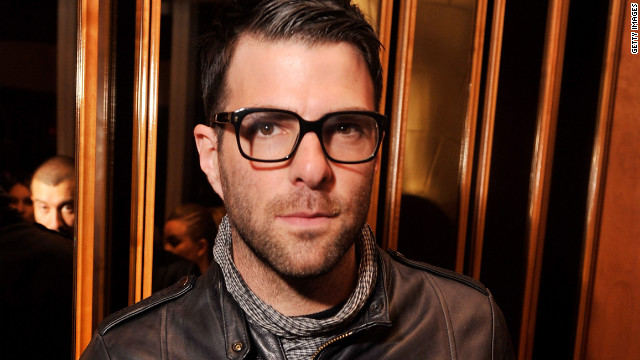 Actor Zachary Quinto is branching out behind the camera.

(EW.com) -- Over the past few years, Zachary Quinto has established his acting rep by playing Sylar in "Heroes," a couple of memorable roles on "American Horror Story," and, of course, Spock in the last two "Star Trek" movies. So you could describe his transition into producing as, well, "logical." Certainly it has gotten off to an encouraging start. Quinto produced director J.C. Chandor's financial crisis movie Margin Call through the actor's Before the Door company — the production outfit he runs with partners Corey Moosa and Neal Dodson — and exec produced Chandor's Robert Redford-starring "All Is Lost," which just screened at Cannes.

Through Behind the Door, Quinto has also produced the new film "Breakup at a Wedding," a nuptials-themed comedy which is told through the lenses of the wedding videographers. Directed by Victor Quinaz and starring Quinaz's brother Philip and Alison Fyhrie as the engaged couple this tale of a big-day-which-goes-horribly-awry is available on VOD from June 18.

Below, Quinto talks about "Breakup at a Wedding" and, below that, you can exclusively check out the movie's new poster here which was created by Tom Hodge (the designer responsible for the similarly eye-catching posters for The Innkeepers and Hobo With a Shotgun).

Entertainment Weekly: I'm guessing you're kind of happy to be talking about something which doesn't involve spaceships.

Zachary Quinto: Well, I've been having a great time talking about all that stuff, too. No complaints! But it's always good to promote other projects that I have going on. The great thing about this movie is that it really is a friends and family situation. We've known Victor and Anna (Martemucci, who cowrote the film with the Quinaz brothers) for years. And to be able to give them this opportunity and to bring all the other collaborators that they work with on a regular basis into the equation was really gratifying for us. One of our main tenets is providing opportnities for people that we've loved and have inspired us for a long time and Victor and Anna are certainly among them.

EW: The wedding comedy is well-tilled ground. What attracted you to the project?

Quinto: One of the other things that we're really focused on at my production company is innovative storytelling, whether that means the story itself or the style in which the story is told. In this case, we felt like, yes, the wedding comedy has definitely been done and done very well by other people already. But what we felt was fascinating about this script was taking the found footage mode — that tends to be reserved for more horror, thriller, genre projects — and applying it to this more traditional romantic comedy.

We're really excited to be working with Oscilloscope and obviously this poster that they've done up which is so incredible, to see all the faces of all of our friends in that kind of high art rendering, it's really gratifying. It's been all-round a really good experience and on the heels of everything else that I have going on.

EW: This film is different in almost every imaginable way from Margin Call. Was it a similarly different experience in terms of producing it? Or were many of the challenges and problems the same?

Quinto: It was very different to produce this, just simply based on the budget. I mean, Margin Call was about a $3.5M film and this is a half of a million dollar film. So we had less resources and less time. It was also different because it was our friends and literally their family—you know, Victor and Phil are brothers and Victor's mom is in the movie and Anna's mom is in the movie. It really was a friends and family affair. We had a lot of good times while making it but we basically holed ourselves up in a hotel out by JFK and just were there for pretty much two weeks banging away all hours and shooting multiple pages a day. It was definitely a brisk experience but luckily the style of the film allowed for that to happen. It was really fun, but definitely a brief encounter.

EW: Did making this movie alter your own views on marriage at all?

Quinto: [Laughs] Um...No. I think there's a tremendous amount of heart in the film and I think the journey that Phil and Alison take in the movie is one that is very relatable in terms of people entering into that institution. But I would say my views on marriage are ambivalent at best anyway so I feel like it's just sort of kept me in that same space.

EW: What's the one practical lesson you've learned as a producer?

Quinto: Not to sit in meetings where they're talking about actors and actors' value. There are certainly things I've learned as a producer that no actor should ever know. And the way that we are talked about in financing meetings and casting meetings is one of them. So I recuse myself of those conversations with financiers until my business partners are able to handle that part of it and then I come in.

EW: When you say the "value" of actors you mean their actual financial value to a project?

Quinto: Yeah. You know, we all have a number attached to our name and that number is different domestically than it is internationally. It's different in different territories and financiers really do break it down by those kind of metrics. It's horrible because you're talking about people and you're talking about talented people and to hear them talked about in such a broad and impersonal way can be really disappointing.

EW: Well, if it makes you feel any better, I feel like we've all got a number by our names one way or another.

Yeah, you're right. I guess that's true. It doesn't make me feel any better. But thanks for trying!

See the original story at EW.com.