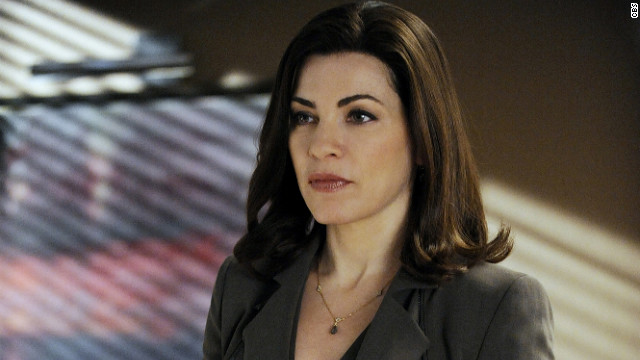 (EW.com) -- The "Good Wife" returns Sunday night (CBS, 9 p.m. ET), and while we're all eager to meet Kalinda's estranged husband Nick (check out our scoop on him here, and find out who was behind the door in the clip below), there's more to look forward to in season 4.

• The arrival of Nathan Lane. We'll also meet his recurring character, the firm's appointed trustee Clarke Hayden, in the season premiere. "He becomes a foil to everyone, but primarily Diane and Will," co-creator Robert King says. "We've been studying a lot about law firm bankruptcies, and when you want to restructure to give yourself relief from your creditors, sometimes a bank or court will order in a trustee. A trustee is someone who represents the creditors' interest, and he or she is brought in above the managers, or the partners in this case. He basically can veto any decisions of the partners." It's an especially interesting time for Will, who'll be practicing again now that his suspension is over. "Because they are in this kind of bankruptcy limbo where they have to make a certain amount to pay off the creditors in a certain amount of time, it's a very bad time to find a conscience. Just like we're all struggling with that in this economy: How much do you let your ethics lead, and how much do you let your pragmatism lead? Will's gonna be struggling with that almost daily." And don't forget about David Lee. "David Lee's someone who has new clout given this bankruptcy and the fact that family law is doing so well. Given the world of Lockhart Gardner and how much it's struggling, David Lee is a commodity and will have a lot of confrontations with the Nathan Lane character."

• Seeing more Cary. "We love Matt Czuchry. We felt we painted ourselves a little into a corner having him over at the State's Attorney's office. It really was good for cases when he was on the other side, and it was really good with the Peter relationship. We got to see what that developed into. But we feel so much better having him again in-house," King admits. "You just want to see more of him. You want to see more contact with Alicia, with Kalinda. So we feel we have a mature Cary coming back to the Lockhart Gardner fold. The irony, of course, is the moment he comes back is when things are just miserable financially over there. So it's both good and bad for him. Cary started as someone who was more pragmatic and then become more ethical over the last three years. We want to see how that plays out now in this new environment where it's kind of dog eat dog." And how will things be between Cary and Kalinda? "There's a difficulty there, because now Kalinda's husband's in town, and so, the Cary-Kalinda relationship isn't a straight line. It never has been, but it gets even more crooked," King says. "And I think the other thing with Cary is we want to see a little bit more of people's home lives this year. It's hard for the show to go too far in that direction, because it can't take you too far from other plot lines."

• Eli's focused again on Peter. "We felt we made a mistake with Eli last year. Sorry to admit it now," King says, with a laugh. "But the thing is, Eli seems to have more fun when he has one overwhelming goal for the year, as opposed to little goals. And the goal for the year is to get Peter elected governor. And Eli has never played in the big leagues like this before. And to see an Eli, who is unhinged, try to get Peter elected is just going to be very fun I think both for Alan Cumming and the audience, who will see him dealing with a lot that we see now nationally with Romney and Obama — the mix of serious issues but also being tainted by frivolous issues. How do you separate the two and should you? How do you keep what's frivolous in the public's eye so they don't start questioning about Peter's past with a prostitute or Peter's time in prison? It's not just a defensive game, it's an offensive game, and Eli becomes a master at that game."

• Jackie and Eli! "You're gonna see Jackie first in episode 4, and she's gonna have a stronger presence this year, partly because Jackie is someone who will use anything to get what she wants, and now she's using her potential illness as another weapon in her arsenal. The other thing is for the campaign, it's very important when you're going state-wide in Illinois that you get the senior vote. And Jackie can pull in seniors who would otherwise be reluctant to vote for someone who slept with prostitutes," King says. "So obviously, what we love about that is her fights with Eli. So Alan Cumming and Mary Beth Peil are for us a couple from comedy heaven. We want to see more of those struggles as they go through the campaign this year."

• A different kind of Peter. "The third season was a Peter who wanted to do things differently. This year is a Peter who really wants to win, and how do you keep your ethics when you really want to win? Do you just let other people around you do the dirty work for you, or do you engage on that?" King says. "Some of the issues from the year before will come back for him, supposed racism in his department and other issues. So what we want to see a Peter who has to deal with these things sometimes by ignoring them and letting Eli just handle them."

• How Peter's campaign affects Alicia. "There's a more engaged Alicia this year because she really wants her husband to win, too. Not for any power move on her part, but because she's afraid of what the opposition will bring," King says. But there are issues. Let's start with the kids: "Zach's 17, Grace is 15. Zach really wants to be involved with the campaign. Alicia doesn't want it. But at a certain point, the kids reach the age where they're not off-limits anymore. How do you keep them from being involved with the campaign when they're kind of being dragged into the campaign by the press?" King says. "And what we like about that is what it does for Alicia. Her natural instinct has always been to protect her kids, but then it becomes a question mark: is it really appropriate anymore to protect them as much as she wants to?" As the issue of race becomes part of the campaign, the fact that Zach is dating an African-American young woman could be useful. "The difficulty obviously is where does Alicia draw the line when she knowingly is being used: Do you just start having a jaundiced eye toward the fact, or do you really draw the line and say, 'I will not allow our family to be used this way?' And that's a struggle within Alicia because she's not a kid anymore and she's not naive about how the world works."

There's also Alicia's friendship with Maura Tierney's recurring character, wealthy businesswoman Maddie Hayward, who makes her first appearance in the second episode. Eli will want Maddie to endorse Peter. "The difficulty dramatically for characters on our show is where do you draw a line between the personal and the professional. And sometimes, more often than not, people don't draw the line. Everything that's professional is personal and everything that's personal is professional. And for Alicia, that's a very difficult balance. Sometimes she wants someone to be a friend and not there to be an agenda."