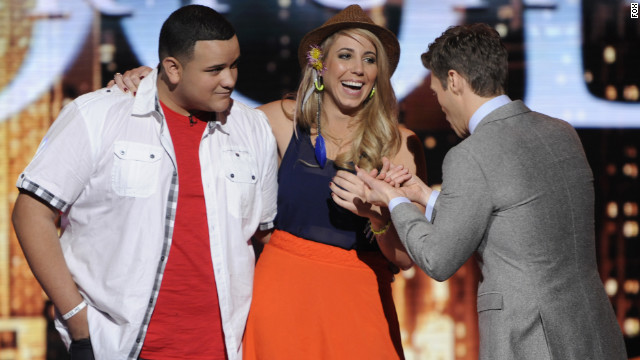 "American Idol's" Jeremy Rosado and Elise Testone find out who will be eliminated from the competition.

And with that quiet statement from a sparkly heeled Jennifer Lopez, Jeremy Rosado became the first Top 13 contestant to be eliminated -- judges' choice, remember -- from "American Idol's" 10th season. EW was on the scene at CBS Television City in Los Angeles for the live taping, and there is only one way to describe the vibe of Rosado's exit: totally emotional.

Rosado was on his knees during the pre-elimination commercial break -- and there was a sense that he knew what was coming the whole time he was on the stage, likely spurred by those harsh video comments from mentor-in-residence Jimmy Iovine.

(Although, to be fair, Iovine was harsh to nearly all the contestants and -- in one particular comment -- the entire human race.) Although visibly crestfallen at the news, it was a comfort to see Rosado smile while watching his exit video -- he even turned around during it and mouthed the words "thank you" to Lopez. After the taping was over, too, Rosado seemed to be a bit happier, as the judges and fellow contestants swarmed the stage to offer hugs and words of encouragement. "Go ahead, Jeremy, go ahead!" stage manager Debbie told him, as he ran off to give his father a hug before being whisked away to the bowels of the Idoldome.

After about an hour and a half of meetings and briefings at "Idol" HQ, Rosado -- who had bloodshot eyes -- made his way down to the press tent, where he talked to reporters about how he was feeling, his love for Jennifer Lopez, whether he'll go back to work at the doctor's office, what's next, and much more. Read a quick Q&A with an emotional Rosado here:

EW: How are you feeling right now? Reflect a bit for us.

Rosado: Jennifer Lopez has been behind me this entire way. Who gets to say that, you know? I've been crazy blessed. She came up to me tonight and told me she wanted to keep me. That makes you feel good inside to know that she believes in you so much. I'm so grateful to her. I'm so grateful to God for her in my life. I didn't technically get voted off, you never know. But it doesn't matter. I've been so blessed to know each and every one of these contestants. I love them -- they're my brothers, they're my sisters. I'm so happy that Elise got to stay. This is all our dreams. She deserves it."

EW: How did you feel about your performance last night?

Rosado: You know, I'm happy I get to leave on a high note. The performance yesterday may not have been my best, but I don't think it was my worst. I'm just so blessed to have had this opportunity."

EW: What's next for you?

Rosado: I want to eventually get a recording contract, maybe one day, maybe do some acting. This is just like the break-in to show business, right? This is the dream. Livin' the dream. So blessed.

EW: Take us back to that moment during the commercial break -- you were down on one knee.

Rosado: That's just me. I'm trusting the Lord for everything, this entire way. He's got me this far. I'm so grateful to the Lord for that and thank you, Jesus, for that. That commercial break, I went up to my brothers and sisters and the other contestants and gave them hugs and told them that I loved them. You know, I knew that they were not going to put me through. I felt it. Elise is amazing. She deserves to be here. You know, I'm just so happy to have had the experience.

EW: With the girls so strong this season, is there any chance that a boy will come out on top?

Rosado: You know what, everybody's strong. At this point, there's so much talent, I've got no clue who's going to win. They're all amazing. I love them.

EW: What did the judges tell you after the show?

Rosado: Randy told me to keep going and not to give up. Steven was a bit emotional, he just really hugged me. He really didn't have too many words.

EW: Would you possibly go try out for another singing competition, like The Voice or X Factor?

Rosado: You know what, "American Idol" was the dream, it is the dream for me, and I'm going to take what this show has done for me and use it to start my career, and I'm excited.

EW: Will you go back and work at the doctor's office?

EW: Have you gotten lots of texts and phone calls since the news tonight?

Rosado: I don't even have my phone. I'm sure its got some stuff in there.

EW: But surely you've heard from your parents?

Rosado: My dad was in the show tonight. He told me I did my best. He's devastated. I talked to my mom, but I know God's got some great plans for me. I'm just excited.

EW: What would you like to say to your fans?

Rosado: I want to tell everybody, all my fans -- Twitter, Facebook -- thank you for all the love and support. I love you more than you know. I'm so grateful, from the bottom of my heart, and I hope and pray that you guys stick with me. The best is yet to come. My best days are ahead of me. So thank you.

EW: Have any celebrities reached out to you?

Rosado: I remember Pia [Toscano, a contestant from last season]. She tweeted a picture of her crying while she was watching my performance. It was awesome. I just feel really blessed.

EW: What did you learn from this experience that you'll take with you?

Rosado: I've learned that I have the strength to make it through the show -- it's not easy, but it is the dream. I would do it all over again tomorrow if I could, if I had to. This has just been amazing. It makes you stronger.

EW: What will you do tonight?

Rosado: I want to go cry a little bit. I don't know. I've got to go pray. That's what I'm going to go do, is pray. Lay down, maybe drink some juice.

EW: But you'll be back to cheer them on, right?

EW: Who's the one to watch now?

Rosado: They all are. I can't predict the winner. There's so much talent, and I love them dearly. They're all going to be amazing.