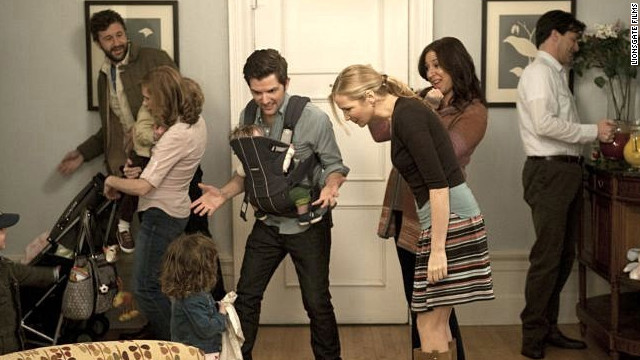 (EW.com) -- Much of the romantic comedy "Friends With Kids" is a funny dispatch from a very contemporary Earth; the remainder is a strange message from Rom-com-land.

In the inviting setup, Julie (writer-director-star Jennifer Westfeldt) and her platonic soul mate Jason (Adam Scott) lament the wearying effect that childrearing has on their formerly fun friends -- an emotion the child-free among us will recognize. ("Bridesmaids'" Maya Rudolph and Chris O'Dowd, Kristen Wiig and Jon Hamm play the mated breeders with élan.) Julie and Jason congratulate themselves on their free and sexy lives.

But the BFFs also discuss -- with the kind of graphic dialogue that, sigh, currently passes for equal-opportunity sex talk -- that time is running out to make a baby, so they decide to pop out a bundle of joy, share custody, and continue their respective romantic chases. And as sure as Harry was meant for Sally, they take the rest of the movie to arrive at the only possible conclusion for such a classically stacked premise.

The observations about parenthood, pro and con, are quick and smart, and Scott effortlessly steals the show, softening Westfeldt's brittle cuteness.

It's after baby makes three that the movie falters, as Westfeldt the storyteller arbitrarily metes out punishment or reward to her characters, tying Jason, and especially Julie, in knots of unlikely self-ignorance on the way to revelation (and a fair amount of speechifying). Also, the dialogue climaxes in a vulgar kicker that makes Harry and Sally sound like Shakespeare.

The childish stuff is unnecessary in a comedy for adults. B+