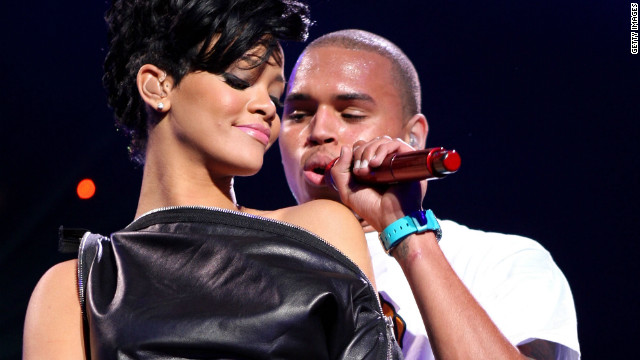 Rihanna and Chris Brown perform together in December 2008.

(CNN) -- The public has been shaking its collective head since rumors of a Rihanna-Chris Brown collaboration began circulating on the Internet last week.

Once the artists' respective remixes, "Birthday Cake" and "Turn Up the Music," featuring each other, hit the Web on Monday, that head-shaking turned into full-blown opposition.

Some have questioned why Rihanna would musically reunite with her ex and whether their working together was a straight career move or a byproduct of her feelings for Brown. But based on the way the "We Found Love" singer markets herself, industry experts agree, her decision to collaborate with Brown is actually quite characteristic.

"So much of (Rihanna's) music is about being in control of herself," said Tamar Anitai, the managing editor of MTV Buzzworthy. "Some of her fans have been really surprised by (her working with Brown again), but a lot of her other fans are so used to her making these big, bold statements."

Should Chris Brown be forgiven?

Rihanna has been in the game for a long time, Anitai said, and she wants people to know that she makes her own decisions. "This is her way of saying, 'I've made peace with my past.' "

Since he pleaded guilty in June 2009 to assaulting his then-girlfriend on the eve of the 51st Grammy Awards, Brown's career has flourished -- as has Rihanna's.

Country singer Miranda Lambert and HLN's Dr. Drew are among those weighing in on Brown's successes in addition to his troubles, including outbursts on Twitter and a reported tantrum after an appearance on ABC's "Good Morning America" last year.

A firestorm erupted when many women tweeted after this year's Grammy Awards that they would let Brown beat them.

But while the response to the pair's partnership has been overwhelmingly negative, their remixes have actually been well-received, said Ian Drew, Us Weekly's senior editor for music.

"Say what you will about them ... but when they're on a track together, it sort of lights up and ignites," Drew said.

Referencing Rihanna's "S&M," which shocked listeners with talk of chains and whips, he said that "these two are all about pushing buttons."

What is boils down to, Drew added, is whether people have the ability to separate the artists' personal lives from their music.

It's unclear what effect their collaborations will have on their careers. But the critics seem to be out in full force.

A recent Newsday story titled "Rihanna and Chris Brown deserve each other" states, "Apparently, Rihanna wants to show her independence and Brown wants to show that he can beat a woman and still get her to be friends."

And AJ Reynolds, who hosts Canada's Top 20 Countdown, said that all tracks featuring Brown have been pulled from the radio show after numerous parents complained.

The backlash couldn't have come as a surprise to the two artists. Music producer The-Dream, who wrote "Birthday Cake" with Rihanna, told MTV it was actually her idea to feature Brown on the song's remix.

"When she raised the question to me, I know she's not crazy," he said. "So my thought was, 'you've been thinking about this; you've already thought it out, so evidently you know what reaction you gonna get.' "

Despite the fact that Rihanna typically embraces her sexuality in her music, "Turn Up the Music" (which features the lyrics, "So let's go tonight and do whatever it takes to make it right") and "Birthday Cake's" explicit nature are a bit jarring, given the pair's history, said Bill Werde, Billboard's editorial director.

Even so, Werde said, he can't see Rihanna's career being hurt by the collaboration.

"If Chris Brown can rebound from (the assault) ... please don't tell me that Rihanna can't rebound from what some are perceiving as a lapse in judgment," he added.

In the end, fans reserve the right to support the artists or not, but onlookers have to remember, this is still a real and tumultuous situation.

"People have the tendency to forget that maybe this isn't some kind of contrived career move or a staged opportunity for PR," Werde said. "This media-saturated world is trying to make sense of a very, very human decision.

"I would like to think she's thought through the consequences, but I don't think she's making this decision with an eye toward her career," Werde added. "She's probably just thinking with her heart."