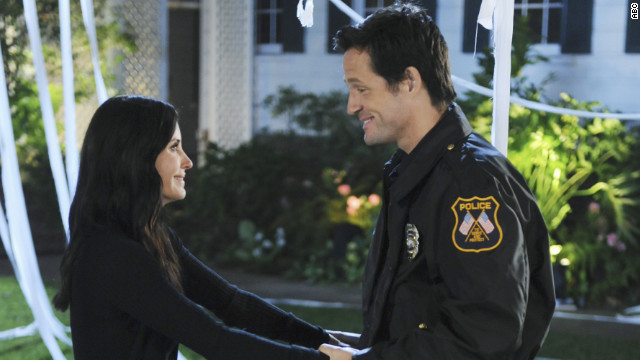 A much-delayed season three of "Cougar Town" finally kicks off on Valentine's Day.

(CNN) -- There's nothing like Valentine's Day to make single women feel insecure about their solo statuses.

Joely Fisher stars in the made-for-TV flick as a workaholic named Eve Lovett who backs into love's arrow.

The unavoidable romance occurs when a mysterious man (Jamie Kennedy) arrives on the set of her talk show with a strange proposition -- if Eve acts as a matchmaker for her viewers, his boss Cupid will help Eve find her true love, too.

Will the romantic mystery man make good on his promise? And how does Eve's handsome producer Rick (Roark Critchlow) fit into the scheme of things?

Find out when "Cupid" premieres at 8 p.m. Saturday, February 11, on the Hallmark Channel. "Cupid" will also repeat at noon and 8 p.m. Sunday, February 12.

Looking for more heart-centered programming in time for Valentine's Day? There's something for everyone. Read on for 14 more sentimental selections:

"Be My Valentine, Charlie Brown" (8 p.m. Saturday, February 11, ABC): Linus brings a box of chocolates for the teacher but Sally thinks the candy is for her in this 1975 animated hit. The flick will be followed by 2002's "A Charlie Brown Valentine" at 8:30 p.m.

"Victorious" (8 p.m. Saturday, February 11, Nickelodeon): The handsome members of Big Time Rush will host a "date night" featuring new episodes from "Victorious" and "How to Rock" at 8:30 p.m.

"Curiosity: Why is Sex Fun?" (9 p.m. Saturday, February 11, Discovery Channel): Actress Maggie Gyllenhaal hosts this revealing documentary about orgasms. For equally stimulating programming stick around for "Anatomy of Sex." It airs at 10 p.m.

"Once Upon a Time" (8 p.m. Sunday February 12, ABC): Cupid's holiday comes to Storybrooke, Maine, on this enchanted drama. And then at 9 p.m., the ladies of "Desperate Housewives" embrace Valentine's Day in their own way when Susan (Teri Hatcher) learns her daughter Julie (Andrea Bowen) is six months pregnant.

"House" (8 p.m. Monday, February 13, Fox): Chase (Jesse Spencer) takes on a patient (guest star Julie Mond), who is a cloistered nun on the verge of making her life-changing vows. But when a spark blossoms between them, Chase's patient questions her future.

"How I Met Your Mother" (8 p.m. Monday, February 13, CBS): Barney (Neil Patrick Harris) meets his match on a blind date in time for Valentine's Day and Robin (Cobie Smulders) and her boyfriend talk about the next level in their relationship.