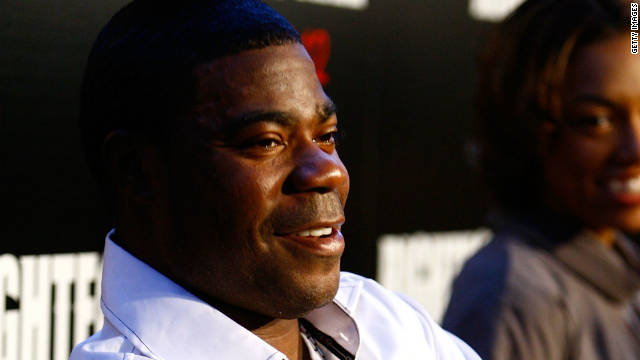 Tracy Morgan, 43, grew up in Brooklyn, but his mother moved the family to Youngstown in 1995, a decade after he left home.

Los Angeles (CNN) -- Tracy Morgan's mother says she struggled for years to provide the comedian with everything he needed as a child, but now that she's out of work and facing foreclosure he's refusing to help her.

Alicia Morgan, in a phone interview with CNN Wednesday, said she called her son last month to say she needed $25,000 to pay off her mortgage, but his assistant called back and told her, "Tracy would do a one shot deal of $2,000."

"I was so upset, I told her to tell Tracy 'Thank you, but no thanks. I am not some person on the street asking you for a handout, I am your mother,'" she said. "And that was the end of that."

His sister, Asia Morgan, said their mother needs his help soon "so she doesn't end up on the streets."

CNN e-mails and calls to Morgan's representatives seeking comment have not been returned.

Their mother lost her job last year, reducing her income to $600 a month and causing her to fall behind on her $400 monthly mortgage on her Youngstown, Ohio, home, her daughter said.

Tracy Morgan offered to pay her mortgage after she was laid off from her job last year, his mother said.

"I faxed him my account number and my mortgage papers," Alicia Morgan said. "I thought he was paying it, but after a few months I realized he didn't pay it off."

His mother said she heard through another relative that her son was angry about publicity given to the story.

"My nephew said that he spoke to Tracy and that Tracy said he wasn't going to pay me because I gave an interview," his mother said. "I never talked to anyone."

Their mother, now 62, says she has trouble walking, has diabetes and her unemployment benefits just expired.

"It took me 30 years or more to buy a home," she said. "At times I worked two to three jobs to support my children. They always got what they wanted, including Tracy. No one took care of them but me."

Tracy Morgan, 43, grew up in Brooklyn, but his mother moved the family to Youngstown in 1995, a decade after he left home, his sister said. He rose to fame as a "Saturday Night Live" cast member and now stars on NBC's hit sitcom "30 Rock."

"We have tried to get in contact with my brother Tracy, but he changes his phone number all the time, so we have no way of talking to him," she said.

His mother said she did not understand why Morgan "chose himself not to be with the family."