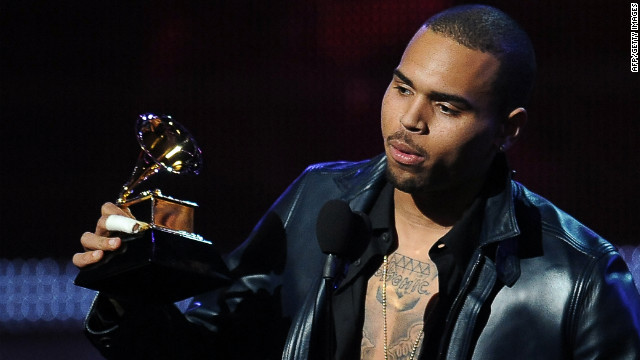 Singer Chris Brown's returned to the Grammys Sunday night after three years. His return reignited controversy about his domestic violence incident with Rihanna.

(CNN) -- It started for Sarah when she saw that singer Chris Brown was trending on Twitter Sunday night and decided to make a tongue-in-cheek joke.

She knew it was in bad taste but went for it anyway: "I'd let Chris Brown beat me up anytime :) #womanbeater."

Almost immediately, reaction began flooding the 22-year-old Brit's timeline. Strangers asked whether she considered domestic violence a joke, others suggested she deserved to be raped, while friends pointed out that the tweet was going viral in the United Kingdom and the United States.

"I was shocked at the response," said Sarah, who asked that her last name not be used. "I had no idea that people would read it that I actually wanna be hospitalized by him."

The outcry reached critical mass Monday, after BuzzFeed included her tweet in a roundup of like-minded sentiments under the title, "25 Extremely Upsetting Reactions To Chris Brown At The Grammys."

The post was the icing on the cake of a story that was already generating heated commentary, most of it directed at the Grammys for allowing Brown back onstage three years after he was essentially blacklisted over charges that he beat up then-girlfriend and fellow entertainer Rihanna. In June of 2009, Brown pleaded guilty to to one count of assault with the intent of doing great bodily injury.

Since Sunday, the two have kept quiet on the matter, with the exception of a tweet from Brown Tuesday night: "IM BACK SO WATCH MY BaCK as I walk away from all this negativity #teambreezygrammy."

While Sarah insists that she in no way condones any kind of abuse, she stands by the original intent of her comment.

"Having grown up in a household where [abuse] was present, I realize how serious it can be. Having said that, if I were to take offense to [every] joke that was made about things that have effected me growing up, I would be a very sad person," she said in an e-mail. "Being British, we have a much darker sense of humor and tend to let things go over our heads, which is probably why I've only received any response from the States."

Whatever the intention, a loud contingent of the public didn't find the tweets funny. "Appalling" and "scary" were among the mild terms applied to Sarah and her cohorts by those who say joking about domestic violence is dangerous.

"I think they're not aware of the weight of what tweets mean, and that's unfortunate. They don't see the gravity of the situation. If it is a joke, it is assuming really dark and dangerous things about human nature and how girls should expect to be treated," said Dana Edell, executive director of SPARK, an organization that focuses on the sexualization of women in the media. The group was behind a recent petition to stop LEGO from creating products specifically marketed to girls.

The debate around Brown's inclusion in Sunday's Grammy Awards performances was already heating up before the tweets from Sarah and at least a dozen others entered the fray. But they succeeded in catalyzing the controversy into a discussion of how society views domestic abuse and the role of mass media in shaping those perceptions.

"Whether those tweets were intended snarkily or not, the fact that you have so many that are on the surface so deeply disturbing reveals how little young women understand about the actual physical dangers in dating violence and abusive relationships," said Jennifer Pozner, director of the media analysis group, Women in Media & News.

"They're not talking about sexual fantasies. Those young women are saying 'Chris Brown is hot, and I don't care about his history of domestic violence. I don't think that's important. What's important is he's hot, and I like him,' " she said.

Brown doesn't deserve to be blacklisted for life, Pozner said, but timing is everything. His return to the Grammys comes three years after he was arrested on the eve of the 2009 Grammys, forcing him and Rihanna to skip the show.

Brown was sentenced to five years probation, counseling and community service. He has apologized, and Rihanna has publicly stated that she wishes him no ill will.

Blame games played out in the court of public opinion for months, with both Rihanna and Brown alternately cast as the victim. Even the Grammys became a victim at one point, executive producer Ken Ehrlich told ABC News.

"I think people deserve a second chance, you know. If you'll note, he has not been on the Grammys for the past few years, and it may have taken us a while to kind of get over the fact that we were the victim of what happened," Ehrlich said in explaining the decision to invite Brown back.

"What he's done and what he's done to reclaim his career and seemingly the kind of person that he has become makes him -- I don't even want to use the word eligible -- but you know, it's time," he said.

Now and just after the 2009 incident, some of Brown's female fans said they'd give him a pass because he was good-looking and talented, syndicated radio host Ralphie Aversa said.

"There's always going to be a double standard as we place celebrities on a pedestal," he said. "We'd see that same kind of reaction that we're seeing now from our listeners, completely ignoring the events of 2009 and saying 'I'd still want to be with Chris.' "

With the 2011 release of "Fame," the album that won him a Grammy for best R&B album on Sunday, Brown appeared to be moving past the controversy, Aversa said.

He'd apologized for his actions, paid his debt to society and even Rihanna appeared to have forgiven him. That's why Aversa watched with shock as the controversy reignited on his Facebook and Twitter feeds on Sunday night.

"He deserves a second chance. Regardless of what you think of him as a person, the music he has released since then has been second to none. He's really stepped up his game and if not for the Rihanna incident, we'd probably put him in the conversation with R&B greats," he said.

"Obviously, the Grammys recognized that by inviting him back."

Others, however, didn't feel Brown had done enough time. Those who took a dim view of his return felt it sent the message to men that it's OK to beat up your girlfriend and expect to be forgiven. They said they message to women was that dating violence is a relationship norm, something that society condones and forgives, Pozner said.

"For the Grammys to give Chris Brown two performances on the music industry's biggest night of the year is like saying, 'have one performance for each year you weren't on the Grammy stage because you beat your girlfriend,' " she said.

"It's not only part and parcel of the dismissive way that the industry treats its female artists, but also indicative of its willingness to prioritize violent male performers over other performers that are equally commercially viable."

It's unfortunate but not surprising, she said, especially given the executive producer's comments that the Grammys suffered from a loss of performers because of the beating. Rightly or wrongly so, the media is the message and the messenger, she said.

"Rihanna and Chris Brown are young people, and young people in the music industry have an incredible influence over youth culture," Pozner said. "Dating violence is already something that is virtually invisible to those who are not experiencing it, so whenever a very clear cut case of dating violence comes to the surface in the music industry, the perpetrator and victims become a symbol of that issue."

At least, that's the message that viewers and fans get, she said, translating into shocking tweets from women saying that they'd let Brown beat them.

"Dating violence, just like domestic violence, is deeply misunderstood and not taken even remotely seriously even thought it happens in epidemic numbers" Pozner said. "That's part of the reason why it is so dangerous for the Grammys to embrace and showcase Chris Brown after his violence against Rihanna."

Like it or not, the unfolding controversy has become a metaphor for how we as a culture view domestic violence, Edell said.

"Because we've created a world where we dress women like sex objects and market to them as sex objects, they grow up thinking they are sex objects that can be hit and thrown around," she said. "In a world where we're surrounded by marketing images almost 24 hours a day, we're pushing out more sexualized images of girlhood and being a woman and that's contributing to a culture of violence in little girls."

Meanwhile, Sarah and the others are still defending themselves from comments that might be considered hateful or degrading in any other context.

Among the name-calling and death threats, some are coming to their side.

"I disagree w/ what you said about Chris Brown, but it sucks that people are being such a******* to you," Tae Phoenix tweeted at Sarah Tuesday night. "Keep your head up!"