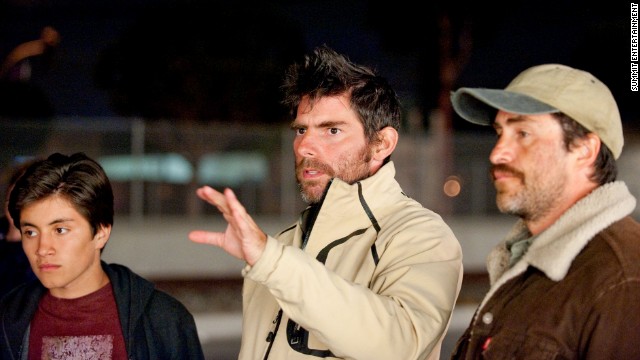 (CNN) -- As I ride to the Oscars on my compañero Demián Bichir's coattails this Sunday, I will be mindful of some ironies.

Will the canapés passed around to the guests arriving in black tie and gowns be served by documented workers? Hard to say.

Even "respectable" concerns like Wal-mart have used middlemen to enable them to benefit from the lower wages they can pay "illegals" (to use a favorite Republican term).

Doubtless the ingredients themselves will have been through the hands of undocumented workers -- a fact we should keep in mind when we enjoy the bountiful and cheap harvest of the nation's producers.

Demián's nomination came for his portrayal of Carlos Galindo, an undocumented worker in our film "A Better Life." But he will not, needless to say, be wearing the work boots and shearling of an immigrant gardener. He will be in the uniform of the Hollywood elite at play and, some would say, in the act of self-congratulation.

Yet, I think there is something to be congratulated in this case. While I believe the Academy gave Demián a tap on the shoulder for all the right reasons -- mainly the strength of his performance -- there is an effect beyond Hollywood of which it may not be aware.

I saw it on the front pages of Spanish language newspapers around the country, which greeted Demián's nomination as a stirring validation of the humanity of the character he played and a source of great pride. And I heard it at the screening we did for the National Day Laborers Organizing Network, where 200 hard-working people, some who had traveled at the risk of being apprehended and deported, felt that they had been treated as first-class human beings rather than parasites.

The battle over immigration reform is fought with numbers, but the ground of the battle is an emotional landscape. Over the past few months we've seen the Republican candidates use undocumented immigrants as a rhetorical punching bag, secure in the knowledge that they can't fight back.

Why? Because an undocumented immigrant is afraid to draw attention to himself. Although they are, on the whole, tremendously industrious, family-oriented, God-fearing and deeply invested in this country through familial ties, they are living on a razor's edge. The edge is, if anything, made sharper by draconian and politically self-serving laws like Alabama's HB56 and its cousins in Arizona and Georgia.

Leaving aside the fact that the law has been disastrous for the state's economy and reputation -- fruits are rotting unpicked in the fields and the bad old days of segregation have been evoked -- it's just plain indecent. This, more than any facts or figures, will be where the law runs aground, when people understand the story of the undocumented immigrant in the United States.

The Pilgrims did not have papers. They arrived and made their way. And my grandparents came from Mexico, Germany and Czechoslovakia to make a better life for my family.

And when the camera turns to Demián, nominated for an Oscar up there with Brad Pitt and George Clooney, hundreds of millions of people worldwide will see a foreign-born worker making his way, through all the barriers of language and racial preference, in this amazing country.

The opinions expressed in this commentary are solely those of Chris Weitz.