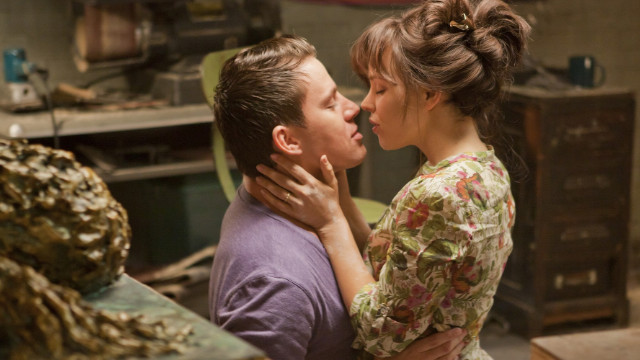 Channing Tatum and Rachel McAdams star in a new tearjerker, "The Vow," which is based on true events.

(CNN) -- As Paige emerges from her comatose state, she mistakes the man at her bedside, her husband Leo, for a doctor.

You realize Paige has no memory of her life with Leo -- not their marriage, their love, nor their "Vow." And that's when it happens:

Tears ready behind your eyes. Before you know it, they've rolled down your cheeks and into your popcorn.

From "Love Story" and "The Notebook" to "The Vow," which opens in theaters today, Hollywood has long sought to cash in at the box office by tugging at viewers' heartstrings.

And while some moviegoers will buy tickets to a poignant love story looking for a sort of cathartic experience, Mary Beth Oliver, a professor of media studies at Penn State University, says it's unclear if movies actually serve such a purpose.

People certainly go to the movie theater with the intention of having a good cry and letting out certain emotions, Oliver said. However, she added, there are many reasons why films make people feel better, and the movie itself might not even be one of them.

"A lot of it has to do with who you're watching the movie with," Oliver said. "If I go to the movies with my best friend, and we cry all over each other and comfort one another, I end up feeling better. But really, it was ... the support my friend gave me that made me feel better. But I attribute it to the movie."

While movies might not actually make viewers feel better, they do "allow us to experience strong emotions in safe places," said John Sherry, an associate professor specializing in mass media effects at Michigan State University.

And there's a reason why movies make for such great dates.

"The way that we react to the emotional experiences in movies gives insight to how we might handle those emotional moments in real life," he added.

When two people are just getting to know one another, and impress one another, they might think twice before expressing such emotions, said Richard J. Harris, a professor of psychology at Kansas State University.

Harris, who has studied couples' experiences with watching romantic movies, said more women than men give themselves permission to respond to sad or romantic movies. But holding back emotions can actually affect a viewers' overall experience, he said.

It's like a fan allowing themselves to get caught up in the competitiveness of a sporting event.

"When people watch a sporting event, and they're all rooting for the same team, they'll yell, cheer, hug each other," Harris said. "That stuff enhances the enjoyment (of the experience)."

Even "The Vow's" stars, Rachel McAdams and Channing Tatum, said they've had movie-induced sob sessions in the past.

Tatum told the Los Angeles Times that "Finding Neverland" and animal movies, like "War Horse," always seem to move him to tears while McAdams admitted to crying so loudly during "The Way We Were," that she woke her sister up out of a sound sleep.