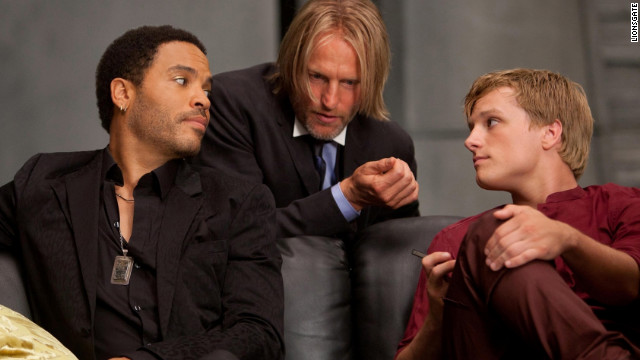 Lenny Kravitz, left, stars in "The Hunger Games" as Cinna, with Woody Harrelson as Haymitch and Josh Hutcherson as Peeta.

(Rolling Stone) -- Lenny Kravitz chose a life of rock and soul a long time ago and until recently was never tempted by the movies.

"In the last 22 years, while I was making my music, I was offered a lot of films," Kravitz tells Rolling Stone. "I just didn't find the roles very interesting -- a lot of clichéd type of stuff and really obvious things. I didn't want to make films because I can. There's no point in that."

That changed in a big way with his first feature-film role in the 2009 drama "Precious," and now with a key role in next month's "The Hunger Games." Based on the hugely popular novel of the same name, the new film is set in post-apocalyptic North America, where teenage gladiators are chosen to battle to the death in annual televised games. Kravitz plays Cinna, stylist and confidant to the rebellious Katniss Everdeen (played by Jennifer Lawrence), the central figure in the book and movie.

"I always figured it would come back into my life," Kravitz says of acting. "I was an actor when I was a kid. When I realized music was my thing, I just gave it up. I put blinders on, just focused on music. It's come back now and I really am enjoying it."

Kravitz took the role after meeting with director Gary Ross ("Pleasantville") and reading the first book of the best-selling trilogy by Suzanne Collins. "I thought it was really good storytelling," Kravitz says. "I'm very much into stories. The character was interesting. I like Gary's previous work. And I said, Yeah, let's go."

In "The Hunger Games," his character creates a series of striking outfits for the young warrior, which isn't exactly a stretch for the stylish rocker. "He's very streamlined, he's very quiet," Kravitz says of Cinna. "He knows what he's doing. He's confident. He's got a big heart. I just liked the way he moved -- very smooth."

As a musician, Kravitz is used to being in total control of his work -- writing, performing and producing -- and that control reflects on him as an artist. "It's about me, as it should be," he says. "But in this case, it's got nothing to do with me. It's about a director's vision, a character, and I really like that."

The film opens on March 23. Up next for Kravitz is "Negrophilia," the funk album he interrupted to record last year's "Black and White America." Music remains his central concern, but he now also considers himself a working actor.

"I'm just waiting for the right roles to come in," he says. "Thank god I have a day job."