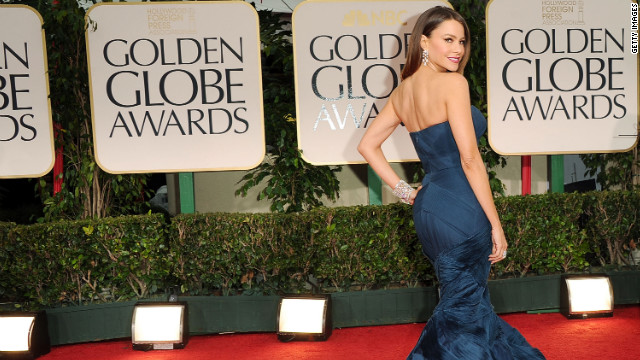 Sofia Vergara arrives at the Golden Globe Awards on January 15.

(CNN) -- Most Oscar-bound celebrities spend the better part of that Sunday prepping themselves for the cameras -- and the fashion critics.

They get their hair, makeup and nails done, shimmy into the proper shapewear, adorn themselves with millions of dollars worth of jewelry, slip on a pair of stilettos, and zip up their one-of-a-kind gowns.

Yet, within seconds after they step onto the red carpet, we've already decided whether or not their primping paid off.

While it takes a mere moment to wind up on the worst-dressed list, it takes a stunning comeback, or two, before redemption is bestowed. And with everything that goes into achieving a "best-dressed"-worthy look, attendees are lucky they have an entire season to perfect their red carpet style.

"Each awards show has a different personality style-wise, and people have learned to dress accordingly," said Sarah Bernard, host of "The Thread" on Yahoo!'s Shine. The Academy Awards calls for classic, formal attire, she said, but celebrities can have a little more fun with the Golden Globes, the Screen Actors Guild Awards and the Grammy Awards, which allow for edgier ensembles.

But even a classic look isn't a surefire way to keep the scrutiny at bay. See, not taking a fashion risk is a risk in itself, Bernard said, adding, "It's important to mix it up."

That's exactly what "Bridesmaids'" actress Rose Byrne did when she showed up at the SAG Awards wearing an Elie Saab jumpsuit.

"It's so great to see anybody step out of the box and do something not so traditional," said stylist to the stars Nicole Chavez, whose clients include Rachel Bilson, Scarlett Johansson and Kristen Bell. "(Celebrities) don't take as many risks on the carpet as they should. ... Because people are so quick to criticize, they're more careful about their selections."

But red carpet couture isn't about setting a trend. It's about wearing something flattering in a style you love, said the new mom, who hasn't outfitted anyone this awards season.

One red-carpet regular who has stunned this season, wearing gowns that complement her shape, is "The Help's" Octavia Spencer, said Yahoo!'s Bernard.

And with so many nominations for best actress in a supporting role -- she won the award at the Globes and the SAG Awards, among other shows -- Spencer is being watched closely.

The actress has developed a relationship with Tadashi Shoji, the Japanese designer behind the lavender gown she wore to the Globes, and the silver number she donned for the SAG Awards.

"My mom always taught us to dance with the one that brung ya, and (Shoji) gave me a lot of clothes while we were on ("The Help") publicity tour," Spencer told E!

It's common for a celebrity to have a relationship with certain designers, Bernard said, referencing Charlize Theron, who wore a standout pale pink Dior gown to the Globes. (Theron is a spokesperson for Dior.)

Bernard anticipates that Spencer will continue her "classy and fashion forward" streak at the Academy Awards on Sunday, possibly with another Shoji creation.

"The red carpet is a very intense situation, and you want to be comfortable out there," Chavez said. "If you're confident and comfortable, it reads. It you're uncomfortable, no matter how beautiful your dress is, it can end up not working."

The potential for discomfort is one reason footwear expert Meghan Cleary says shoes are the most important part of any red carpet look.

"(Shoes) have the biggest effect on how you feel," said Cleary, the author of "Shoe Are You?" "They have an actual physiological effect on you -- the way you walk and carry yourself, and the way you stand."

Even for the Academy Awards, which calls for mostly floor-length gowns, "shoes are still in the game," she said.

Cleary expects most shoes on Oscar night to be delicate stiletto sandals, with jewels and metallic detail. "A lot of times the shoe becomes part of the jewelry."

And with so much focus on the dress, shoes become a way for celebrities to experiment, and maybe take a fashion risk.

Cleary says pairing a purple metallic stiletto with a red dress would create a fashion-forward and edgy formal look. "I say go for it. Kudos to you," she said. "But will you be excoriated on the red carpet for that? I don't know."

As a celebrity stylist, Chavez says she gravitates toward the rich colors during awards season, because the hues tend to show off detail better than pastels or black numbers. Plus, she said, publications are more likely to run photos of stars wearing bright-colored gowns -- like the scarlet Valentino that Michelle Williams wore to the SAG Awards.

The saturated, rich jewel tones are all over the red carpet this season, like the jade green Oscar de la Renta dress Emily Blunt wore to the SAG Awards, or the fuchsia Marchesa gown Sofia Vergara donned the same night.

On the flip side, nude-colored gowns have also been all the rage this awards season -- Jessica Biel, Kristen Wiig and Piper Perabo have all tried out the trend, somewhat unsuccessfully. (Each celebrity ended up on at least one media outlet's worst-dressed list, in addition to getting burned on E!'s "Fashion Police.")

A nude gown is "so incredibly stunning in real life, yet, just doesn't translate on TV or in photos," Chavez said.

Just because a gown looks good in person, she added, it doesn't mean it will translate for the cameras, which is why Chavez always photographs her clients in a gown before a final decision is made.

Chavez said she expects to see a mix of vibrant, nude and sherbet colors take over at the Academy Awards. But she's excited to see what some of the newcomers will pull out on the carpet.

"There are a bunch of ... cool, young, beautiful girls experimenting with fashion," she said, giving a nod to Rooney Mara, who has been playing with cutouts and black and white.

In the end, any celebrity can end up on a list of best- or worst-dressed stars. But the fashionistas who push the envelope are the ones we'll be talking about long after awards season.