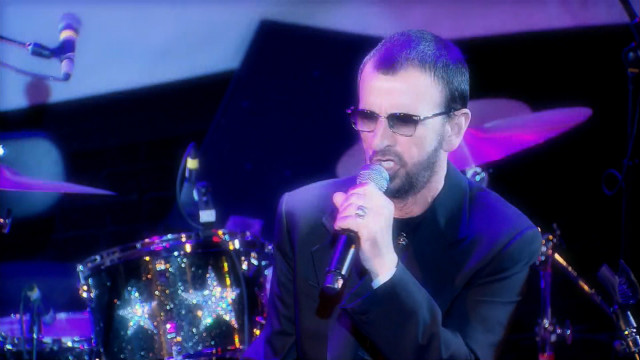 Ringo Starr: 'I have a very good life'

It's his sack lunch, and he's packed it himself. He's also driven himself to the hotel and arrived alone -- no entourage, no bodyguard, no assistant, no fuss.

It's fitting that CNN's interview with the iconic music star is taking place at an iconic hotel, which is like a second home to the former Beatle. This is where the Fab Four stayed when they first came to Hollywood in 1964, no doubt trailed by dozens of screaming girls and photographers as they ushered in the British Invasion.

Looking at least a decade younger than his 71 years, Starr settles into the corner of a couch and talks about celebrity then vs. celebrity now -- this from the perspective of a man who has been famous for nearly 50 years.

"I feel like it's harder now for the celebrities," he tells CNN Entertainment Correspondent Kareen Wynter. "There was no one bigger than us, and we were put upon. Then, Paul and I would go on holiday, or John and I would go on holidays, and we'd be fine. Now you can't go anywhere. The celebrity of today is so documented that I think it's a lot harder now. We had it easy. We thought it was hard, but not compared to today."

In 2012, his star hasn't waned. It has just taken on a comfortable glow. As one of two surviving Beatles, people are treating him like a living treasure -- and these days, he and Paul McCartney seem to be treasuring each other. Starr remains touched that Macca showed up at his 70th birthday party at Radio City Music Hall.

"I had no idea he was coming," he recalls. "He jumped up to do the Beatle track, 'Birthday.' Nobody told me that he snuck in, and that he rehearsed with the band."

In recent weeks, Starr has been busy promoting "Ringo 2012," his 17th solo album. He produced it himself and recorded it in Los Angeles with a number of his buddies, including producers Don Was and Dave Stewart and Eagles guitarist Joe Walsh, who also happens to be his brother-in-law.

Below is a portion of CNN's conversation with Starr about his new CD, his relationship with McCartney and whether there will ever be a Beatles reunion.

CNN's Kareen Wynter: What was your inspiration behind the new album?

CNN: What drives you after having such a long career?

Starr: You get up in the morning and you start the day. I like to get up early, and I don't like to get up and get right at it. I like to sort of work my way into the day, and then whatever comes along, I say 'yes' or 'no' to.

CNN: Does anything shock you anymore?

Starr: Nothing shocks me, no -- not on TV. It is how it is now. It's a pity that a lot of the reality singing shows -- somebody gets a shot for a minute, and even the winner seldom lasts more than a year. I played a lot of hours to get where I am, and it was a gradual build-up. So to go from nothing to the biggest thing in life -- you can't handle it. It was hard enough, and thank God, there were four of us to keep each other in some sort of reality. We all went mad separately, but we had each other, and we all came through gradually. So I think we were blessed that way.

CNN: You got me on, "We all went mad separately."

Starr: Well, we did, because we all had our moment, and then John or one of them would look at me and say, "Excuse me?!" and pull you back, you know?

CNN: Do you miss those days? Four instead of two?

Starr: Well, of course I miss them. We were great friends, and we played a lot together, and we went through the madness together. There were only four people who understood what we went through, and it's down to two now. There is nothing I can do to change that. I would like to be able to change it, but I don't have that power.

CNN: Can you put the rumors to rest: Will there be a Beatles reunion at the 2012 Olympics in London?

Starr: How can there be? Oh no, I'll be here. I'm already booked in America.

CNN: Paul said you may want to do it.

Starr: Paul can do it.

CNN: But it's not the same without you.

Starr: Well, he is doing quite well without me. He is doing OK.

CNN: You're part of the act.

Starr: Well, we had a great time at my birthday. He surprised me in New York, and he jumped up to do the Beatle track "Birthday," and I was not going to miss that so I just ran to the drum kit, and that was fun. We have played a couple of times together. We did the David Lynch show a couple of years ago, so we have done that. But I will not be at the Olympics. I have to be very definite about that because they will say, "Oh, is he coming? Isn't he coming?" No, I am not going -- but to all the athletes, "Peace and Love!"

CNN: What about in the future?

Starr: Well, the door is open that Paul and I might play together, but it is not like a reunion. It is not going to be the Beatles, you know? They have those crazy ideas that maybe we could use their children. It is never going to happen.

Starr: It's good. After all of the time, everybody has ups and downs. So we have ups and downs, but it is very up right now. I am so pleased for him and Nancy. We love Nancy.

CNN: Their wedding was beautiful. What was it like seeing them walk through those chapel doors?

Starr: Great. It was great, and he seems really happy and that is good. As I said, we love Nancy, so I think it's a great moment for him.

CNN: How would you describe Nancy?

Starr: Very down to earth. Very easy. She mixes right in and she loves music, so it can't be bad. And, you know, she is a very beautiful woman. Regal is a great word. Regal Nancy.

CNN: The Beatles came up during a tumultuous time. Do you see any parallels between that period and what's happening today?

Starr: As we all know, the world is going through a change, especially in Egypt and the Arab countries. America had to go through its change. England has been through several changes. France has been through a really big change. So it is just part of life, and God bless them. And it is great to see there is a lot of this (gives peace sign) going on in the world, and that is what it's about. We would love to be able to say, "OK, it's a peace and love takeover." But usually whoever is in power, as it seems, is injuring a lot of its own people.

CNN: You really represent your "Peace and Love" theme. What do you hear from young people when they approach you?

Starr: A lot of young people love "Peace and Love." I mean, they would like it to be that way. That is the way we all thought. But a lot of work goes into it. I just keep it going because it is a second in my life to think, "Peace and Love." How great is that? So if you put all of those seconds together, then soon you have got some time and it will make a change.

CNN: What's next for you?

Starr: Well, I think you tackle that as it comes along. I am making records, I am going on tour, and then I am off to do whatever else I want to do. So I have a very good life.