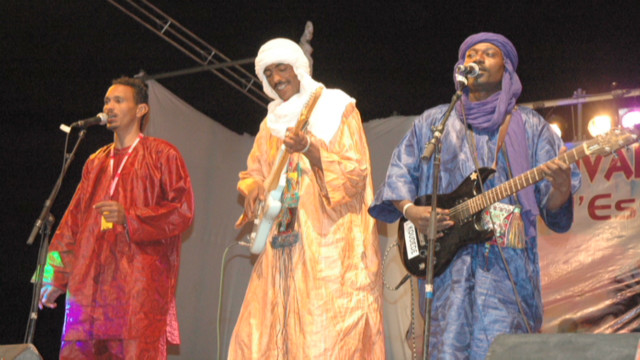 (CNN) -- You might associate music festivals with muddy fields and heaving crowds, but Mali's "Festival au Desert" is a world away from all that.

Based a few kilometers outside the historic town of Timbuktu, on the fringes of the Sahara Desert, the festival is inspired by the traditional gatherings of the region's Tuareg nomads. It's been running since 2001, bringing together musicians from the region, and beyond.

It's perhaps the only festival in the world where you can watch camel racing while listening to amped-up desert blues, where hawkers sell headscarves rather than burgers and where you can camp in a Tuareg tent among miles of empty sand dunes.

This year's festival, held in January, was in doubt after the kidnap of three tourists and the killing of another in Timbuktu, in November last year. The festival did go ahead, with an increased security presence, but security fears and travel warnings reportedly kept many tourists away.

Those who did make it to the three-day event saw performers including soulful Sudanese singer Amira Kheir, Nigerien group Koudede, and an all-star tribute to the music of legendary Malian guitarist Ali Farka Toure.

In the past, European acts including Robert Plant, Manu Chao and Damon Albarn have performed at the festival. This year, U2 singer Bono made a cameo appearance, singing onstage with local favorites -- and now international stars -- Tinariwen.

It's the authentic homegrown stars that really represent the festival. Among them is local Tuareg group Tartit, which was formed in 1995 by a group of women who met in a refugee camp. Their song "Democracy," featured on the video above, is their take on the fate of the Tuareg in modern Mali, and perfectly embodies the spirit of the festival, and the Sahara.