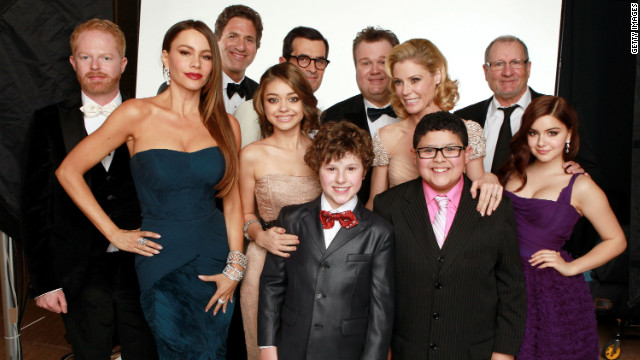 "Modern Family" was the most nominated comedy series for this year's at the Screen Actors Guild Awards.

The SAG categories include both television and film actors, and the winners are chosen by their acting peers.

Among the actors who will honor their colleagues at the ceremony in Los Angeles will be George Clooney, Tina Fey, Meryl Streep and Michelle Williams.

Leading the way in nominations this year is "The Help," with four.

"The Help," which tells the story of the treatment of maids in a Mississippi town during the civil rights era, is competing for best movie cast, while Viola Davis was nominated for best actress and Jessica Chastain and Octavia Spencer are both competing for best supporting actress.

"The Artist," a French movie about the silent film era, received three nominations including best cast. Jean Dujardin was nominated for best actor and Berenice Bejo for best supporting actress for their work in the film.

The other best movie cast competitors include "The Descendants," "Bridesmaids" and "Midnight in Paris."

Other movies with two SAG nominations include "Moneyball," a story about baseball's Billy Beane. Brad Pitt, who portrayed Beane, is nominated for best actor, while Jonah Hill is up for best supporting actor for his role as Beane's statistical wizard, Peter Brand.

Leonardo DiCaprio, who played the title role in "J. Edgar," a historical film about longtime FBI Director J. Edgar Hoover, is nominated for best actor, while Armie Hammer is up for best supporting actor for the film.

Michelle Williams, who has won critical acclaim for her portrayal as movie legend Marilyn Monroe in "My Week With Marilyn," was rewarded Wednesday with a best actress SAG nomination. Kenneth Branagh is nominated for best supporting actor for his work in the film.

Glenn Close, who plays a woman passing as a man in 19th century Ireland in "Albert Nobbs," is nominated for best actress. Janet McTeer, whose female character passes as a male house painter, earned a best supporting actress nomination.

On the prime time television side, last year's big winner, "Modern Family," was the most nominated comedy series this year with five nods.

"Modern Family" actors Ty Burrell and Eric Stonestreet will compete against each other for the best actor in a comedy show trophy, while Julie Bowen and Sofia Vergara are both nominated in the best actress category.

The other top comedy cast contenders are "30 Rock," "The Big Bang Theory," "Glee" and "The Office."

Steve Carell, now departed from "The Office," is nominated for best actor in a comedy show. "Two and a Half Men" star Jon Cryer is also nominated in that category.

Betty White is up for two individual honors, including for best actress in a comedy for "Hot in Cleveland," which she won last year, and best actress in a movie or mini-series for her work in "Hallmark Hall of Fame: The Lost Valentine." White, the darling of last year's SAG telecast, will turn 90 just days before the next awards show.

Edie Falco is nominated for a second straight year for best actress in a comedy show for "Nurse Jackie." Falco has three SAG Actor trophies, all for best drama series actor from her role in "The Sopranos."

HBO's "Boardwalk Empire" and its star, Steve Buscemi, are nominated for best TV drama series cast and best TV drama actor, respectively. They won those categories a year ago.

"Breaking Bad," "Dexter," "Game of Thrones" and "The Good Wife" are also nominated in the drama series cast competition.

The other TV drama actor nominees are Patrick J. Adams for "Suits" and Kyle Chandler for "Friday Night Lights."

The show at the Shrine Exposition Center will air on TNT and TBS. Both TNT and TBS are units of Time Warner, the parent company of CNN.