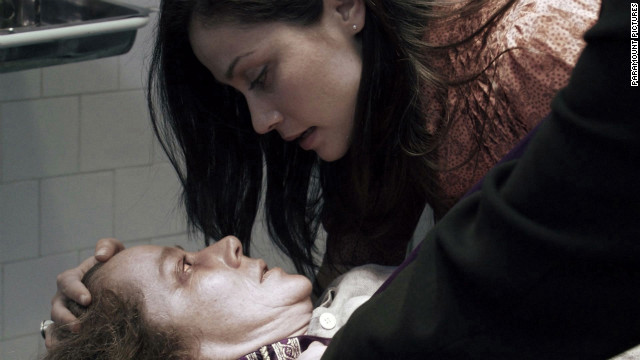 Demonic tales have made a mini-comeback in the last few years.

(EW.com) -- The 2012 box office got off to a fine start this weekend, as Paramount's "found footage" (riiiight...) horror movie "The Devil Inside," which the studio acquired for just under $1 million, earned a tremendous $34.5 million in its first three days, becoming the first breakout box office star since "The Lion King 3D."

Perhaps. But it's more likely a sign of the recent popularity of possession movies. Demonic tales have made a mini-comeback in the last few years -- starting with the success of 2005′s "The Exorcism of Emily Rose," which earned $75.1 million domestically. Since then, similar titles like 2009′s "The Haunting in Connecticut" ($55.4 million), 2010′s "The Last Exorcism" ($41 million), and 2011′s "Insidious" ($54 million) have all proven lucrative thanks to their tiny budgets. "Insidious," for example, cost just $1.5 million to make. Of course, the "Paranormal Activity" movies (the fourth of which was just announced this week) are the biggest success stories of this whole trend. A total of $8 million has been spent making the three "found footage" movies, yet they have earned $296.7 million domestically.

Paramount marketed "The Devil Inside" in much the same way the studio markets the "Paranormal" films. Commercials included ample shots of audiences screaming at the screen, and viewers were encouraged to use social media to chat up the film with the "Tweet Your Scream" campaign. Indeed, all the promotional costs -- certainly a much higher number than the budget -- helped "The Devil Inside" achieve a stellar debut, but where does it go from here? Well, it falls. Fast.

Due to their overwhelmingly young audiences, who love to rush out to the theater on opening weekend, horror movies almost always open big and fall precipitously at the box office, but "The Devil Inside," with its utterly terrible "F" CinemaScore grade (some issue has been raised as to whether the grade is actually an "F" or closer to the "C" range), will likely plummet even more quickly. Not that it really matters, though -- the horror pic is already in the black, and it may finish with as much as $70 million.

Hunt or Holmes? Which flick to pick?

A 'Mission Impossible' in the UAE

In second place, "Mission: Impossible - Ghost Protocol," another Paramount film, continued its comeback performance with $20.5 million in its fourth weekend. The action blockbuster, which became the biggest hit of the holidays, has now earned $170.2 million, and it should finish well above $200 million.

"Sherlock Holmes: A Game of Shadows" held onto third place with a $14.1 million weekend. The sequel, which initially appeared a major disappointment when compared to the original "Sherlock Holmes," has redeemed itself handily in the last few weeks. After two weekends, "Shadows" was trailing "Sherlock Holmes" by $59.7 million, but over the past two weeks, the sequel has narrowed that gap to $22.7 million, and it now has a running total of $157.4 million -- still disappointing, but not nearly the disaster it first appeared.

"The Girl With The Dragon Tattoo" finished the frame in fourth place with $11.3 million, dipping only 24 percent, the smallest drop in the Top 10. Could the edgy adaptation finally be finding its adult audience now that the warm n' fuzzy holiday season is over? After 19 days, "Dragon Tattoo" has grossed $76.8 million, and if it maintains strong holds like this, it should pass $100 million.

"Alvin and the Chipmunks: Chipwrecked" rounds out the Top 5. The kiddie threequel, which has majorly underperformed compared to expectations, dropped 42 percent to $9.5 million. It has now grossed $111.6 million total.

The next three spots were filled by holiday releases that never totally found their footing. Two of them, "War Horse" and "We Bought A Zoo," are performing respectably, though. The films earned $8.6 and $8.5 million, respectively, this weekend, and they have nearly identical totals of $56.8 million and $56.6 million. Still, there seems to be a common understanding in the blogosphere that "War Horse" (which cost $66 million) is performing admirably, while "We Bought A Zoo" (which cost $50 million) kind of fizzled, to which I say: Huh?! In eighth place is a movie which has actually fizzled -- at least domestically. "The Adventures of Tintin," Steven Spielberg's expensive motion-capture animation, dropped 42 percent this weekend to $6.6 million and $61.9 million total.

In ninth place, Focus Features' "Tinker, Tailor, Soldier, Spy," which expanded into 809 theaters this weekend, performed admirably in its wider release. The well-reviewed spy drama maintained a robust $7,129 per theater average, giving the film a $5.8 million weekend and an early $10.4 million total after five weekends.

"New Year's Eve" held onto a spot in the Top 10 for one final weekend. The ensemble romantic comedy fell 48 percent to $3.3 million. The film has earned $52 million (less than half the gross of Valentine's Day), and it likely won't make it much further.