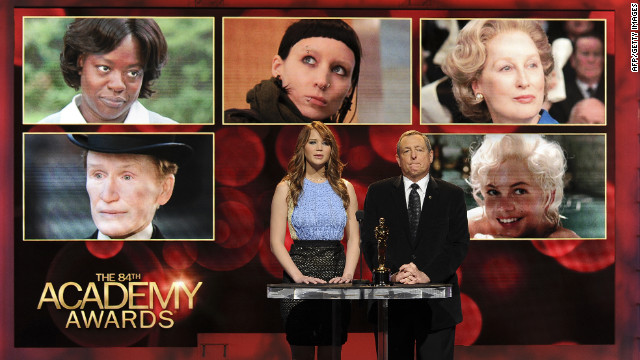 Editor's note: Jo Piazza began her career as a staff writer at the New York Daily News. She wrote the "Celebenomics" column on AOL's PopEater site, and her work has appeared in The New York Times, The Wall Street Journal, The Daily Beast, and Slate. She has also appeared as a commentator on CNN, Fox News, MSNBC and NPR. Her book, "Celebrity Inc.: How Famous People Make Money," was released in November.

(CNN) -- The Republican presidential candidates are preening and prancing throughout the Sunshine State in the hopes of winning the state's 50 precious delegates. Out in Hollywood, another kind of campaign -- one with prettier people, with better hair, but equally sharp nails -- will rage over the next three weeks for Oscar.

The comparison is apt in the vast sums of money spent, the lobbyists hired, and the number of backsides kissed in order for studios to ensure their films pick up Oscars at the end of the campaign season, capped by a red carpet of triumph and tears the evening of February 26. To that end, studios spend millions of dollars to make sure their projects take home those little gold men.

As in the presidential race, we've seen primaries leading up to the main event. Candidates were given tacit endorsements at the Golden Globes and again at Sunday evening's Screen Actors Guild Awards. After "The Help" took home a surprise win at the SAG Awards, the race for Best Picture has narrowed to that film and "The Descendants" and "The Artist," both big winners at the Globes.

For the next few weeks, until the close of Academy voting on the Sunday before the Oscars, the studios and distributors behind those three pictures -- Disney, 20th Century Fox and The Weinstein Company, respectively -- will be aggressively wooing the Academy's 6,000 members into their camps.

One of the better campaigns of the past five years was the 2010 win for the little war flick that could: "The Hurt Locker." Despite its critical acclaim and high-quality cinematography and script, it was the lowest-grossing best picture winner of all time, competing against the highest-grossing movie in recent history, "Avatar."

Besides quality, of course, what did it have going for it? One hell of an Oscar campaign. Its studio, Summit Entertainment, was flush with vampire money from the "Twilight" series. Oscar watchers, including studio executives, film journalists and fellow Oscar campaigners, told me that Summit spent between $3 million and $5 million for the campaign, which consisted mainly of hiring consultants to spin "Hurt Locker" and "Avatar" in a battle of good versus evil within the press.

"Hurt Locker" actually lost out to "Avatar" in the Globes race, and that might have been a well-timed boon for the small flick. It positioned it perfectly as the underdog going into the home stretch of the campaign.

Besides the cachet of an Oscar win, the successful campaign typically pays for itself in dividends. In the nine months after "The Hurt Locker's" Oscar win, the film sold more than $31 million worth of DVDs in the United States, 214% of its U.S. box office gross of $14.7 million.

That's what makes Oscar campaigning more than a $100 million-a-year cottage industry within the movie industry.

Persuading members of the Academy to first nominate your film and then vote for it is tremendously similar to how political operatives get candidates elected.

There is no single strategy for a successful Oscar campaign, but momentum is key. Peak too early and excitement peters out; peak too late and you've spent millions of dollars without enough time to get voters invested.

Building momentum involves racking up accolades and awards from individual guilds and film festivals before the nomination voting in January. This year Weinstein is making sure "The Artist" gathers momentum at just the right time. It took home a Golden Globe and its lead actor, Jean Dujardin, brought home a Best Actor SAG. But it has yet to peak.

How is momentum built? And why does it cost millions? After all, word of mouth is free. But an intricate web of gypsy publicists, rogue party planners, and entire full-service consultancies to generate that all-important buzz that drives a campaign can run more than $2 million.

Sure, a DVD can be mailed for less than $2. But with elaborate packaging, express mailing and hand delivery, the cost can increase to $200 each. With 6,000 Academy members, that translates to more than $1 million to get the films in front of voters.

One of the stealthier tactics of good campaigners is the third-party Oscar party, where someone who is not in the Academy hosts an event celebrating a film starring one of their good friends. The expenses for these can easily run to $2 million, which is often somehow subsidized by the studio.

Like a good show-pony politician, the cast of a film needs to be tirelessly glad-handing voters and going to every event to fluff their film. If a movie's main players aren't willing to commit to living and breathing and fighting for their film for the two months leading up to the Oscars, they can forget about taking home a statue.

Bills can run into the millions to fly the talent back and forth across the country and keep them upright and happy during the final stretch. Then there are screening costs and advertising costs. Full-page ads in trade magazines like Variety and The Hollywood Reporter can cost $25,000 each, with ad budgets ranging from $15,000 to $1 million.

Political campaign tricks are obvious. Not so for Oscar campaigns. Selecting the leader of the free world may hold far greater stakes than what to put on your Netflix queue, but they both deserve a high level of transparency. Audiences deserve to know what goes into an Oscar win before they give it credence.

The opinions in this commentary are solely those of Jo Piazza.