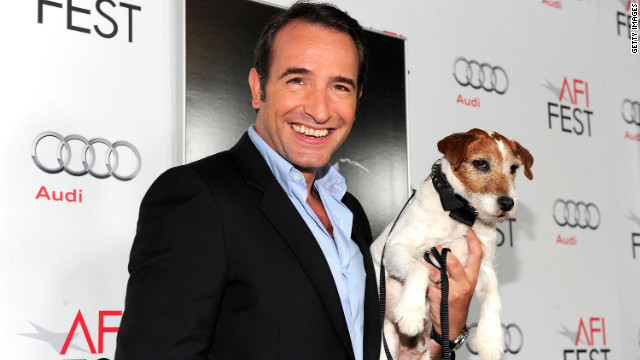 Actor Jean Dujardin was accompanied by his on-screen pet at the Golden Globes.

With charm and presence that belies his petite frame, Uggie -- the canine star of the awards season favorite, "The Artist" -- reduced a seen-it-all industry crowd to a chorus of awws.

When "The Artist" won best picture comedy or musical, and the film's cast and crew ascended the stage at the Beverly Hilton Hotel, producer Thomas Langmann took to the microphone to begin his acceptance speech. Attentions were quickly diverted, however, to a pair of hopping legs on the periphery.

Actor Jean Dujardin, who also took home a Golden Globe for best performance by an actor in a comedy or musical, accompanied his on-screen pet to the stage, leading him in one of the central tricks of the film: where Uggie gets "shot," falls down and plays dead.

The performance drew applause and cheer from the cast and the audience, and even a laugh from Miramax boss Harvey Weinstein, who'd been referred to as "The Punisher" for most of the evening.