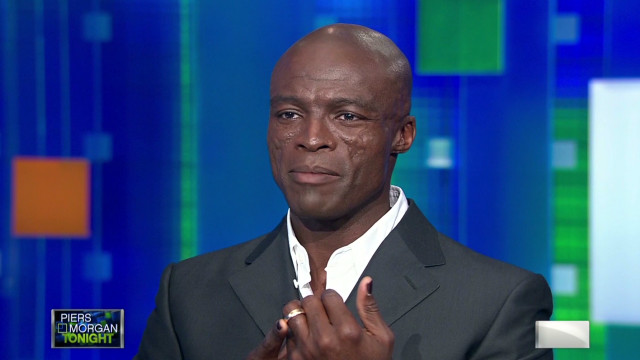 Seal on winning his wife back

(CNN) -- Seal admits to Piers Morgan that the hardest thing he ever had to do was sit his children down and tell them that their parents were parting ways.

"It doesn't really make sense," Seal said, referring to the recent bombshell news of his separation from his wife of more than six years, supermodel Heidi Klum. "The truth of the matter is all I can tell you most sincerely is that it wasn't any one particular thing."

Seal and Klum have gone public stating their wish to handle the separation with honor and dignity, and the R&B singer admitted he is surprised that the relationship took a left turn.

Seal on his 'volcanic temper'

Heidi and Seal: Why the shock?

When rumors began swirling that Klum filed for divorce as a result of Seal's "volcanic" temper, the musician told the CNN host he checked out an online article about his so-called temper problem, he said, in the interest of shielding his children from "outside negativity." (He and Klum lovingly refer to their four offspring as "the United Nations of Children.")

The article included a video clip of what appeared to be Seal shouting.

"People want to sensationalize things," Seal said. "That's just the nature of the business." But Seal explained that "in actual fact, I don't even think I was shouting, but I raised my voice at a reporter. It was an incident where we were walking through an airport in Los Angeles, and I had my son and my daughter in either hand, and we were swarmed by 15 to 20 paparazzi in the airport, you know? And one of them hit my son in the head with a camera lens. And I obviously said something to the reporter, you know, and then of course I become the angry stereotype, you know. I become the rock star, the angry rock star with a hot temper."

Does Seal believe the relationship can be salvaged?

"Never say never," Seal told the CNN host. "I can't speak for my wife, and I'm not going to sit here and BS you and tell you we haven't had problems. Of course we've had problems -- otherwise why are we splitting up?"

Seal was adamant, however, when he told Morgan, "My love for her has not waned one iota."

The musician said that Klum made him "a better man," describing his wife as "the most fantastic woman I've ever met, and I still believe that now, as I did eight years ago, the day I met her."

That's not to say that Seal's outlook is unduly optimistic.

"We are going to separate," he said. "We may become legally separated. Who knows if it makes either of us happy? We may even become divorced. I can't look into the future, but I can say that we will always be the greatest of friends."