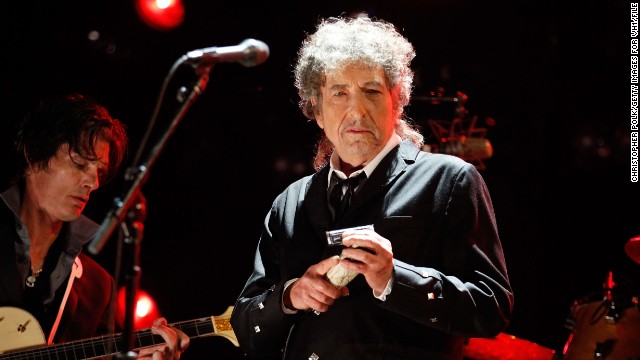 (EW.com) -- Bob Dylan never wrote any songs about body glitter or throwing up in the closet. So one may wonder why Ke$ha appears on Amnesty International's new benefit disc "Chimes of Freedom," a 76-track collection of Dylan covers that also features Adele (''Make You Feel My Love''), Maroon 5 (''I Shall Be Released''), and yes, Miley Cyrus (''You're Gonna Make Me Lonesome When You Go''), among others.

But on her stripped-down ''Don't Think Twice, It's All Right,'' Ke$ha gets the song's heartbreak right; you can actually hear her sobbing between verses. If there's ever a reason to believe the girl's capable of deeper feelings than ''vaguely hungover,'' this is it.

To quote from the 1964 Dylan song that gives this comp its name, Bob has always been a champion of ''the countless confused, accused, misused, strung-out ones, an' worse.'' So it makes sense that the best covers here come from the misfits (Ke$ha), the punks (check out Rise Against's raging ''Ballad of Hollis Brown''), the outsiders (Mexican pop star Ximena Sariñana's excellent ''I Want You''), and the radicals (''With God on Our Side'' finds Somali-born Toronto rapper K'naan challenging American hawkishness as only a Canadian can).

The savviest musicians here flip Dylan's messages for their own aims, just as Dylan reappropriated protest songs by civil rights heroes. Celtic-rock stalwarts Flogging Molly take on ''The Times They Are A-Changin' '' -- which itself was inspired by Irish drinking songs -- and reclaim it for Dublin. Sinéad O'Connor recasts 1981's born-again ''Property of Jesus'' as a fiery church-reform anthem. And Carly Simon smartly plays ''Just Like a Woman'' as a feminist ballad. When she sings ''You break just like a little girl,'' it sounds like she's telling Dylan to man up.

There's just one problem. That leaves 60-something more songs, and an unholy amount of strummy-strummy-strum (though you can buy digital tracks individually, and an edited two-disc version is available for $14.95 at Starbucks). Diana Krall, Billy Bragg, Pete Townshend, and other major talents opt for straight, folky readings of songs that beg for a reggaeton arrangement or a brostep remix -- anything to update the same classics we've heard a bajillion times before. True, Ziggy Marley and Michael Franti bring some freshness, but even they can't resist those bland open-mic-at-the-fair-trade-coffee-shop guitars. Where's the prankster spirit that got Dylan booed at Newport? Apologies to Brett Dennen and Dierks Bentley, whose respective rootsy spins on ''You Ain't Goin' Nowhere'' and ''Señor'' are lovely, but after listening to your trillionth fingerpicking solo, it's easy to think, ''Dylan went electric for this?''

By contrast, Kronos Quartet and Philip Glass sound almost revolutionary on their gorgeous, avant-classical ''Don't Think Twice, It's All Right,'' the only song that appears twice here. It takes major innovation (and some musical-saw interludes) to create a wholly original take on an artist who reinvents his own songs every time he plays live. And maybe that's why covering Dylan seems so hard: At a time when every subway busker thinks he's the Bard, the only man who's really the ''new Bob Dylan'' is Dylan himself. B-