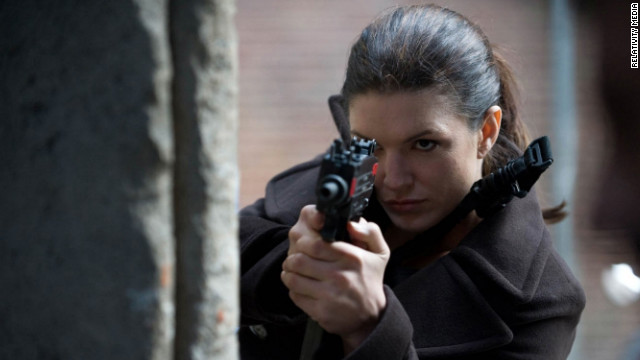 Editor's note: Mark Rabinowitz is a co-founder of Indiewire and more of his writing on film can be found at his blog The Rabbi Report.

(CNN) -- There's a term applied to the sort of earnest films with an international cast from the U.S. (Gina Carano, Michael Douglas) Scotland (Ewan McGregor), Spain (Antonio Banderas), France (Mathieu Kassovitz) as well as the Irish/German Michael Fassbender that traipses around Europe like some sort of multi-million dollar travel brochure: Euro-pudding.

"Haywire" is most definitely not in that category.

While it does boast a multinational cast and is set in several international locales (with sequences in upstate New York, Barcelona, Dublin and New Mexico), "Haywire" doesn't feel like a pudding. Instead, it is a nonstop adrenaline rush of action, intrigue and suspense, full of mercenaries, double crosses, one really cool dad (an under-used Bill Paxton) and a superstar in the making.

Mallory Kane (Carano) is a former Marine, turned mercenary. A woman in a man's world who is easily as tough or tougher than the men she works with.

She's the star of the show, but as many people in her line of work likely do, she is beginning to feel a bit of burnout. She wants out of the game, but this is a racket that people tend not to walk away from. Considering how much money is involved (and the fact that she knows where the bodies are buried), her boss Kenneth (Ewan McGregor) is not exactly itching to let her go.

Her last job, told in flashbacks, went south. She worked with a kid named Scott (a funny and game Michael Angarano) whose SUV Mallory "borrows." She was double-crossed and framed and is now literally running for her life while trying to clear her name.

Carano is a fantastic newcomer. She overflows with screen presence and kicks a** like nobody's business. A prominent mixed martial arts fighter, Carano uses all of her Muay Thai training in her many fight scenes. She received Special Ops training for the film to round out her character's skillset.

Once you know what's going on, "Haywire" isn't particularly hard to follow. Though it is occasionally formulaic and the ending is a bit too neatly tied up for my taste. But that's OK, the ride is the important part. There are enough twists and turns to keep you guessing for a while and Carano is just so much fun to watch.

Of course she's an absolute stunner (for what it's worth, she was #16 on Maxim's "Hot List" in 2009) but she's far more than a pretty face. She's got a bag full of charisma and her physical acting (beyond the fighting) is excellent.

The only measurable weak link is in Carano's acting. Sure, she's photogenic, knows how to look natural on camera (not an easy task) and can more than hold her own in the fisticuffs, but she's not (yet) all that adept with her lines.

She wasn't awful by any means, but there were a couple of cringe-inducing moments especially early in the film with Channing Tatum (himself, not exactly the quintessential thespian) and when trying to spit out a mouthful of military jargon, like Julia Roberts in "Notting Hill." ("Turn over four TRS's and tell them we need radar feedback before the KFT's return at 19:00. Then inform the Pentagon we need Black Star cover from 10:00 through 12: 15."). In all fairness, no one except Tommy Lee Jones or Gene Hackman can say that stuff and sound ... human.

This is but a minor blip. At a brisk 93 minutes, "Haywire" runs along at breakneck speed, pausing only for brief scenes required to set up the next action sequence. Soderbergh confirms his stature as one of the most versatile directors working today, equally capable of handling this international espionage thriller as he is comedic heist films ("Oceans" series), Epic biopics ("Che") and intimate indies ("The Girlfriend Experience"). I only hope his oft-rumored retirement is really just a sabbatical and that someone's got Carano and screenwriter Lem Dobbs ("The Limey") locked up for sequels. I want to see more of Mallory Kane.

Haywire is rated R (Restricted. Children Under 17 require accompanying parent or adult guardian.) It's got lots of hand-to-hand and gun violence and a little suggested hanky panky.