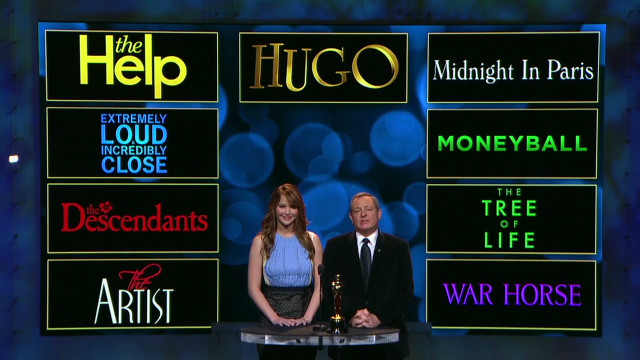 And the Oscar nominees are...

Brad Pitt and George Clooney will face off in the best actor category at the Oscars next month, with Pitt's "Moneyball" contending for six awards and Clooney's "The Descendants" up for five. Both films were also nominated for best picture.

Other best picture nominees include Steven Spielberg's "War Horse," nominated in six categories; Woody Allen's "Midnight in Paris," up for four Oscars; "The Help," with four nominations; "The Tree of Life" with three; and "Extremely Loud & Incredibly Close," competing in two categories.

Meryl Streep's performance as former British Prime Minister Margaret Thatcher in "The Iron Lady" earned her a best actress nomination, as did Michelle Williams' role as movie legend Marilyn Monroe in "My Week With Marilyn."

Both women won Golden Globe acting honors last week, but Streep was competing in the drama film category, while Williams was in the comedy competition.

"I am honored to be in company with such beautiful artists, and touched deeply by my fellow actors for their generosity in giving me this acknowledgment," Streep said Tuesday.

Branagh on 'My Week with Marilyn'

The academy also nominated Viola Davis for best actress for her portrayal of a civil rights-era maid in "The Help" as well as Glenn Close, who played a woman passing as a 19th-century man in "Albert Nobbs," and Rooney Mara for her title role in "The Girl With the Dragon Tattoo."

Competing against Pitt and Clooney for best actor are "The Artist" star Jean Dujardin, Demián Bichir in "A Better Life" and Gary Oldman for "Tinker Tailor Soldier Spy."

"I'm overjoyed and filled with happiness," Bejo said. "I can't believe that a year ago I was learning how to tap dance and today I am nominated for an Academy Award."

"Every picture is a challenge, and this one -- where I was working with 3D, HD and Sacha Baron Cohen for the first time -- was no exception," Scorcese said.

Along with the best actor and supporting actress nominations, "The Artist" earned a best director and original screenplay bids for Michel Hazanavicius.

"Filming 'The Artist' in Los Angeles was a dream come true, and to receive this recognition today is far beyond what I ever imagined," Hazanavicius said.

His movie competes with "Hugo" for best art direction, cinematography, costume design, film editing and original music score. Unlike "Hugo," "The Artist" was not nominated for best sound editing, sound mixing and visual effects, which is not surprising considering it is a black-and-white silent movie. It won the Golden Globe for best comedy or musical last week.

Allen is up for best director and original screenplay Oscars for his film about a time-traveling American writer, "Midnight in Paris." He won the Golden Globe for best screenplay. His best picture contender is also nominated for best art direction.

Other best director contenders include Alexander Payne for "The Descendants," which carried home the best drama film at the Golden Globes, and Terrence Malick for "The Tree of Life."

The animated feature film category is proof that Golden Globe wins don't make you an automatic Oscar nominee. Spielberg's "The Adventures of Tintin" won at the Globes last week, but it was not among the five films nominated for an Academy Award.

The Oscar nominees in that category include "A Cat in Paris," "Chico & Rita," "Kung Fu Panda 2," "Puss in Boots" and "Rango." Only the latter two were nominated for Golden Globes.

The 84th annual Academy Awards will be televised live from Hollywood's Kodak Theatre on February 26.