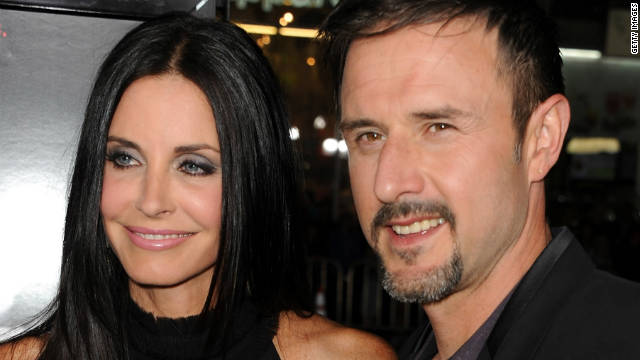 (EW.com) -- They've been separated for about a year-and-a-half , but Courteney Cox and David Arquette are proving once again they have no hard feelings.

EW confirms a report that Arquette is set to guest star on "Cougar Town's" season 3 finale as a concierge who crosses paths with Jules (Cox) and [spoiler alert] her bridal party.

As you might now, this season, (FINALLY) starting February 14, will see Cox's character getting engaged to Grayson (which, creator Bill Lawrence recently joked with EW, "pretty much makes it the worst [show] title in the history of television").

All of this, of course, comes at the end of a season riddled with as much fun as there is wine in the veins of the cul-de-sac crew. But what exactly is in store? In addition to what EW scooped up out at TCA, here's some more intel for you to drink up (some of which loyal readers of EW's Spoiler Room are already privy to):

- Travis (Dan Byrd) spends seven episodes in a helmet, following an accident that leaves him with a skull fracture. "Our loyal fans and the writers and staff of the show hated his hair last year, and I was trying to think of a suitable punishment," jokes creator Bill Lawrence. "He wears a big white foam helmet. But I think not only is it funny, but in a positive way, it teaches this young actor not to have ridiculous hair that people complain about." Adds Cox: "I don't know that his hair looks much better now."

- Laurie (Busy Philipps), who will later this season also get a new love interest, opens a cake business after she and Jules part ways. "That's funny in the way that unfolds," Lawrence teases.

- Bobby (Brian Van Holt) finds a girlfriend in "Scrubs'" Sarah Chalke. "Besides the fact that I think she's very talented and the episodes are funny, it was fun for Courteney and me and the others to have her around her because she's a friend," says Lawrence.

- Speaking of "Scrubs," Zach Braff will also appear, but, says Lawrence, "I can only smile because one of the agreements I always make with friends that do favors for me [is that] when they aren't doing big guest star parts, I [won't] use them to promote the show. But I am allowed to say that it is one little scene this year that will certainly melt the brain of different 'Scrubs' fans."

- Jules and Grayson go to marriage counseling, a storyline, in part, inspired by Cox, according to Lawrence. "When it comes to shrinks, one of the funniest things, between Courtney and me, is that she's a believer in counseling and therapy and stuff. And I've often heard her tell stories or jokingly say that I should go to therapy with her, so it makes me really laugh -- the idea that Jules not only believes in [therapy] for herself but for the people around her, both to help them and as a threat because they misbehave," he says.

- There's an appearance from The Worthless Peons, a.k.a. Ted's a cappella band from "Scrubs."

- Grayson's past comes back to bite him. Two words: Love child. "We pursued this story last year and for the first two years of Josh Hopkins' character, Grayson, wanting a kid and Courteney's character being up for anything. So as writers, we had to solve that, and I didn't think we wanted to do an adoption story because Courteney did that very well on 'Friends,'" he said.

In fact, Lawrence says, that's the situation they often run into.

"One of the worst things about working with Courteney Cox is that every time you come up with what you think is a big funny interpersonal story, someone in the writer's room -- because they all loved her on 'Friends' -- will be like 'Yeah, that's like when Chandler and Monica adopted a baby... ' And I'm like 'Shut up, I'm going to kill you.' I'm not as familiar with 'Friends' as I should be. I would have watched it constantly, but one of the people that created that show fired me early on, so I stopped watching it out of spite." "You think I don't have a filter?!" Cox responds with a laugh. "YOU don't have a filter."