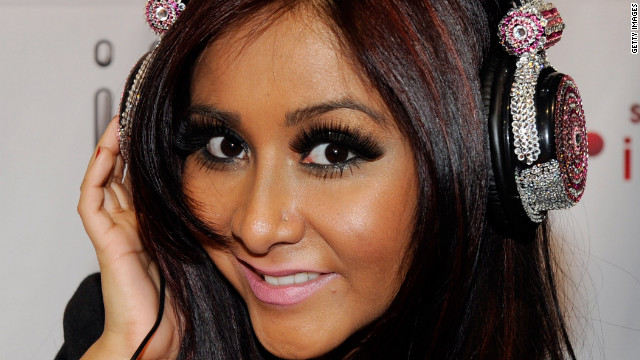 Las Vegas (CNN) -- Hundreds of onlookers crowded around a booth inside the cavernous Las Vegas Convention Center, hoisting cameras overhead and straining for a glimpse of the woman with the tiny frame and the big fake eyelashes:

The "Jersey Shore" star, more officially but less-well known as Nicole Polizzi, was at the International Consumer Electronics Show here Tuesday to promote a forthcoming line of headphones for iHip, a company that makes audio accessories.

Less than 200 yards away, a similar throng jammed the SMS Audio booth, where hip-hop star 50 Cent was appearing on behalf of his own brand of headphones. And on Wednesday, pop singer Justin Bieber was scheduled to appear at a CES event for TOSY, a robotics company that's unveiling an "entertainment robot."

Check out the new 3-D TVs

A closer look at ultrabooks

These celebrity endorsements can certainly make headlines at CES (witness this article). But will they translate into sales?

In recent years, celebs have a mixed track record when it comes to launching tech gadgets. Musician Dr. Dre has had success with Beats, his popular line of high-performance headphones. But singer Lady Gaga showed up at last year's CES to unveil a prototype of camera-equipped Polaroid sunglasses that never reached the market.

"They definitely help attract people to the booth. You see people all crowding around the booth, and they're not looking at the new Bluetooth headset or whatever, they're taking pictures of the celebrity," said gadget analyst Andrew Eisner of Retrevo, the consumer-electronics site.

"It's Vegas -- it's showtime. But whether it carries any weight (beyond CES), I don't know."

A celebrity tech endorsement makes the most sense, Eisner said, if the person has some expertise about the product -- witness all the musical artists (Ludacris also is at CES, as he was last year, with a line of headphones) creating signature audio equipment.

"It actually speaks to what I do for a living -- making music," he told CNN in reference to his headphone venture. His product line, the wireless Sync by 50 ($399) and the wired Street by 50 ($299), hit the market last month.

The rapper also understands that some star wattage can bring attention to a gadget that might otherwise get lost in the sea of gadgets here.

"CES is exciting," he said. "But so many amazing things don't have proper marketing in place yet, so people won't get a chance to see them."

Back at the iHip booth, Snooki sat at a table and smiled patiently while fans lined up for autographs and photos. She wore a leopard-print top, a short skirt and five-inch heels, and fiddled with her white iPhone between visitors. Sometimes, she sang along to the dance music being spun by the event's DJ.

Snooki was not available for interviews. But iHip spokeswoman Amanda Breault said the company approached the reality TV star to help build buzz around its products.

"We built the line around the things that she likes, like animal prints and bling. She designed everything to fit her attitude and her fashion sense," Breault said. "We knew that by having her, we could instantly attract fans, sponsors, press. The response has been tremendous."