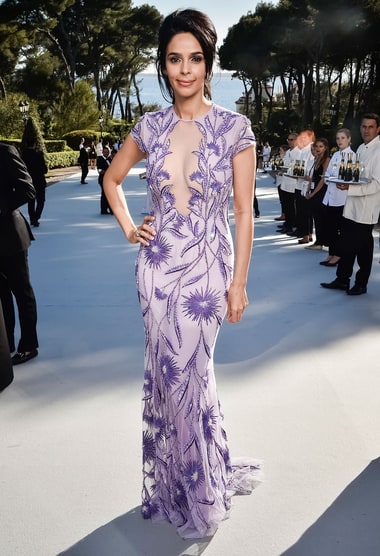 Bollywood actress Mallika Sherawat was assaulted inside her Paris apartment building by masked attackers on the evening of Friday, November 11, the office of the Paris prosecutor told CNN.

According to the news outlet, Sherawat, 40, and a male friend were tear-gassed and beaten in the hallway of her building by three masked assailants. The men fled the scene and a motive for the attack remains unknown, according to the 16th arrondissement area police. An investigation is ongoing.

The incident comes just six weeks after Kim Kardashian was tied up, locked inside her bathroom and robbed at gunpoint inside her Hotel de Pourtales apartment on October 3. According to CNN, police declined to comment on whether the reality star’s attack is thought to be linked to Sherawat’s.

The Indian-born beauty is best known for her starring roles in films such as Welcome, Aap Kaa Surroor and Time Raiders. Sherawat (real name: Reema Lamba) has posted on social media since Friday, but has yet to directly acknowledge the terrifying incident.

However, on Monday, November 14, several days after the crime, she shared an emotional Twitter video, telling fans that she was spending time in Geneva, Switzerland and staying at luxury hotel and spa La Réserve.

“It’s so important to be happy in life and to laugh every day and to count our blessings and to say thank you, thank you, thank you every day,” Sherawat — who appears physically unharmed in the clip — told her followers. “I am so grateful for my life. I thank you all for all your love and I thank God every day.”

Can't get enough of Us? Sign up now for the Us Weekly newsletter packed with the latest celeb news, hot pics and more!