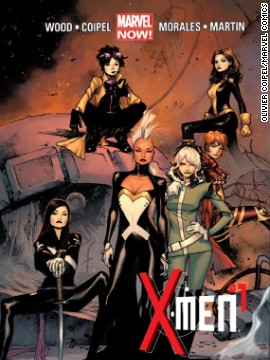 For the first time in its 50-year history, the X-Men will be made up entirely of women: Storm, Rogue, Jubilee, Kitty Pryde, Rachel Grey and Psylocke make up the mutant team in "X-Men" #1, in stores May 29. Check out more of this exclusive look at that first issue (hide captions to get the full picture). 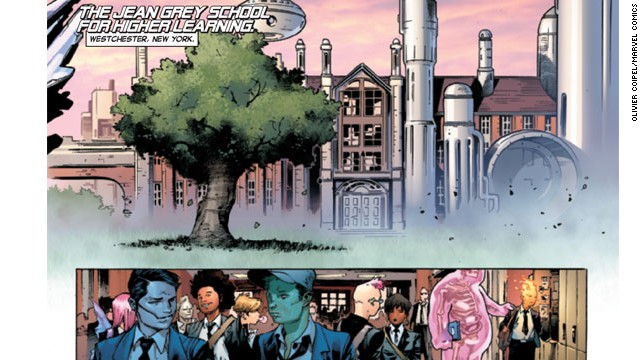 Since 2011, the school for mutants has been named after Jean Grey, the first female member of the X-Men. 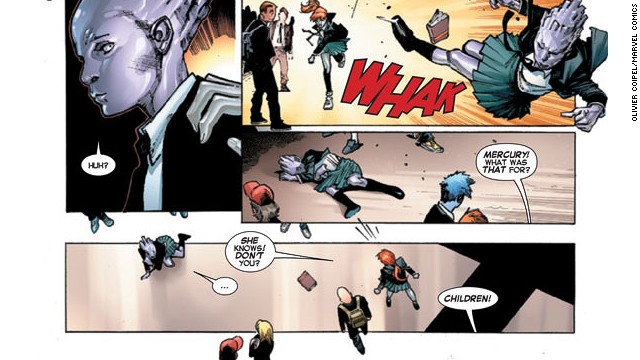 Fearless Defenders is the only other female Marvel Comics team. 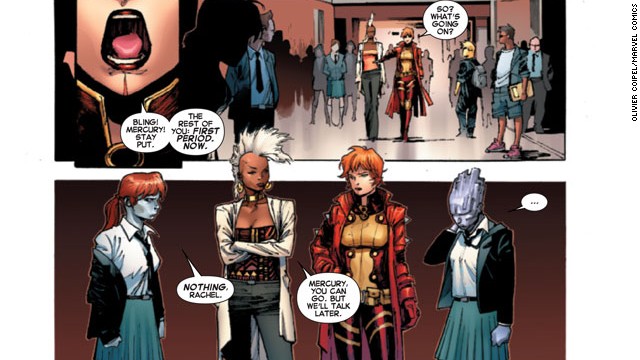 "This is 100% something I've wanted to do in my heart of hearts for years," editor Jeanine Schaefer said. 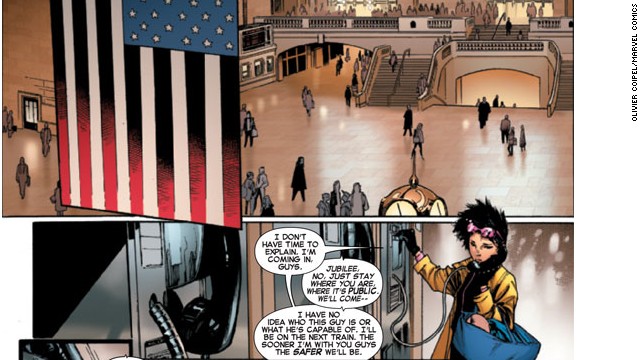 Jubilee is going to be a focus of the new series, according to writer Brian Wood. 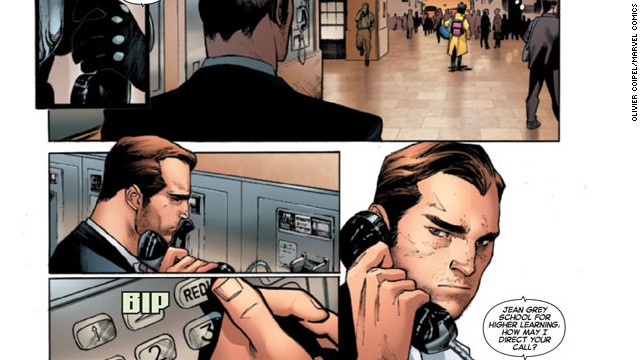 The many X-Men titles have consistently been top sellers since the 1970s. 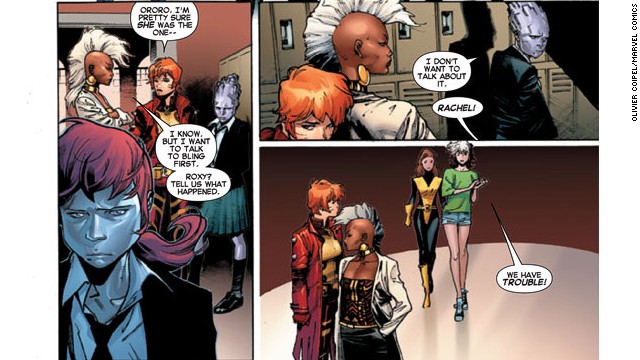 The new team is made up of popular established female characters, a testament to the strong women in "X-Men" history. 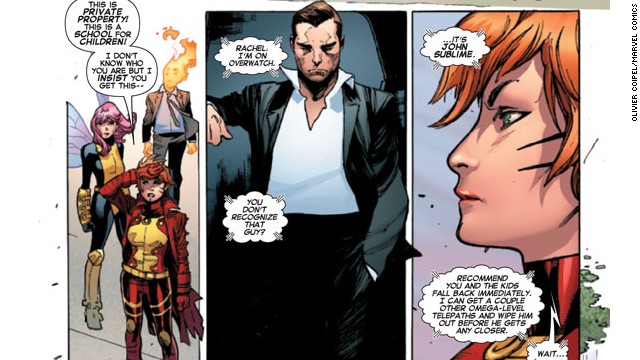 The first villain the team is set to face is a man named John Sublime. 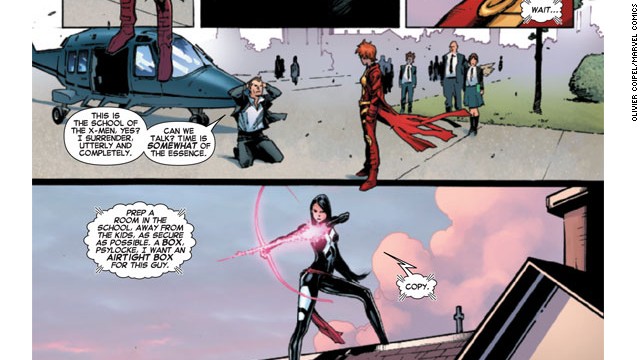 The title is the latest in the Marvel Now line, intended as jumping-on points for new readers. 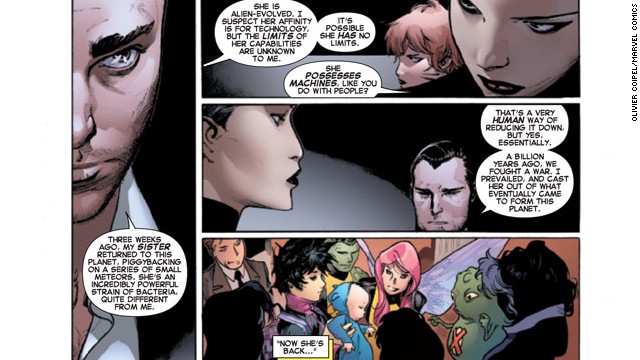 This series is a relaunch of an "X-Men" title that began in 2010. The original "X-Men" title's first issue was the best-selling comic book of all time in 1991.

(CNN) -- Perhaps they could be called X-Women.

For 50 years, Marvel Comics' X-Men have been known for being ahead of their time in terms of diversity and tackling issues of social justice.

In this week's "X-Men" #1, the team of mutant superheroes will look a little different than what fans are used to: They're all women.

Not only is it the first time that an X-Men team has been all female (in a primary "X-Men" title, no less), but Storm, Rogue, Jubilee, Kitty Pryde, Rachel Grey and Psylocke join the Fearless Defenders as one of two Marvel female super-teams. Before that, the best-known all-female super teams were DC Comics' "Birds of Prey," introduced in 1996, and 1998's indie book "Danger Girl."

(Another all-woman team was pitched to Marvel and reportedly rejected, and in 2011, the sole Marvel title with a solo female protagonist, "X-23," was canceled because of low sales, while "Red She-Hulk" will be canceled as of August).

Never before has a household name team like X-Men been turned over to only women. But the late Professor Charles Xavier's school has been named after the X-Men's first female member, Jean Grey, since 2011.

If any existing superhero team were going to be rebooted this way, it would be the X-Men, with its many strong female characters.

CNN: Did you originally set out to put together an all-female team?

Schaefer: This is 100% something I've wanted to do in my heart of hearts for years. And when Brian started on X-Men, his team was only women.

Wood: It's kind of hard to pin down exactly how it got to this. It was kind of easy to make that leap.

Schaefer: People seemed to be connecting with it. It was just the team that worked and gelled. It was the team Brian wanted to write and the team that I wanted to read. There's been a lot of talk about female characters in comics. This felt like the time was right.

Wood: X-Men is so rife with powerful female characters anyway, more so than any comic book universe or group. Our lineup is total A-listers. You can build a team with your eyes closed. All the stars aligned.

CNN: How was it decided who would make up the team?

Wood: Jeanine and I spoke for six months about this. New ideas came to us; other X-Men books were being developed. I don't know if we picked the cast first and figured how they would work together.

Schaefer: It went through so many iterations, I honestly don't know how we got here either. You love Storm.

Wood: I like Storm. I wanted her without a doubt. We were gonna bring Jubilee back; she has been absent for a period of time. These were like the best of the best characters. It made sense to pack it with big names. The characters have histories with each other which makes for a natural team makeup.

CNN: Do you think this is in keeping with the X-Men tradition?

Schaefer: This is definitely not the first all-female team in comics, but there's also a history of finding it harder to do. For me, it's tough because you want to do it. If it doesn't succeed, it gets pointed out that that's because it's a team of all women.

Wood: I've seen that happen. Even now, there's a lot of peanut gallery comments about the fact that it's a female team. It's happened before and been unfairly blamed. I think what makes this so great. Through Jeanine's hard work at Marvel, this is "X-Men" #1. If any book is gonna have a shot at it, I truly believe it's gonna stick. We're not gonna bring in dudes to bring up sales. It's gonna be a powerhouse seller.

CNN: Since this is book is part of the line, will we see any changes in some of the characters?

Schaefer: A couple of the costumes are recently new.

Wood: So far, there's one modification to one of their powers. There's a child in the mix, and that's a pretty big change.

Wood: I definitely have a lot of flexibility with Jubilee. She's a favorite character of mine. I wouldn't call her the leader, but she's definitely the focus at the beginning here.

CNN: What else can we expect in the first few issues?

Wood: There's this existing X-Men villain called Sublime, an infectious bacteria that can infect host bodies. We have that guy back as a new persona. He brings along his evil twin who becomes sort of an uber-villain. The X-Men and Sublime are forced to work together. This is an action book. This is the straight-up action comic. Everyone is dropped into fight scenes and it never lets up. If there's any one mandate, it's "bigger and more."