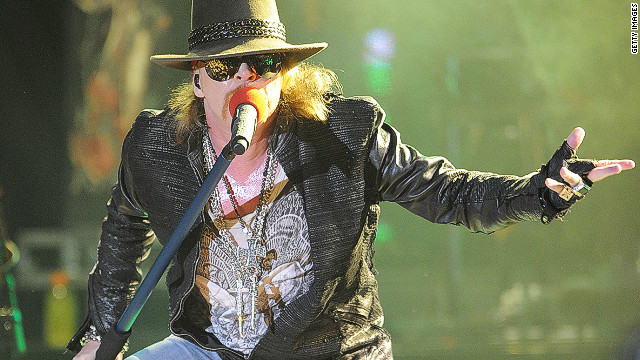 Axl Rose of Guns N' Roses performs at the Hollywood Palladium on March 9, 2012 in Hollywood, California.

(EW.com) -- Back in the summer of 1999, alternative rock bible Spin published a cover story called "What the World Needs Now Is Axl Rose" — even though he hadn't produced but a single song in over five years (the awful "Oh My God," which appeared on the soundtrack to the Schwarzenegger vs. Satan movie End of Days).

All these years and one seriously anticlimactic Chinese Democracy later, the elusive, unpredictable Axl still fascinates. He's kept fans and the media at arm's length by giving hardly any print interviews, let alone televised ones. But that all is going to change on October 24, when he appears on "Jimmy Kimmel Live!" for his first live broadcast interview in more than two decades.

Axl Rose gets stolen jewelry back

Rose will go on the show to chat with Kimmel primarily about his band's upcoming 12-night Appetite for Democracy run at Las Vegas' Hard Rock Hotel and Casino. Hopefully he'll also discuss his addiction to tardiness, his mysterious hairline, and whether or not the tracks he supposedly recorded with Shaquille O'Neal at some point in the '90s will ever see the light of day.

Kimmel does Emmy nominations in pajamas

It's telling that, upon hearing this news, one EW staffer immediately quipped, "What are the odds he actually shows up?" Indeed, Axl has never been good with deadlines, even when it comes to performing on live television. But if the show goes as planned, it will be very interesting to hear what is on Axl's mind. Will he talk about his absence from the band's induction into the Rock and Roll Hall of Fame? Will he tell stories of lost tapes and crazy re-starts during the Chinese Democracy sessions?

Steven Adler on Axl Rose: 'I'm done with him'

Perhaps he'll go into why seemingly all of his guitarists have silly names (see: Slash, Izzy, Buckethead, Bumblefoot). With Axl, anything is possible.

What would you want to hear Axl talk about? And does Kimmel seem like a good fit? Let us know in the comments.