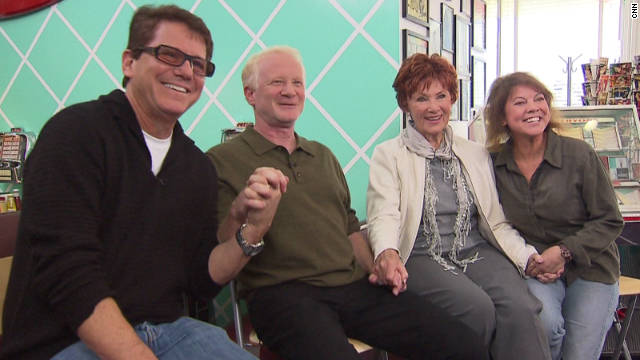 (CNN) -- A judge on Tuesday refused to throw out a case filed by four cast members from the hit 1970s television show "Happy Days," who are suing to recover money from merchandise they claimed they have never received.

Los Angeles Superior Court Judge Elizabeth Allen White denied a motion by CBS for a summary judgment, which would have ended the lawsuit. CBS owns the show.

The key issue remaining in the case is whether the actors may be entitled to payments from the sale of "Happy Days" DVDs.

White ruled that that "defendants have not met their initial burden of showing that plaintiffs are not entitled to merchandising royalties for the use of their likeness on DVD sets sold to consumers."

"The Court emphasizes that it is not making a determination on the merits of (CBS') claim, which might be proven at trial, but only that defendants have not met their initial burden" for the purpose of ending the lawsuit, White wrote.

The ruling means the case, unless it is settled, would go to trial on July 17.

Four members of the cast, Marion Ross, Don Most, Anson Williams and Erin Moran, along with the widow of Tom Bosley, sued CBS in April 2011, claiming they have not been been paid what they're owed for the worldwide sale of "Happy Days" merchandise. The series was on the air from 1974 to 1984. Bosley died in 2010.

Under their contracts, the actors were supposed to receive 5% of net proceeds, or 2.5% if their images were used in a group, the lawsuit states.

"It's a certain sense of vindication that they ruled in our favor," Most told CNN in a phone interview. "We feel obviously very pleased and happy with that ruling. It's just confirmation of what we've been claiming all along."

Asked if the cast would actually go to trial if necessary, Most said, "We didn't come this far to then all of a sudden stop. It was a big victory for us today, so we're prepared to go all the way."

In interviews with CNN last year, the actors claimed they were cut out of the merchandising bonanza from the show. Those products include comic books, T-shirts, scrapbooks, trading cards, games, lunch boxes, dolls, toy cars, magnets, greeting cards and DVDs where their images appear on the box covers.

The actors claim they never received revenue statements related to merchandising, and that CBS intentionally never intended to pay them anyway. A fraud claim had previously been dismissed by the court.

In asking the court to dismiss the case, CBS said it had paid the actors everything they were owed for merchandise and that sale of the DVDs are covered under the Screen Actors Guild agreement.

It said that agreement allows CBS to "reuse photography from 'Happy Days' to exploit the television series without making additional payments to the plaintiffs," CBS attorney Keri E. Campbell wrote in papers filed with the court. "It is undisputed that plaintiffs have received all of the residual payments for DVDs to which they are entitled."

While the actors claimed they had not been paid for all merchandise related to the show, the proceeds from the DVDs is the only remaining major issue in the case. Revenue from "Happy Days" slot machines featuring images of the actors was not as high as originally believed, plaintiffs attorney Jon Pfeiffer said. It was the actors' discovery of those slot machines several years ago that led to the lawsuit.

"The undisputed evidence shows, however, that CBS reported all revenue it received in connection with merchandise bearing the plaintiffs' name or likeness in the merchandising royalty statements provided to them and that there is no revenue that has not been reported to plaintiffs," Campbell wrote.

In court papers, Pfeiffer wrote that, in fact, all merchandising revenues have not been accurately accounted for and that, over the years, the actors did not receive financial statements related to the sale of "Happy Days" items.

Since the case was filed, Pfeiffer said CBS has sent the actors checks totaling about $10,000 each for owed merchandising payments. The checks are being held by Pfeiffer's law firm pending the outcome of the case.

Last year, in other papers filed with the court, CBS claimed the actors "are attempting to generate a lucrative litigation windfall by riddling their complaint with unsupported and overreaching causes of action" for fraud and breach of good faith. The company said this was "all done in a transparent attempt to introduce the specter of punitive damages" in the case.

CBS said the case was "a garden-variety breach of contract action, nothing more."

The actors accused CBS of "despicable conduct," saying "although defendants routinely rebrand their corporate images, they should not be permitted to rebrand the truth."