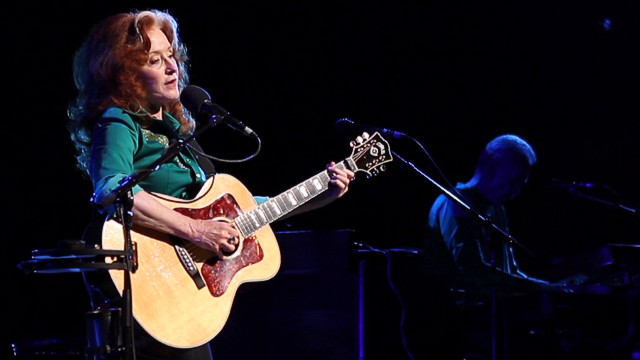 Bonnie Raitt brings her blues back

(CNN) -- Just hours before the first full-scale concert of her current tour, Bonnie Raitt stood high above the stage and reflected on the job she's held for more than four decades.

"I think it's as important to enjoy recording and being on the road as much as we do or otherwise I'd be crazy after 42 years to still be schlepping around in a bus," she said.

While Raitt has performed on and off since 2005, she put her recording career on hold for seven years to deal with the deaths of her parents and her older brother as well as other issues.

"The time that I really was off I wanted to literally be off, not thinking of what my next project was going to be," Raitt recalled.

But after a while, the passion Raitt displays in her music began to fill her again.

"I got my appetite back for it, and I started going to gigs and really missing it," she said, later elaborating, "I wanted to take that break so I would miss it enough."

As much as Raitt missed her time off from work, her fans missed her.

They've been letting the Rock and Roll Hall of Famer know it, packing concerts and propelling "Slipstream," her first album in seven years, into Billboard's top 10.

As Raitt's albums typically do, "Slipstream" contains mostly cover songs. Not that she is averse to original material. Dating back to her eponymous 1971 debut, Raitt has written her fair share of music.

But the woman who Rolling Stone named as one of the 100 best guitarists and 100 best singers ever is better known as an interpreter of other songwriters' output. Raitt said when she's looking for the perfect tunes to record, she relies on a lot of research, hard work and luck.

"[I] ask my friends -- other musicians I respect -- who they're listening to that's kind of under the radar in their town, in their area," she said. "I call people in Ireland and Australia, and go back and listen to my old CDs, and vinyl. It's really hunt and peck. Some of the ones I've had for a while, and I'm thinking about waiting for which record will work."

The first single off of "Slipstream" is a cover of the late Gerry Rafferty's 1978 hit "Right Down the Line." Raitt attributed that selection to "one of those magical moments."

"[I was] walking around in a mall or you know, in a restaurant, and that's how I found the Gerry Rafferty song again. I remembered how much I loved it," she said.

Raitt said she chose to recast "Right Down the Line" as "a kind of tougher reggae song." It's not the first time she's put a definitive spin on someone else's hit.

Raitt redefined Del Shannon's signature hit "Runaway," and some fans have noted that John Prine's beloved "Angel From Montgomery," which Raitt still plays during her concerts, seems like it was written for her.

Despite nine Grammys and several other accolades, Raitt's remains humble onstage and off. Before her show, Raitt joked about her age, noting she needs two pairs of glasses -- one for distance and one for reading. She added that when it comes to the latter, she gets cheap ones from the drugstore: "They're just as good."

On stage, she good-naturedly brushed off a marriage proposal from the crowd ("If you only knew! Thanks for offering"), consistently shined the spotlight on her longtime touring band and even played the sideman, letting new keyboardist Mike Finnegan sing a song toward the end of the main set.

Raitt protested that she hasn't had that many hits ("That would be daunting if you had like 30 and you had to do most of them all the time. It would get kind of old,") but she knows certain songs of hers are classics.

" 'I Can't Make You Love Me,' 'Angel From Montgomery,' 'Something to Talk About,' you know, people who haven't seen me in a long time, they love those songs, and they're the ones who paid for the tour bus," she said.

While in some respects Raitt is a pragmatist, her dreams for a better and safer world have spawned a passion for political activism.

Last summer, 32 years after Raitt helped organize a famous "No Nukes" concert, she and her partners in Musicians United for Safe Energy (MUSE) -- Jackson Browne, Graham Nash, David Crosby and others -- put together a follow-up benefit to raise awareness about nuclear power concerns.

"With Fukashima and what's been going on with the accidents, and the terrorism threats, and the lack of security and solutions for waste storage, the nuclear issue is ... first and foremost on my mind," she said.

But that's far from the only cause on her mind. Raitt's website lists more than 100 nonprofit partners she encourages fans to learn more about, many having to do with music education.

While she does spread the love for other charities, she is a huge proponent of such education. Raitt noted that learning about music benefits children in several ways.

"Especially girls, but any kids exposed to music programs and arts programs, do much better on their tests. They have a better chance of going to college. They can focus better. You know, we're not just automatons learning how to work machines and do engineering and math and science. All of that's great, but you've got to build a whole person," she said.

Raitt added that she finds it "thrilling" to learn about the roots of music and culture she loves, often with the aid of the Internet.

"You get a chance to see field recordings of blues artists that I never even got to meet, and Louis Armstrong as a young man, all these recordings, you can just pretty much get an education without even going to school, even from the middle of -- you know, in the middle of some Iowa cornfield or in Africa."

To many musicologists, Raitt is a crucial link in the chain of great blues artists and she's even in the Blues Foundation Hall of Fame. She "apprenticed" with Sippie Wallace, Mississippi Fred McDowell and Muddy Waters when those storied performers were about the same age she is now. Raitt's said she's grateful that her elders didn't just teach her about music.

"They didn't really seem to care whether their fans were 500 people or you know, 50,000 at some festival," Raitt recalled. "They just seemed pretty cool and copacetic, grateful to be there, had a great sense of humor, and a wry sense of perspective."

"I'm happy to say that at 62, I think I've reached that point where stuff doesn't bother me as much, and my gratitude level has gone way up, especially having gone through the loss that I've had, and losing so many of the great artists that I was close to. They taught me how to see it with a grain of salt and a lot of humor and perspective."