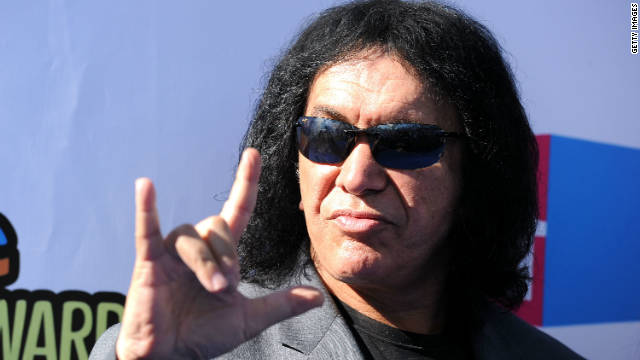 "We create jobs. This is anti-cool," Gene Simmons said about his restaurant Rock & Brews.

(Rolling Stone) -- Just hours before the opening ceremony of his new Rock & Brews chain, Gene Simmons caused a minor stir on Twitter during a "Fox and Friends" interview in which he endorsed Mitt Romney for president, claiming that "America is a business and should be run by a businessman."

Such a blatantly capitalist statement isn't surprising from Simmons -- as he told Rolling Stone minutes before he'd make his red carpet entrance with his family in tow, "I'm not outspoken, I just say things that make people say, 'yeah, you're right.' I hate Nazis like you do and I hate bulls***."

In fact, the El Segundo branch of Rock & Brews felt as much like a subtly protracted dry run for a potential Simmons 2016 candidacy as it was a restaurant opening. In part of the introductory presentation, he exclaimed "El Segundo may mean 'the second city' in Spanish, but today it's the first city!"

Admittedly, the restaurant's ambitions to connect with the city are very real if bluntly wielded -- earlier in the day, Rock & Brews had a luncheon to benefit the Wounded Warrior program, and during the presentation, two dismembered soldiers with Purple Hearts were presented with a $25,000 check. Prior to the presentation, Simmons led the crowd in the Pledge of Allegiance. "If you know it, say it with me. If you don't, shame on you," he intoned as American flags waved on television monitors.

In line with Rock & Brews' concurrent opening at the Delta Terminal in nearby LAX, it's essentially and proudly an up-the-middle sports bar with pictures of The Who on the walls; despite being a collaboration between a rock legend and a couple of big-shot entrepreneurs, it doesn't clash with the sleepy, suburban surroundings. As the introductory three-minute video came to a close, Bob Seger's "Main Street" played, a likely allusion to the fact that Rock & Brews is actually located on Main Street in downtown El Segundo.

So what the hell are we doing in El Segundo anyway? Not surprisingly, he's got words for his doubters: "They're unqualified to snicker or do much else. They've never done anything. What are their qualifications? What I'm doing here proves to every small town in America that they are every bit as cool as LA and New York. El Segundo, great place to live. Small town America is what it's all about and that's where KISS got big." Let it be known that he did insist we try the food ("there's no other way to describe it except that it rocks") and stressed the family-friendliness of Rock & Brews -- "You wanna bring your dog, your kids? Great! They can have a root beer float and you can choose from 100 craft beers. The brews are local from El Segundo and Van Nuys. We create jobs. This is anti-cool. Cool can go f*** itself."

Simmons connected the populism of his restaurant with everything from disco's inclusion in the Rock and Roll Hall Of Fame ("What an insult to the memory of Little Richard and Chuck Berry to have disco artists who don't write their own songs and play their own instruments. It's a sham to have Grandmaster Flash and Disco Bob and MC Criminal in there") to Kurt Cobain's suicide ("I say this respectfully to him -- 'f*** off'") to, well, pretty much any music made after 1990 other than Katy Perry ("I love her voice") and Madonna ("a true rock star").

Rock & Brews itself resembles a less-tacky Hard Rock Café, and if we were to call the menu fare "unpretentious," Simmons would likely be insulted that we used a four-syllable word. Though the 100 beers on tap appeared to be more of a draw than the food, servers milled about with soft pretzels, pizza, pulled pork, meatballs and fried calamari. Philosophically, this is food Simmons considers to be timeless the way "jeans, your leather jacket, your T-shirt" are.

Rock & Brews boasts absolutely no pretense whatsoever that this is anything other than brand extension for Gene Simmons. Simmons doesn't fancy himself to be a restauranteur and certainly not a connoisseur. Rock & Brews is unabashedly American and run like a business by a businessman -- "we'll have 50 in under 2 years and my goal is 500 is 5 years," Simmons said. "Ask Starbucks -- if it's good, we'll have two or three on every corner. And my track record's pretty goddamn good."