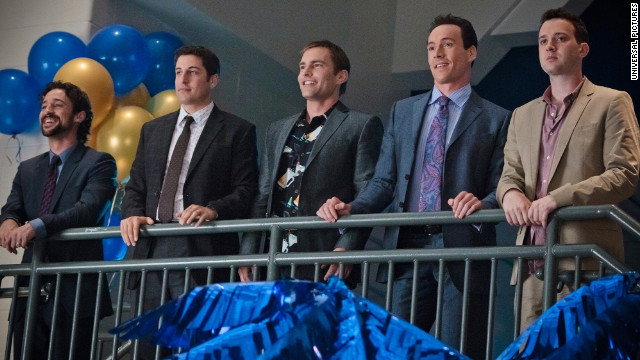 (CNN) -- Some generations get "American Graffiti" as a monument to their youthful folly: gleaming hotrods, drive-ins and Booker T. & the MGs. Others get "Saturday Night Fever," "Fast Times at Ridgemont High" or "Dirty Dancing."

"American Pie" spawned two sequels in rapid succession, taking sex-mad Jim, Oz, Stifler and pals through college and even into matrimony ("American Wedding"), but it's a surprise to reconnect with the old gang nine years later, older, milder, but still hungering for a bigger slice.

The reunion is the brainchild of Jon Hurwitz and Hayden Schlossberg, the writers-turned-directors who made their name on a different but not dissimilar series, "Harold and Kumar." The original director, Paul Weitz, has long since graduated to bigger, not necessarily better, things such as "Little Fockers" and "Being Flynn."

'Pie' cast back for 'American Reunion'

It's not a bad idea at that, even if Adam Sandler's recent "Grown Ups" covered many of the same bases. Hurwitz and Schlossberg respect the formula: whackily contrived sex gags sugared with sentimentality and a sliver of feminist sanity; multiple humiliations for the nice but naughty Jim; worse still for the cocky Stifler; and embarrassingly crude heart to hearts with Jim's loveable dad (caterpillar-browed comedian Eugene Levy). Fans will appreciate the filmmakers' dedication, and if they're not particularly adept in the execution, maybe they don't have to be: nostalgia is the most forgiving mistress.

Jim (Jason Biggs) is still married to Michelle (Alyson Hannigan), but both are mired in parental sexual frustration. Oz (Chris Klein) is now a cable TV celebrity with a model for a girlfriend. Kevin (anyone remember Thomas Ian Nicholas?) is terminally boring. And Finch (Eddie Kaye Thomas) has been around the world twice and has the scars to prove it. As for perpetual bad boy Stifler (Seann William Scott), he's assistant to a bullying business executive, but still a legendary jerk in his own puerile imagination.

Some of the girls are back too (Tara Reid, Mena Suvari, even Natasha Lyonne in an afterthought of a cameo), but predictably, the movie only pays lip service to gender equality. Younger, hotter newcomers Ali Cobrin, Katrina Bowen and Dania Ramirez get more screen time. Where Ramirez picked up her strong Dominican accent is a mystery, but along with John Cho, she's one of East Great Falls' few concessions to ethnic diversity.

The hard truth is time has not been kind to most of the cast.

They were always a funny looking bunch. Many of them were in their mid-20s but able to pass for teenagers back when the first film was shot. Today, they seem pale, pinched or gaunt -- thoroughly ordinary-looking in a way that would normally have casting agents glazing over. Only the effortlessly egregious Seann William Scott still has a viable career in leading roles, and it's hard to see Stifler as anything more than a step backward for him.

Of course, this is the film's greatest weakness and its secret strength: the unspoken appeal of a reunion is the chance to go back, measure up your peers and perhaps find that they're not doing any better than you are.

It's certainly the most endearing aspect of a spotty, crude but affectionate sex comedy that's been thoroughly superseded by the rude sophistication of the Judd Apatow comedies "American Pie" inspired in the first place.