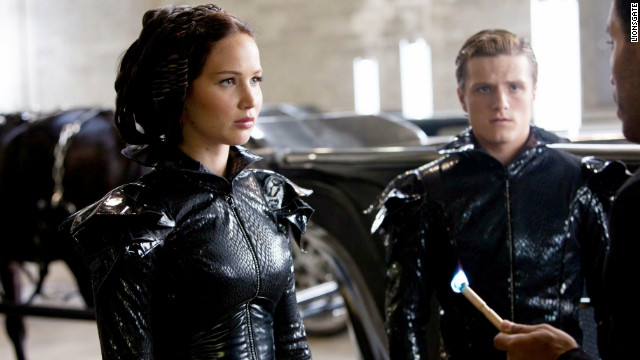 Jennifer Lawrence and Josh Hutcherson star in "The Hunger Games."

(EW.com) -- Not even Olympian gods and a very wicked witch could slow down "The Hunger Games'" exemplary box office run.

The smash adaptation, which scored the third best opening of all time last weekend with $152.2 million, dropped by 60 percent in its second frame to $61.1 million. While that drop may seem hefty, it was all but expected given last weekend's unbelievable numbers, and it was in the same range as the second weekend drops of comparable blockbusters like "Iron Man 2" (-59 percent) and "Spider-Man 3" (-62 percent), and, in fact, better than many others like "The Twilight Saga: Breaking Dawn -- Part 1" (-70 percent).

"The Hunger Games" has earned $251 million in just ten days -- the same amount of time it took "Pirates of the Caribbean: Dead Man's Chest" to pass the $250 million mark. Only three films have passed the milestone faster: the final "Harry Potter" film and "Transformers: Revenge of the Fallen" each earned $250 million in nine days, while "The Dark Knight" reached that number in only eight. (Notice those are all sequels -- "The Hunger Games" is the fastest ever non-sequel to gross a quarter billion dollars.) When all is said and done, "Hunger" will likely finish a bit below "Dead Man's Chest", which played through the school-free summer months and grossed $423 million, but it should still manage a remarkable run all the way to the $375 million range.

International results for "The Hunger Games" haven't been quite as blazing as domestic numbers. The film earned $34.8 million this weekend, lifting its international cume to $113.9 million -- still a robust result. That puts the well-liked film, which earned a straight "A" CinemaScore grade, on pace for a worldwide haul close to $600 million -- more than enough to keep Lionsgate very, very happy.

In second place, Greek mythology sequel "Wrath of the Titans" turned in a weekend that was far from immortal. Warner Brothers and Legendary Pictures' $150 million sequel grossed just $34.2 million over the Friday-to-Sunday period, off a whopping 44 percent from "Clash of the Titans"' $61.2 million debut in spring 2010. Although audiences who did see the 3-D film found it pleasant enough -- it earned a "B+" CinemaScore grade -- apparently, too many moviegoers were turned off by the ill-received "Clash" to give the franchise a second chance.

A similar sentiment marred the opening of "Ghost Rider: Spirit of Vengeance" earlier this year. Although the original "Ghost Rider" opened with $45.4 million and earned $115.8 million total in 2007, audiences were wildly unenthusiastic about the film. So when a sequel rode into theaters in February, it opened with less than half of the original ($22.1 million), and its total now stands at just $50.4 million against a $75 million budget. Ouch. Contrary to what many believe, American audiences just might care about quality after all!

"Wrath of the Titans" will need exemplary international results to justify the film's Zeus-sized costs, and although early estimates have the film playing second fiddle to "Hunger Games" in many overseas markets, "Wrath" managed an estimated $78 million internationally this weekend -- a hefty 70 percent of the wordlwide gross. Still, it's rather doubtful that "Wrath" will be able to match "Clash's" $493 million global cume. For star Sam Worthington, the lackluster debut marks yet another financial misfire after he disappointing runs of "Man on a Ledge" ($18.6 million) and The Debt ($31.2 million). He may have to rely on James Cameron's "Avatar" sequels to re-establish him as a domestic box office titan.

Relativity's $85 million Snow White comedy "Mirror Mirror" was not the fairest of them all this weekend -- the film pulled in a rather weak $19 million, good enough for third place. Relativity worked hard to get the Tarsem Singh-directed tale, which stars Julia Roberts, Lily Collins, and Armie Hammer, into theaters before Universal's June title "Snow White and the Hunstman," but the speedy strategy may have hurt the fairy tale film's chances in the long run. Early trailers made "Mirror Mirror" look like an uneven, slapped-together mess, and although the marketing campaign eventually found its footing, many viewers had likely made up their minds.

Still, the film ended up earning moderate reviews overall, and audiences issued it a fair "B+" CinemaScore grade. Relativity notes that "Mirror Mirror" was viewed primarily by families -- kids under 12 made up 37 percent of the audience, while parents of those tots accounted for 23 percent. Interestingly, the film's audience was quite ethnically diverse as well. Audiences were 52 percent Caucasian and 48 percent non-Caucasian, including 20 percent Hispanic viewers.

In fourth, "21 Jump Street" dipped by just 27 percent to $15 million in its third weekend. The smash comedic adaptation, which stars Channing Tatum and Jonah Hill, is clearly benefiting from positive word-of-mouth, and after seventeen days, its total now stands at $93.1 million. Sony's $42 million film will blaze past the $100 million mark next weekend, and it shouldn't have any trouble reaching the same level as Tatum's last hit, "The Vow," which has grossed $123.5 million thus far.

Rounding out the Top 5, "Dr. Seuss' The Lorax" chopped up another $8 million in its fifth weekend -- a 39 percent drop. The animated hit has earned $189.6 million domestically, and it should pass $200 million sometime in the next two weeks.

Two films performed notably in limited release. CBS Films' "Salmon Fishing in the Yemen," which stars Ewan McGregor and Emily Blunt, has quietly been swimming upstream for a few weeks, but this weekend, it expanded from 124 to 483 theaters and broke into the Top 10. The film reeled in a nice $1.3 million, bringing its total to $3.2 million overall. Meanwhile, Weinstein's unrated documentary "Bully" debuted in five theaters with $115,000. While the resulting $23,000 per theater average was certainly strong, it seems a bit unspectacular given the doc's massive pre-release buzz.

See the full story at EW.com.