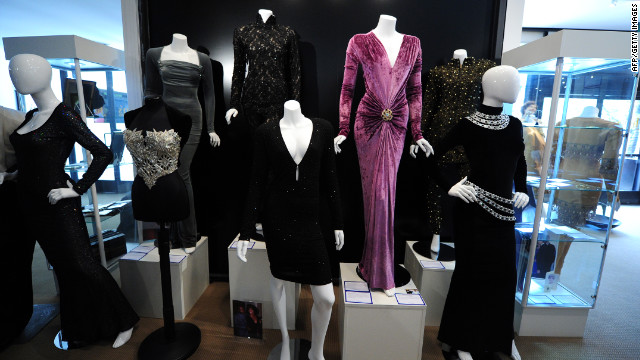 A collection of dresses worn by Whitney Houston stands on display Friday ahead of an auction in Beverly Hills, California.

Los Angeles (CNN) -- Bidders paid a total of $80,000 for clothes and jewelry once owned by Whitney Houston in a Beverly Hills auction that took place Saturday just blocks from where the singer died seven weeks ago.

Five dresses and three ensembles from Houston's wardrobe were originally sold in a 2007 auction ordered by a judge to settle a storage debt Houston owed to a New Jersey company.

A bustier embellished with elaborate beading, rhinestones and pearls brought $19,200 in bidding Saturday, according to the auction website. Houston wore it onstage during concerts, but lost it in the storage auction, according to Julien's.

The grey velvet gown Houston wore when she attended the Clive Davis Pre-Grammy Party with then-husband Bobby Brown in 1996 sold for $11,520.

She drowned in a bathtub at the Beverly Hilton just hours before she was to attend this year's Clive Davis party in the same hotel.

Two sets of earrings and a vest worn in her 1992 movie "The Bodyguard" sold for a total of $8,500, the company said. The seller got these items from the film's set designer, not the court-ordered auction, the company said.

A Clark Gable fan paid $57,600 for a jacket the actor wore as Rhett Butler in the 1939 classic "Gone With the Wind." The black and white wool herringbone jacket included a hand-inscribed tag that read "Clark Gable" and "5-9-39."

A highlight of Sunday's auction was a black felt bowler that Charlie Chaplin wore when portraying his "Little Tramp" film character. The auction house said that its "distressed and repaired condition" indicates that it "survived the rigors of the high-energy environment" of Chaplin's filmmaking. The website placed its value at between $30,000 and $40,000.

Chaplin gave these two items to a couple who maintained his Swiss villa, according to the company.