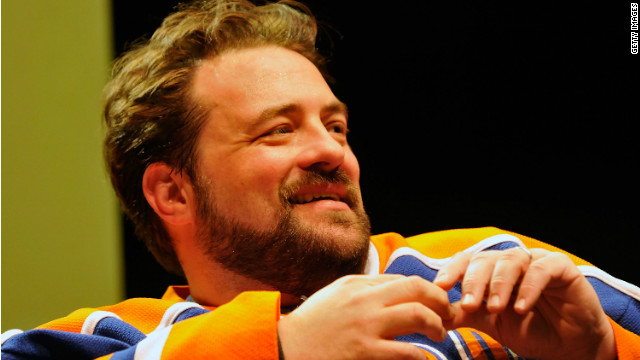 Kevin Smith is planning a stage production of "Clerks III" on Broadway in 2014.

(EW.com) -- When Kevin Smith announced last year that his upcoming hockey movie "Hit Somebody" would be his final film as a director, you could almost hear a collective sigh of disappointment from hard-core fans of Dante and Randal, Jay and Silent Bob.

Smith's convenience-store drones and derelicts introduced Smith's Jersey brand of profane wit in 1994′s "Clerks," and a successful 2006 sequel proved that audiences hadn't had enough. Smith's retirement threatened to kill any chances of completing the Quik Stop trilogy -- a challenge you'd think might tempt the "Star Wars"-obsessed Smith. Well, there is a new hope.

Last week, during a book signing in New York, he revealed that his beloved characters might be heading to Broadway. After seeing the hit play, "Seminar," which reminded Smith of the fundamental stagecraft he used to film "Clerks," he suddenly envisioned breathing new life into the franchise with a stage production of "Clerks III" in 2014 to celebrate the 20th anniversary of the original.

It's still only in early talks, but Smith tells EW that he's already broached the subject with several members of the cast, including the hard-to-wrangle Jeff Anderson, who played irreverent slacker, Randal.

The writer/director/Silent Bob shared his hopes in an exclusive conversation with EW.

Entertainment Weekly: Have you had any recent discussions -- formal or informal -- with the cast from the first two "Clerks" about another potential edition, whether it be on the stage or on the screen?

Kevin Smith: Jeff was the first person I reached out to. I sent him an email after I'd seen Alan Rickman in "Seminar" in February: "You're the first person I'm gonna tell... "Clerks III" is gonna be a play on Broadway. We'll do a six month run and sell out the entirety in advance. You up for six shows a week, sir? Live?" To which Jeff responded, "Better lay off the weed, sir."

I told Jason [Mewes], just before we went onstage to do our "Jay & Silent Bob Get Old" live podcast in London. He asked if he could be his own understudy. I haven't spoken to Brian [O'Halloran] yet, but he's the only one of us with actual theatrical training, so this will be right up his alley. I know I'll need Trevor [Fehrman] as well, because Elias from "Clerks II" will feature prominently. Rosario Dawson's Becky would feature in a pre-recorded bit.

EW: Anderson was initially cool to the idea of "Clerks II." Is Anderson just a stubborn negotiator, or does he truly lack an interest in doing this again?

Smith: It took a long time to convince Jeff to do "Clerks II," but we were both really happy with how the script turned out. Ultimately, I think Jeff would be into it if the script is good and so long as the the Weinstein Company is nowhere near it. But if we don't get Jeff, it won't happen. He's the key to "Clerks III" for me.

EW: How exactly would Clerks on Broadway work?

Smith: I'll make it as painless as I can: a six month run that culminates with a one-night performance we broadcast into movie theaters -- like we did with "Live From Behind" a few months back. So ultimately, anyone who can't make it to Broadway to see the show can go to the movie theater the night we stream the production and see if for like 20 bucks. The hardest part for me won't be making it happen; the hardest part at this point, for me, will be standing on a stage for two hours and not talking.

EW: Last we saw, Dante and Randal had purchased the Quick Stop, and Dante was going to be a father/husband. Where might they be now? What's changed?

Smith: It's finally Randal's turn to fall in love -- just as everything else falls apart.

EW: Lastly, and most importantly, would the donkey show in a "Clerks III" stage production be depicted by the same puppeteers who perform in "War Horse"?

Smith: If we can woo those f***ers over to our stables, maybe we can get Spielberg to direct the movie version of "Clerks III." Then I can direct a "Jaws" sequel without feeling like a d***.