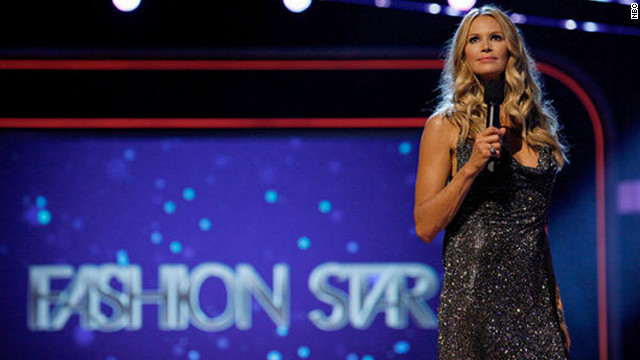 (CNN) -- Whether you're into fashion design, the culinary arts or watching famous pop stars make and break the dreams of hopeful singers, reality programming offers something for everyone.

But if the multiple series dedicated to families with up to 19 kids (and counting) have taught us anything, it's that we're fresh out of original content.

Marketed as "the future of fashion design shows," NBC's "Fashion Star" premiered Tuesday. And despite mixed reviews, the Elle Macpherson-hosted show manages an innovative feel by borrowing bits and pieces from existing series.

In other words, if "Project Runway" and "Shark Tank" were one show, that show would be called "Fashion Star."

"In 2012, there are so many channels and reality shows out there, it's hard to come up with a concept where everything is completely new," said Steve Carbone of RealitySteve.com.

On the new NBC series, aspiring designers try to sell their fashions to retailers, just like entrepreneurs pitch their ideas to potential investors on ABC's "Shark Tank." Similarly, the network's other brainchild, "The Voice," found success by adding rotating chairs and teams to "American Idol's" winning formula. (The model originated in the Netherlands as "The Voice of Holland" in 2010.)

"Let's face it," Carbone said, "after the judges turn their chairs around, 'The Voice' becomes 'The X Factor.' Each judge has a team. Each team competes every week. Someone gets eliminated. ... It comes down to which personalities you like better."

Based on "The X Factor's" recent shake-up -- judges Paula Abdul and Nicole Scherzinger and host Steve Jones all got the boot -- it's clear audiences preferred the likes of "Voice" mentors Christina Aguilera, Cee Lo Green, Adam Levine and Blake Shelton.

"(The show) doesn't feel as fresh as it could, even though everyone is touting it as a fresh new idea," Bernard said.

While Hank Stuever of The Washington Post said the show deserves a shot for it its "originality and conceptual pizzazz," the Los Angeles Times' Mary McNamara wrote: "'Fashion Star is NBC's attempt to refurbish 'Project Runway.' ... It gets old really fast. As in, halfway through the pilot."

"Fashion Star" joins past and present fashion programs like "24 Hour Catwalk," "Launch My Line," "The Fashion Show" and CBS's short-lived "The Cut."

But Lifetime's "Project Runway," which aired on Bravo for the first five of its nine seasons, remains a juggernaut in the fashion arena.

"Knock-off shows that are lame imitations usually don't work, while innovation does," Realityblurred.com's Andy Dehnart wrote in an e-mail.

This could be why the many "Bachelor" copycats, from "Joe Millionaire" to "More to Love," haven't experienced the same success as ABC's long-running franchise, which now includes "The Bachelorette" and "Bachelor Pad."

"As stupid and silly as the show is, it's absolutely the gold standard for reality dating shows," said Carbone.

None of the copycats found success, unless you include VH1 dating shows like "Flavor of Love" and "I Love New York," Carbone added. "VH1's version (of 'The Bachelor') is just a lot trashier."

"The best kind of knockoff show just uses an existing idea as a jumping-off point," Dehnart said. "'The Voice' succeeded and 'X Factor' failed because, while 'The Voice' borrowed from 'American Idol,' its format was new, different and interesting. And 'X Factor' was far too similar to what we already saw and grew tired of."

It seems, of late, there have been more green-lighted singing competition copycats than anything else. The CW and ABC's forthcoming singing competitions, "The Star Next Door" and "Duets," respectively, are certainly variations of existing shows like "American Idol," "The X Factor," "The Voice" and "The Sing-Off."

But don't count the impending singing shows out just yet, Dehnart warns.

"Success has less to do with whether a show is a knock-off than how compelling it is by itself," Dehnart said. "On some level, 'American Idol' was a knockoff of the shows that preceded it, like 'Star Search.'

Don't forget, "The Real World" featured seven or eight strangers living under the same roof for 17 years before "Jersey Shore" came along.

As long as new shows continue to add unique elements to existing reality programs, it seems they'll have a shot at ratings gold.

After all, imitation is the sincerest form of flattery.