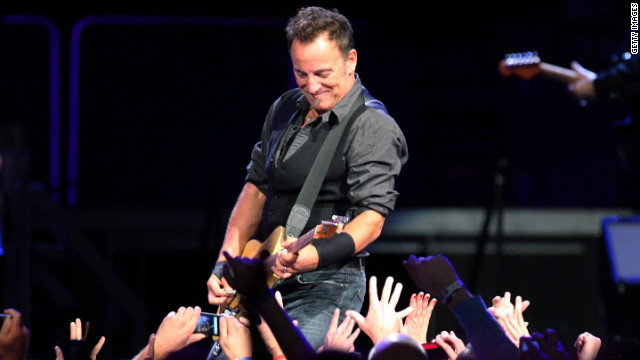 (EW.com) -- The recession has been rough on everyone -- except maybe Bruce Springsteen, who's emerged with some good material for his new album.

He says "Wrecking Ball" was inspired by Occupy Wall Street, and even though some of these songs were written before anyone pointed a bullhorn at the banks, he's smart to make that declaration. Whenever America's falling on hard times, his music simply sounds better, his lyrics taking on near-biblical significance.

Take 2000's ''My City of Ruins,'' which was originally written to help promote the revitalization of Asbury Park, New Jersey, but took on an entirely new meaning after September 11, when he began introducing it as ''a prayer for our fallen brothers and sisters.'' Or there's 2005's ''Devils & Dust,'' penned before the 2003 invasion of Iraq, which became a de facto anti-Iraq-war song after he added a coda for the troops: ''Bring 'em home!'' Whenever there's a movement in need of an anthem, it turns out Springsteen has already written one.

There's no doubt that die-hard fans will hear a fierce rallying cry on behalf of the 99 percent on "Wrecking Ball." With an awesomely rootsy production style that recalls 2006's "The Seeger Sessions," the album even sounds like a cross section of America, drawing from folk, gospel, and hip-hop.

And on "Ball's" best moments, Springsteen is fired up enough to borrow a socket wrench and knock out Lehman Brothers' teeth. The working-man paean ''We Take Care of Our Own'' recalls ''Born in the U.S.A.'' both in its upbeat E Street boogie and in its ironic message, which practically dares some Republican to misinterpret it as a campaign song. Elsewhere, the moving title track (one of the last to feature the late, great Clarence Clemons) stands among his best blue-collar anthems, with a chorus that's the perfect prayer for anyone who's been laid off: ''Hold tight to your anger/And don't fall to your fears.''

Of course, that message could just as easily apply to football fans. (He actually wrote ''Wrecking Ball'' about the demolition of Giants Stadium.) That's the problem here: The images are so broad -- every song's got a rising flood or a train of sinners or a dead man's moon -- you'll be dying for a detail that's anchored in the real world, circa 2012.

True, Springsteen's ballads have always been made of archetypes like rivers and fast cars. But he's rarely written anything as excruciatingly vague as ''You've Got It,'' which plays like Twenty Questions clues: ''Ain't no one can break it/Ain't no one can steal it.... You just know it/When you feel it.'' Though there are heartfelt tributes to the downtrodden, the only overt reference to the financial collapse comes in ''Easy Money,'' when he scoffs at ''all them fat cats.''

The money may be easy -- but the target is too. B