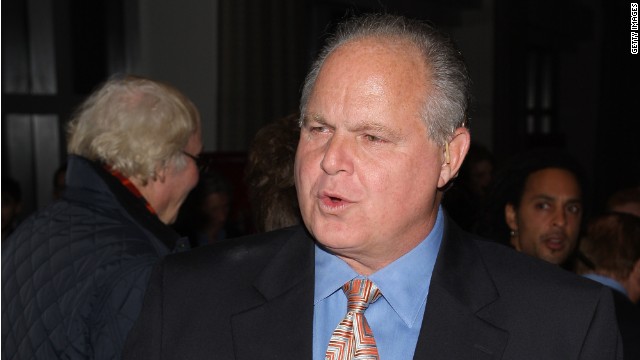 Marc Randazza says the only thing worse than having to listen to Limbaugh is the idea of using the government to silence him.

Editor's note: Marc J. Randazza is a Las Vegas based First Amendment attorney. He is licensed to practice in Arizona, California, Florida, Massachusetts and Nevada. He is the editor of the law blog, The Legal Satyricon.

(CNN) -- I despise Rush Limbaugh. I despise almost everything I have ever heard him say. I wish that he were no longer on the air. That is why I write today to defend him against those who call for him to be silenced.

Far too frequently, Americans find offense in another's art, music or other expression, and then they call for censorship. This is intolerable.

The First Amendment stands for principles like that espoused by the Supreme Court in West Virginia v. Barnette: "Of there is any fixed star in our constitutional constellation, it is that no official, high or petty, can prescribe what shall be orthodox in politics, nationalism, religion or force citizens to confess by word or act their faith therein."

Or that wisdom given to us by New York Times v. Sullivan, "Debate on public issues ... [should be] ... uninhibited, robust, and wide-open."

The First Amendment requires neither tact nor politeness. It requires that we permit all views to set up stalls in the marketplace of ideas, and we let that marketplace decide which ideas prevail.

Rush Limbaugh has a right to his views. Just as important, his fans have a right to hear him. Those of us who disagree with him have a right to fight him, but we must do so on our own. Using the government to support our view is constitutionally intolerable. Trying to bully him off the air is wrong.

Some call for the Federal Communications Commission to pull Clear Channel's broadcast licenses if they keep Limbaugh on the air, because they believe that Rush Limbaugh does not "serve the public interest." This is inaccurate and not permissible under the Constitution.

It is a terrifying prospect that the government might review the political and social positions of a broadcaster when deciding who gets access to the airwaves. Should the government censor books that it finds to be unpopular or offensive?

There is the argument that with a limited number of radio frequencies available, broadcasters should use them in the "public interest." But how would these would-be censors expect the FCC to make that determination? Should there be a "politeness test?" Would this ban programming featuring George Carlin, Bill Maher, Lenny Bruce or Snooki?

These would-be-censors want Limbaugh off the air because he does not serve their interests. That doesn't mean he doesn't serve a "public interest." There is no clearer "public interest" than the dissemination of political speech. Limbaugh brings together millions of listeners who share his views. If that is not the "public interest," then what is?

Another way to get Limbaugh off the air is to try and pressure his syndicator or his advertisers -- gathering people of like mind to use their collective economic power to force Limbaugh off the air. This is constitutionally tolerable, but morally wrong. If you disagree with someone who is on stage, it is wrong to stand up and yell to drown out his voice. This improperly interferes with your fellow citizens' right to receive information.

Limbaugh's audience has a right to hear him. Drowning out his voice by organized bullying is no way to pay tribute to our most cherished liberty. It may be your right to do so, but it doesn't make it the right thing to do. Should the marketplace of ideas lose a stall because someone in it said some "naughty words?"

Justice Oliver Wendell Holmes Jr. wrote: "When men have realized that time has upset many fighting faiths, they may come to believe even more than they believe the very foundations of their own conduct that the ultimate good desired is better reached by free trade in ideas -- that the best test of truth is the power of the thought to get itself accepted in the competition of the market, and that truth is the only ground upon which their wishes safely can be carried out. That at any rate is the theory of our Constitution."

The challenge in this view is that it requires hard work on the part of those who wish to beat Limbaugh. It requires us to place our ideas into competition with Limbaugh's.

I despise Limbaugh not because he uttered one or two nasty words, but because his views are truly evil. I debate those who agree with him. I place my ideas into the marketplace, and I believe that ideas like mine will win out.

I realize that my work is difficult, and I may not even live to see Limbaugh's ideas repudiated. But my commitment to free expression requires me to engage his ideas, to parry them and to let my beliefs stand on their own -- without using the government or other improper means to tip the scales.

Free speech means tolerating views that you despise. Otherwise, one day, it will be your views that someone doesn't like.

If you don't stand up for Limbaugh's liberty today, someone may come for yours tomorrow. Discredit him, but don't silence him.

The opinions expressed in this commentary are solely those of Marc J. Randazza