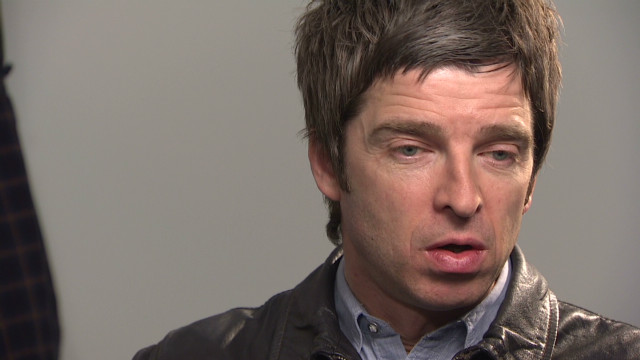 (CNN) -- "I don't know the ins and outs of his politics (but) for his procession to become President I was in America and his speeches were spine tingling. Barack Obama can talk, and coming after Bush it was something to behold. In my humble opinion, if he loses the next election to the other bunch then, good Lord, I will run myself."

So says Noel Gallagher, former creative force of British band Oasis and one of rock 'n' roll's biggest mouths. Singer-songwriter, brother to Liam and now a U.S. presidential candidate: 2012 promises to be quite a year for the 45-year-old whose song-writing talent has taken him from unemployment in a city called Manchester in northern England to sell-out stadium tours around the world, playing to millions.

By September, Gallagher will have completed the tour of his first solo album since the demise of Oasis in 2009; an expedition entailing 81 shows across Europe, the Pacific (Japan and Australia) and America as well as being a voyage into the unknown for the forthright backing-singer-now-frontman.

It was initially intended as a small affair, but such has been the demand for the new record -- "Noel Gallagher's High Flying Birds" topped the charts in the UK in October 2011-- theaters have rapidly been upgraded to arenas to cope with demand. A move that surprised the man himself and maybe explains the overriding mood of calm satisfaction the guitarist exudes from beneath a leather jacket as he sits down with a coffee to talk to CNN.

"The amount of tickets I've sold, the amount of records I've sold ... I (just) didn't have any expectations for the new record. I thought I might stall at playing theaters for a couple of years but I've gone up to arenas before the end of the first year, so I'm blown away by that.

In my humble opinion, if he (Barack Obama) loses the next election to the other bunch then, good Lord, I will run myself
Noel Gallagher

"Part of me thinks: 'Of course I'll be playing arenas because I'm f****** brilliant and the songs are f****** brilliant so it's inevitable, but the other part of me says I don't have any divine right to do that and I've got to work at it. Turns out, the former was correct! I am very grateful though."

It is not the first time the man dubbed "The Chief" by former band mates, has experienced a wave of success. Until 2009, Gallagher had been the artistic catalyst and the calmer half of the capricious brotherly partnership that saw Oasis, with their mix of Beatles melodies and Sex Pistols attitude, conquer charts around the world and become one of the planet's biggest-selling bands.

Oasis' second album (What's the story) Morning Glory? broke into the Billboard top ten and sold nearly four million copies in the United States alone. But this figure proved to be seven times the sales of the group's next three albums put together according to USA Today, a position that left many critics to argue that, unlike other British musical exports that had gone before them, the Gallagher's had not been taken to heart by the American music-buying public. It's an assertion the writer of Wonderwall contests.

"We got off on the wrong foot with Americans because they are extremely professional corporate people and we kind of treated that attitude with contempt. The only time we were ever on the cover of Rolling Stone they set aside eight hours for a photo shoot. Eight hours! I think we stayed for an hour ... and they couldn't believe it. (But) we just couldn't understand why you have to enter into theatrics with Rolling Stone magazine on a day off, because we were s***-kickers from the streets and didn't have time for that.

"Four American tours in a row were either never started or never finished (with Oasis) and we were subtitled on television because of our accents ... basically people couldn't understand a word we were saying. We also didn't have a front man like Bono or Chris Martin, we had a different kind of front-man who was like Johnny Rotten, but I don't think anybody ... would look back at it with regret, we did what we did on our own terms."

We couldn't understand why we had to enter into theatrics with Rolling Stone magazine on a day off, we were s***-kickers from the streets
Noel Gallagher

A staunch defense maybe of a band Gallagher currently has no plans to reform, but for someone so imbued with a British identity, the new album has particularly strong American sentiments. The new band includes an American guitarist, the first single release -- 'The Death of You and Me' -- has a New Orleans-style brass section, and the videos for all the singles so far -- including 'Dream On' and 'AKA ... What a Life!' -- have a 1970's Americana theme with Noel as a central figure. Despite this, when asked if this had been a conscious thematic move, Gallagher remains adamant there is no new ambition to "crack" the United States.

"(Oasis) never had a number one album, we had a number two album ... we nearly got there. I don't even know what cracking America is supposed to be though? If it's playing arenas everywhere, 10 thousand people a night then we did it. Not that I've got to justify it but we did sell out the Hollywood Bowl and Madison Square Gardens regularly and I've got gold and platinum discs (and) the house to prove it, Sonny Jim (sic). We never won any Grammys, we never got nominated, but those people like Green Day and Hootie and the Blowfish; f*** me, enough said."

The solo album has received good reviews broadly speaking so far. Rolling Stone magazine gave it 3.5 out of five with the recommendation that Noel had: "Cook(ed) down the Beatles' LSD pop into MDMA head-rushes like Oasis did, he does his old band proud. "Shout it out for me!" he declares in 'Dream On,' making you want to do just that." So did the album feel like a renaissance as it was being created?

"I've made enough of my records to know this was a pretty good bunch of songs. When I heard the final mixes, I wanted to stand behind them, they were good. Whether it gets five stars out of five or seven out of ten doesn't make it any better or worse an album for me - or if it sells 700 thousand compared to 100 thousand - it is a good album because it is.

"Every album I've ever been involved in, on the day that it came out I believed in it. Believed in them all equally but it's evident that Morning Glory and Definitely Maybe have lasted for 18 years and some of them haven't. We won't know where this sits in the canon of what I've done for another five years but I'm confident it will be up there though, in fact I know it will."

The music on the new album breaks new ground for Gallagher, both in musical terms -- the Dixieland band on 'The Death of You and Me' and the driving, repetitive beats of 'Everybody's on the Run' and 'AKA ... What a Life!'-- and in the song's lyrical content. They verge, even revel, in romance.

"I don't know how that happened! My wife would say I'm not romantic at all but I would say that I'm the ultimate romancer because I write about ... life being brilliant. Not like the Indie (independent) music scene where I come from, they like to sing about the news don't they? There's nothing good on the news. You're not telling me CNN is all cats in trees are you? Nothing can be that good if Piers Morgan is in it, you know what I mean?

"So the themes (of the album are) escapism, love, romance; to be on a journey - though I don't like that word, people say that on reality shows don't they - you know when a fat person becomes skinny they've been on a amazing journey. No they haven't, they've been on an amazing treadmill. Basically, the album includes brilliant and very well crafted songs, deceptively fantastic lyrics, all brilliantly played with the minimum of fuss and which are criminally underrated particularly in America," Gallagher surmises in unabashed appraisal.

But though his unshakable faith in his music remains the same as his halcyon days with Oasis, touring is now a different proposition. As a father of three life on the road now also means life apart from his young family too.

"The boys (Donovan and Sonny) don't like me going away but I can't wait until they're old enough so I can explain to them: 'You see all this all this multi-colored stuff (in our house), where do you think it comes from? Well, it doesn't come form Father Christmas, somebody's got to work for it and that somebody is me. So you jog on and go to bed and I'll see you in a month.'"

And with that Noel Gallagher leaves the room to prepare for his latest arena show, played on this occasion in the Scottish city of Glasgow, a stone's throw from the tiny venue where Oasis were first discovered all those years ago. Maybe now it is time for establishment acceptance of Gallagher in America, even if it is not in the White House.