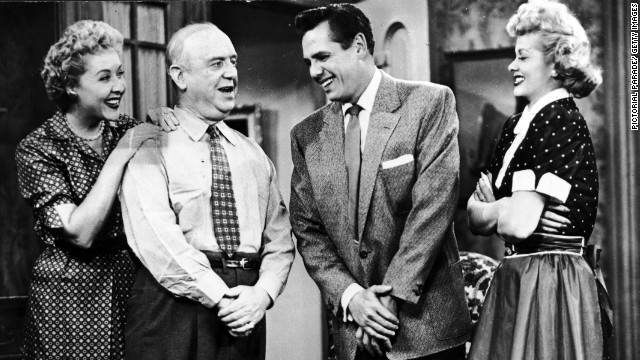 "I Love Lucy" pioneered the multicamera approach to situation comedies.

(CNN) -- The most influential show in the history of television never finished a season among the 20 most popular programs in the Nielsen ratings.

In its most popular season, "Hill Street Blues," which ran from 1981 to 1987, came in 21st place. And yet, according to a group of veteran TV critics and college professors who study the media, it was the TV series that most changed the direction of television programming.

Meanwhile, other series such as "ER" and "CSI: Crime Scene Investigation," both monster hits that were the most popular shows in several seasons, failed to get even one mention from the panel of a dozen professional TV watchers queried by CNN.

In all, 46 shows were cited as having a strong influence on TV but none was mentioned as often as "Hill Street Blues."

That NBC series "paved the way for TV drama to grow up and be truly adult," said Matt Roush, TV critic at TV Guide Magazine.

It was "the prototype for a serious complex view of inner-city crime," added Elayne Rapping, professor of American studies and media studies at the State University of New York.

Others cited its large diverse cast at a time when this was a rarity and said it laid the groundwork for complex network dramas.

Here are the next most influential shows chosen by the panel:

This is the show that pioneered the multicamera approach to situation comedies, said Ken Tucker, TV critic for Entertainment Weekly. It created "the template for all sitcoms to come," added Neal Justin of the StarTribune in Minneapolis.

Up until it got on the air, "nobody had ever tried to make a show in which the protagonist was not merely unsympathetic, but actually evil," said Glenn Garvin of The Miami Herald. "Now, from 'Dexter' to 'Sons of Anarchy,' it's a common practice."

Whether with Steve Allen or Johnny Carson, it "established the model for late-night talk comedy programming still in use today," said Robert J. Thompson, professor of television and popular culture at Syracuse University.

It set a standard for sitcoms because "it managed to mirror all the tensions and contradictions, both essential and timely, of life in America while it boldly addressed a time of great political change," said Mary McNamara, TV critic for the Los Angeles Times.

Though it premiered in the summer, said Mark Dawidziak of the Plain Dealer in Cleveland, its huge success "led to the reality boom of the last 12 years and paved the way for series like 'American Idol' and 'Dancing With the Stars.' "

Not only was this the top-rated show for five consecutive seasons but panelists give it credit for reviving the situation comedy and for being the first series to feature a family headed by black professionals.

This long-running show finished in first place for three consecutive seasons, establishing the format for all TV newsmagazines to come. Meanwhile, says Dave Walker of the Times-Picayune in New Orleans, "it inadvertently turned TV news from a public service into a profit center."

Panel members praised its fresh approach to ensemble comedy, which looked deceptively simple. "It made network executives think that any show built around five or six attractive people would be a hit," said Maureen Ryan, TV critic for AOL.

It invented morning television and woke up network executives to the profit potential at that time of day.

Though TV had amateur talent shows before, such as "Star Search" and "Arthur Godfrey's Talent Scouts," this series demonstrated the enormous potential of the genre.

Several panelists gave a nod to MTV's "Real World" for creating the modern reality show in which nonactors are placed in pre-planned situations.

Other shows receiving honorable mention for their influence on the TV industry: "M*A*S*H," "The Simpsons," "The Mary Tyler Moore Show," "Law & Order," "Lost," "Your Show of Shows," "The Milton Berle Show," "Sesame Street," "The Shield," "American Bandstand" and the UK original version of "The Office."

For this story, CNN consulted the following experts: