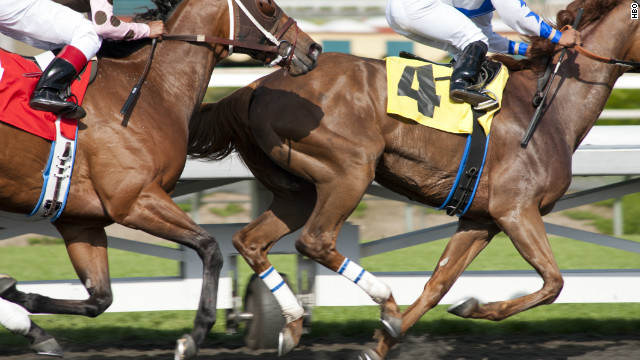 A scene from the February 19 episode of "Luck."

(EW.com) -- Filming that does not involve horses will continue on HBO's critical fave "Luck" while the American Humane Association investigates the death of a third animal on the show's Southern California set.

The first-year drama from David Milch and Michael Mann has already earned a second-season pickup, so production was underway on the second of 10 new episodes when a horse was injured and euthanized Tuesday at Santa Anita Park in Arcadia. The animal reared and fell back while on its way to a racetrack stable -- a common occurrence in stable areas every year, according to a state racing board doctor. Still, a routine necropsy will be conducted and the AHA will investigate.

An AHA safety representative was at the track when the accident occurred, and according to an HBO spokesperson, "as always, all safety precautions were in place." The rep said that the network is "deeply saddened" by the animal's death.

Last month, it was revealed that two horses died during the filming of season one in 2010 and 2011.

Nine episodes of "Luck," which stars Dustin Hoffman and Nick Nolte, were ordered for the first season; the eighth will air next week. HBO ordered 10 more for a second season shortly after the official premiere garnered good reviews and decent ratings: the debut episode attracted 3.3 million viewers during multiple airings. The audience for subsequent episodes has dwindled, however, settling in at about 600,000 viewers.