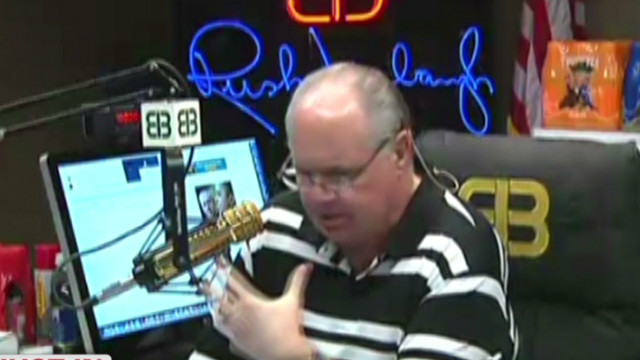 How about "lightning rod"?

Once again, Rush Limbaugh -- the conservative provocateur with the self-described "talent on loan from God" -- is in hot water. Limbaugh, who has been the leading talk-radio host for more than two decades, ignited this most recent controversy when he made comments about Georgetown law student Sandra Fluke, who had testified as an advocate for contraception at a Capitol Hill hearing.

"What does it say about the college co-ed Fluke, who goes before a congressional committee and essentially says she must be paid to have sex?" Limbaugh asked on his show last Wednesday. "What does that make her? It makes her a slut, right? It makes her a prostitute. She wants to be paid to have sex. She's having so much sex, she can't afford the contraception. She wants you and me and the taxpayers to pay her to have sex."

His remarks set off a major outcry, prompting top Republicans and Democrats alike to denounce the famed talk show host.

Limbaugh apologized Saturday, saying his "choice of words was not the best, and in the attempt to be humorous, I created a national stir."

He added, "I sincerely apologize to Ms. Fluke for the insulting word choices."

The damage, however, has been done. Eight companies, including AOL, Quicken Loans and ProFlowers, have announced they will pull ads from Limbaugh's show, the No. 1 radio show in America.

What effect this will have on Limbaugh -- and the 600-plus radio stations his show airs on -- is anyone's guess.

Limbaugh's situation is complicated by the politics of his show, said Michael Harrison, founder and publisher of Talkers magazine, which covers the talk industry.

Talk radio "has such a high profile and so much buzz factor, people tend to give these big-time talk-show hosts" far more sway than they actually have, Harrison said. "People who see things through the political lens only see things politically."

But politics is only part of the story, he said.

"The fact is, he's primarily an entertainer."

The Fluke controversy is far from the first time Rush Hudson Limbaugh III has made controversial statements -- or backtracked.

In 2006, Limbaugh mocked Parkinson's-afflicted actor Michael J. Fox after Fox appeared in a political commercial for Missouri Sen. Claire McCaskill. He later offered a conditional apology: "I will bigly, hugely admit that I was wrong, and I will apologize to Michael J. Fox, if I am wrong in characterizing his behavior on this commercial as an act."

Three years earlier, Limbaugh resigned from ESPN's "Sunday NFL Countdown" after igniting a controversy with statements about African-American quarterback Donovan McNabb. "My comments this past Sunday were directed at the media and were not racially motivated. I offered an opinion," Limbaugh said. "This opinion has caused discomfort to the crew, which I regret." 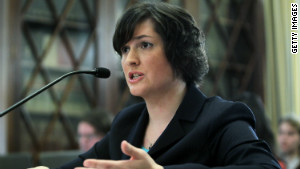 Limbaugh has also mocked presidential children Amy Carter ("the most unattractive presidential daughter in the history of the country") and Chelsea Clinton (comparing her to a dog). Both times, he apologized, though some critics questioned the spirit of his regret.

His words still carry weight within the Republican Party, and just as often raise the hackles of his ideological opponents.

Limbaugh often glories in their fury, letting fly with such terms as "feminazis" ("Feminism was established so as to allow unattractive women easier access to the mainstream of society," he once said), "caller abortions" (disconnecting unwanted callers), "banking queen" (for the openly gay congressman and House Financial Services Committee member Barney Frank) and "state-run media" (mainstream media).

Indeed, before a number of advertisers had announced their intent, Limbaugh doubled down on the Fluke controversy. After President Obama called the student, Limbaugh mocked the story on his show.

"The president called her to make sure she's OK," Limbaugh said. "What is she, 30 years old? Thirty years old, a student at Georgetown Law, who admits to having so much sex that she can't afford it anymore."

Limbaugh has been stoking passions since he first went on the air as a talk-show host in 1984, replacing the equally outrageous Morton Downey Jr. in Sacramento, California. Previously, Limbaugh -- part of a noted southeast Missouri Republican family -- had worked as a music DJ under the name Jeff Christie and as director of promotions for the Kansas City Royals. In Sacramento, he found his exaggerated "El Rushbo" persona and set about raising ratings and emotion in equal measure. By 1988, he had moved to New York and his show went national.

He quickly became a star, reaching more than 5 million listeners for his "EIB Network" by 1991. (Current numbers are difficult to determine, says Harrison, but Talkers believes Limbaugh reaches 15 million people a week. Others question the figures.) "EIB" stood for "Excellence In Broadcasting" -- a typical mock-heroic Limbaugh touch befitting his golden voice.

Even those who disagree with him acknowledge his radio talent.

"Rush is just an amazing radio performer," "This American Life" host Ira Glass told The New York Times Magazine in a 2008 Limbaugh profile by Zev Chafets, who later wrote a Limbaugh biography. "Years ago, I used to listen in the car on my way to reporting gigs, and I'd notice that I disagreed with everything he was saying, yet I not only wanted to keep listening, I actually liked him. That is some chops. You can count on two hands the number of public figures in America who can pull that trick off."

The power of the bully pulpit

Limbaugh also became a power within the Republican Party, using his bully pulpit to promote conservative views and denigrate Democrats and their fellow travelers. The GOP appreciated the boost, naming him an honorary member of the 1994 "Contract With America" congressional freshman class.

He branched out, writing best-selling books -- the first two were titled "The Way Things Ought to Be" and "See, I Told You So" -- and starting a syndicated TV talk show, which was produced by future Fox News head Roger Ailes.

Limbaugh's popularity naturally led to detractors. Perhaps the most publicly outspoken was comedian Al Franken, who ripped Limbaugh's books with his own, titled "Rush Limbaugh Is a Big Fat Idiot and Other Observations." That book, along with regular Comedy Central appearances opposite such political personalities as Arianna Huffington, helped establish Franken as a left-wing force. The Democrat is now one of Minnesota's U.S. senators. 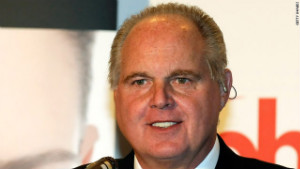 Limbaugh's show is the No. 1 radio talk show in America.

Given the mockery Limbaugh dishes out, his personal life has left him open to jokes. He's been divorced three times; he married his fourth wife, Kathryn Rogers, in 2010. He's struggled with weight problems. He suffered from addiction to pain medication and was named during a 2003 investigation into a black market drug ring in Palm Beach County, Florida.

He also was detained by drug enforcement agents in 2006 after returning from the Dominican Republic. The agents confiscated a supply of Viagra; the prescription was not in Limbaugh's name.

Democratic Party leaders have also found Limbaugh a useful target, making him the center of a 2009 advertising campaign.

Over the years, several Republicans have backed off positions on issues after being taken to task by Limbaugh. In 2009, Rep. Phil Gingrey, R-Georgia, criticized Limbaugh and fellow conservative talk-show host Sean Hannity for their attacks on the congressional GOP leadership; he apologized within 24 hours.

Other Republicans have spoken out against handling Limbaugh with kid gloves. "The problem I'm having with the party right now is when he says things that I consider to be completely outrageous, I would like to see other members of the party do likewise, and they don't," former Secretary of State Colin Powell told CNN in 2009. Powell had been a subject of Limbaugh's gibes.

Talkers publisher Harrison -- who describes Limbaugh personally as "basically a shy man," sensitive to slights but "intelligent enough to have overcome his emotions and stay out of the public profile" -- believes that Limbaugh will weather this storm, as he has so many others.

"I suspect he will come through this, because Limbaugh is not an elected official, he's not a clergyman, he's not a member of the government, he's just basically in the same business Ryan Seacrest is in," he said. "In the end, all of this talk helps keep him out there as one of the big controversial talk-show hosts of our time."

That doesn't mean, however, that Limbaugh is done dodging bullets. In our passionate times, a person who rouses of any sort of emotion is bound to stay a target. (On Monday, attorney Gloria Allred jumped into the fracas with an open letter calling Limbaugh's apology "meaningless.")

"Anybody in talk radio who states a political opinion gets as many enemies as they get supporters," Harrison said. "Being a celebrity today is dangerous, and being a controversial talk-show host is a very dangerous profession."