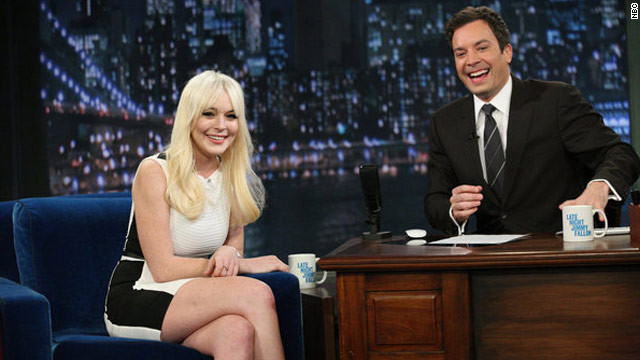 Following an interview with Matt Lauer on Today -- and in preparation for her hosting gig on this weekend's "Saturday Night Live" -- Lohan swung by Thursday's episode of "Late Night with Jimmy Fallon."

The genial Fallon asked Lohan just how, exactly, she landed the hosting gig. Lohan claimed that she'd been pestering "SNL" czar Lorne Michaels for a return trip to "SNL" for a long time. "I kept asking him," she said. "I wasn't giving up." Michaels apparently ran into Lohan in Los Angeles, and offered her the job on the spot: "You know Lorne, he's very straight to the point," said Lohan. "He was like, 'What about March 3?' I'm like, 'I'm free!'"

The ever-excitable Fallon was kind to the eternally beleaguered starlet, focusing his questions mostly on "SNL" and on her just-announced role as Elizabeth Taylor in an upcoming Lifetime movie. "What's the name of the movie?" asked Fallon. "Liz and Dick," said Lohan, who endearingly couldn't understand why the audience immediately erupted into laughter. (Oh, get your mind out of the gutter!) From there, Fallon lightly skipped over the last eight years of Lohan's career, guiding the conversation into an mutual reminiscence about the very first "Debbie Downer" sketch back in 2004.

If there was one awkward note in the interview, it came when Lohan asked Fallon -- apparently out of the blue -- if he'd be interested in swinging by "SNL" this weekend. (Fallon seemed nonplussed, and Lohan admitted she didn't know exactly what his role would be.) The actress stuck around to play a round of Pictionary. The clues included "Pole Vaulting," "Put Your Money Where Your Mouth Is," and "Corndog." (Oh, get your mind out of the gutter!)

It was, in short, an undeniably pleasant interview that offered absolutely no indication whether this weekend's "SNL" will be a comeback event, a trainwreck, or a postmodern trainwreck comeback event.